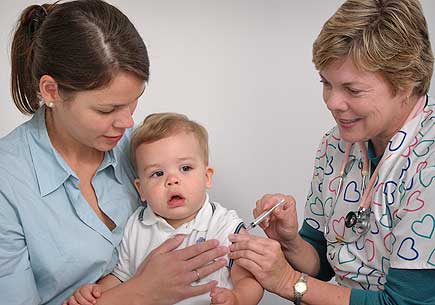 ANN ARBOR—Whooping cough has exploded in the United States and some other developed countries in recent decades, and many experts suspect ineffective childhood vaccines for the alarming resurgence.

Some say the vaccine wears off quicker than public health officials had previously believed. Others suggest that the vaccine protects against illness but does not prevent transmission of the bacterial disease, which is also known as pertussis.

But a University of Michigan-led research team has concluded that neither of these proposed mechanisms for the resurgence of pertussis is supported by the best available evidence. In a study that reviewed 30 years of data from Thailand, they found that vaccines provided long-lived—possibly lifelong—protection against the disease and substantially reduced transmission, as well.

“What we found goes against much of what is currently suspected about pertussis resurgence,” said U-M population ecologist and epidemiologist Pejman Rohani. “It’s not difficult for us epidemiologists to propose some possible mechanism behind the resurgence, but what’s been missing so far is an effort to challenge each of these hypotheses to explain the data. That’s exactly what we did.”

A paper summarizing the team’s findings is scheduled for online publication in the journal Proceedings of the National Academy of Sciences on May 20. The lead author is Julie Blackwood, a postdoctoral research associate in Rohani’s lab at the U-M Department of Ecology and Evolutionary Biology.

Thailand was selected as the study site largely because a unique high-resolution dataset of pertussis incidence—including monthly case notifications from 72 provinces between 1981 and 2000—was obtained from that country’s Ministry of Public Health. Equally detailed U.S. incidence data are not available from the federal Centers for Disease Control and Prevention, Rohani said.

The researchers expressed several of the leading hypotheses for the resurgence of pertussis in mathematical terms, then used statistical methods to test how well each of these transmission models explained the Thai data. The best fit came from a model that assumed lifelong immunity following either vaccination or naturally acquired infection.

The researchers found no evidence for a pertussis resurgence in Thailand. In fact, their findings highlighted the success of the country’s childhood immunization program, pointing to a vaccine-induced increase in “herd immunity,” a reduction in the probability of infection that occurs in a population as the number of immune individuals increases.

“We found very few cases overall, and especially in infants,” Blackwood said. “So the big underlying finding is that the vaccine is adequately protecting infants from contracting the infection.”

The situation with pertussis in Thailand cannot be directly compared with trends in the U.S. for many reasons, including the fact that the two countries use different types of whooping cough vaccine. Thailand mainly uses what’s called a whole-cell vaccine, while an acellular vaccine is used in the U.S. In addition, the vaccination schedule in the two countries differs slightly.

Pertussis is a highly infectious respiratory disease that is responsible for nearly 300,000 deaths worldwide annually, primarily among infants in developing countries. In infants, it causes violent, gasping coughing spells.

The U-M-led Thailand study was funded in part by a $1.7 million, five-year National Institutes of Health grant awarded to Rohani and U-M’s Aaron King last year. The grant funds efforts to explain the changing patterns of whooping cough outbreaks by using long-term incidence reports from several countries, along with mathematical models of pertussis transmission and statistical methods for extracting information from data.

Funding for the Thailand project was also provided by the U.S. Department of Homeland Security and the Bill and Melinda Gates Vaccine Modeling Initiative. Co-authors of the PNAS paper are Derek A.T. Cummings of Johns Hopkins University, Helene Broutin of the Centre National de la Recherche Scientifique in France and Sopon Iamsirithaworn of Thailand’s Ministry of Public Health.