ANN ARBOR—In September 2014, two University of Michigan professors received a phone call that would set them on a race to save more than a half century of African music.

Heather Maxwell, a U-M alumna and current host of the Voice of America’s “Music Time in Africa” program, had phoned to tell them that the tapes, scripts and other materials from all of their prior shows—then sitting unused at the VOA studios in Washington, D.C.—would soon be boxed up and shipped to the salt mines of Western Pennsylvania.

“We knew right away that we had to do something, and that we had to act quickly,” said Paul Conway, a U-M School of Information professor. “When a government agency sends materials to their remote storage, they generally become inaccessible, which would have been a devastating loss for a number of reasons.” 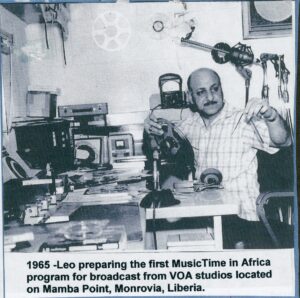 Leo Sarkisian prepares for the first “Music Time in Africa” broadcast in Monrovia, Liberia in 1965.

Conway had already been working with Kelly Askew, U-M professor of anthropology and Afroamerican and African studies, on a project to digitize a small selection of “Music Time in Africa” shows—an effort that was made possible by a long-standing partnership with VOA, and funding from various U-M sources, including the Department of Afroamerican and African Studies, the African Studies Center, the Office of the Provost and the Mcubed grant program.

After learning about the potential fate of the analog archive, Conway and Askew immediately began to search for funding and make a plan that would change their goal of digitizing just 30 shows to 900. This would involve sorting through and transferring nearly 10,000 original reel-to-reel tapes, cassette tapes and records to U-M. The archive also included additional related materials such as original scripts, fan mail, scrapbooks, posters and other ephemera.

As part of a long-term loan agreement that they worked out with the VOA, along with funding secured from the National Endowment for the Humanities, the archive would be moved to the U-M Library’s Special Collections Research Center with a condition: that the material be digitized and made available online to the broadest audience possible.

The program, which is the longest continually running radio show out of about 50 that VOA produces worldwide, is also one of the U.S. government agency’s most popular, having cultivated a massive following across the continent of Africa since the weekly half-hour show began airing from Monrovia, Liberia, in 1965. By 1968, the broadcast had moved to the VOA studios in Washington, D.C., where it has remained ever since.

“What is so incredible about this collection is that most of these tapes were aired once, and they were only aired in Africa,” Conway said. “The audio archive is essentially a time capsule that contains more than 40 years of rare African music and cultural heritage—scholars and fans can use this as a resource to track the emergence of world music, to draw connections between music and politics, and even to reference the musical differences across countries over time.” 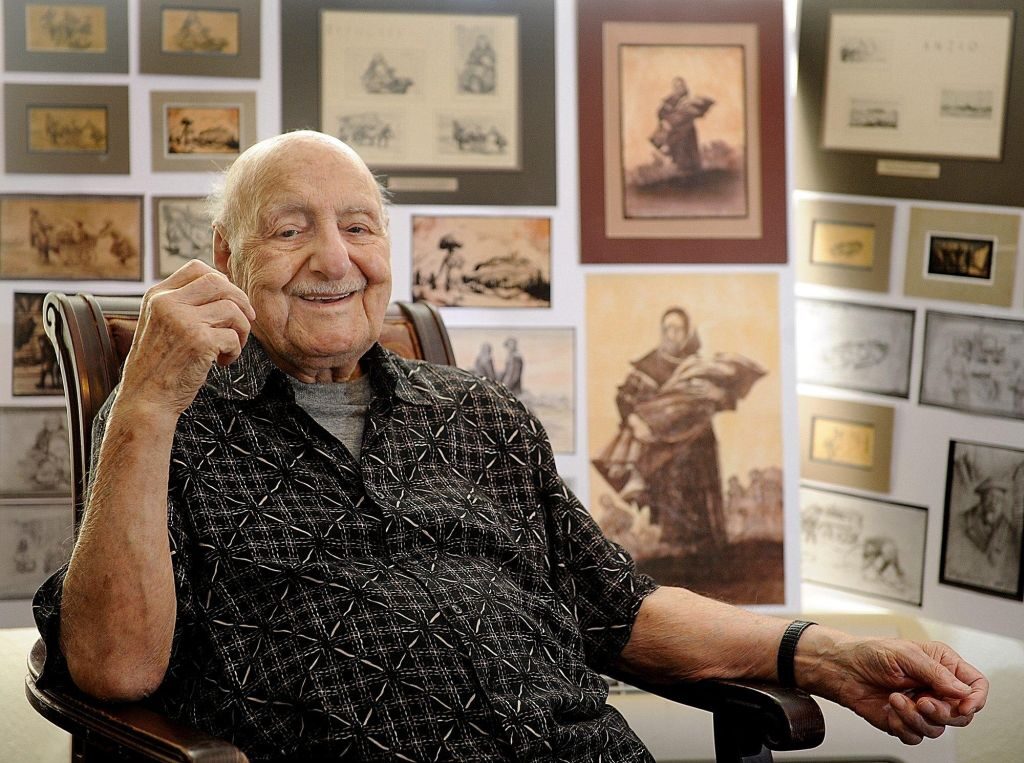 Leo Sarkisian at his home in Tewksbury, MA in 2014.

The Music Man for Africa

Leo Sarkisian, the man behind the VOA’s “Music Time in Africa” had a big personality, a love for all forms of music and dance, and a passion for bringing “African music to Africa,” according to Askew, a friend and colleague who first met him back in 1996 as a graduate student.

Arriving in West Africa in 1958, Sarkisian became acquainted with the continent while working for Tempo Records, a Hollywood-based company that hired and trained him to produce original, on-location recordings of sounds and music that could be used for film soundscapes.

Sarkisian spent nearly a decade with Tempo traveling through the Middle East and Africa as a sound engineer before being approached by legendary broadcaster Edward R. Murrow, who offered him a job at the VOA. His charge would be to create an entertainment-based radio broadcast as part of a mission to introduce American perspectives to a post-colonial Africa, which he would go on to do for nearly 50 years.

“Leo was a patriot and a decorated World War II veteran—he was committed to the idea of the United States of America, and was grateful to this country for having welcomed his ancestors who were fleeing Turkey amidst the violence that occurred there directed at Armenians,” Askew said. “As a result, he was very committed to helping America present its vision of democracy and political freedoms to other parts of the world that did not have that.”

As part of Sarkisian’s diplomacy and commitment to cultivating a Pan-Africanist community through music, he helped to set up radio stations and train sound engineers across the African continent during these years, all of whom he relied upon to contribute recordings for the program.

According to Askew, each show was composed almost entirely by Sarkisian, who would plan the content in response to major news developments and events happening at that time.

“The politics of his shows were very subtle. If a new government emerged on the African continent, he would produce a show about that country’s music—or if a big news story was developing in a particular place, he would showcase music from that region,” she said.

Though Sarkisian’s voice could be heard from time to time as part of the program, he relied on his radio hosts, including long-time fan favorite Rita Rochelle, to deliver his carefully crafted broadcasts each week.

While the program featured contemporary African music of the time, the hallmark of “Music Time in Africa”—and what makes the program so important to ethnomusicologists and researchers—are the original heritage recordings that Sarkisian himself recorded as he traveled around Africa.

“Leo, along with his wife Mary, went everywhere in Africa and recorded musicians and bands in a variety of contexts, from urban metropoles to small villages, and at intimate gatherings to transnational festivals,” said Askew, who had been working with Sarkisian to archive his field recordings that now exist as part of a separate Leo and Mary Sarkisian Collection that also resides at U-M.

She says that many of the recordings in the collection, which are all rare, original, one-off copies, contain many styles of music performance that have since been replaced by new styles and are not replicable any more.

These recordings are included in many of the shows that are part of an online archive created by Askew, Conway and a team of UMSI graduate students in recent years. Conway admits that they struggled with the ethics surrounding cultural ownership, permission and copyright issues related to this type of heritage material.

“Kelly and I spent the better part of the year in deep conversation trying to figure out how to respect the communities that produced the original music,” Conway said. “We ended up deciding to open up the digitized recordings and the associated scripts for wide use and to encourage a conversation about the memories they invoke.”

“Scholars are asking, ‘What should you give back to the people?’ Our answer has become to return the music to communities by rebroadcasting the programs using the technologies of the internet as a form of ‘digital repatriation,’ which involves returning an aspect of cultural heritage in a digital format to the communities from which they originated.” 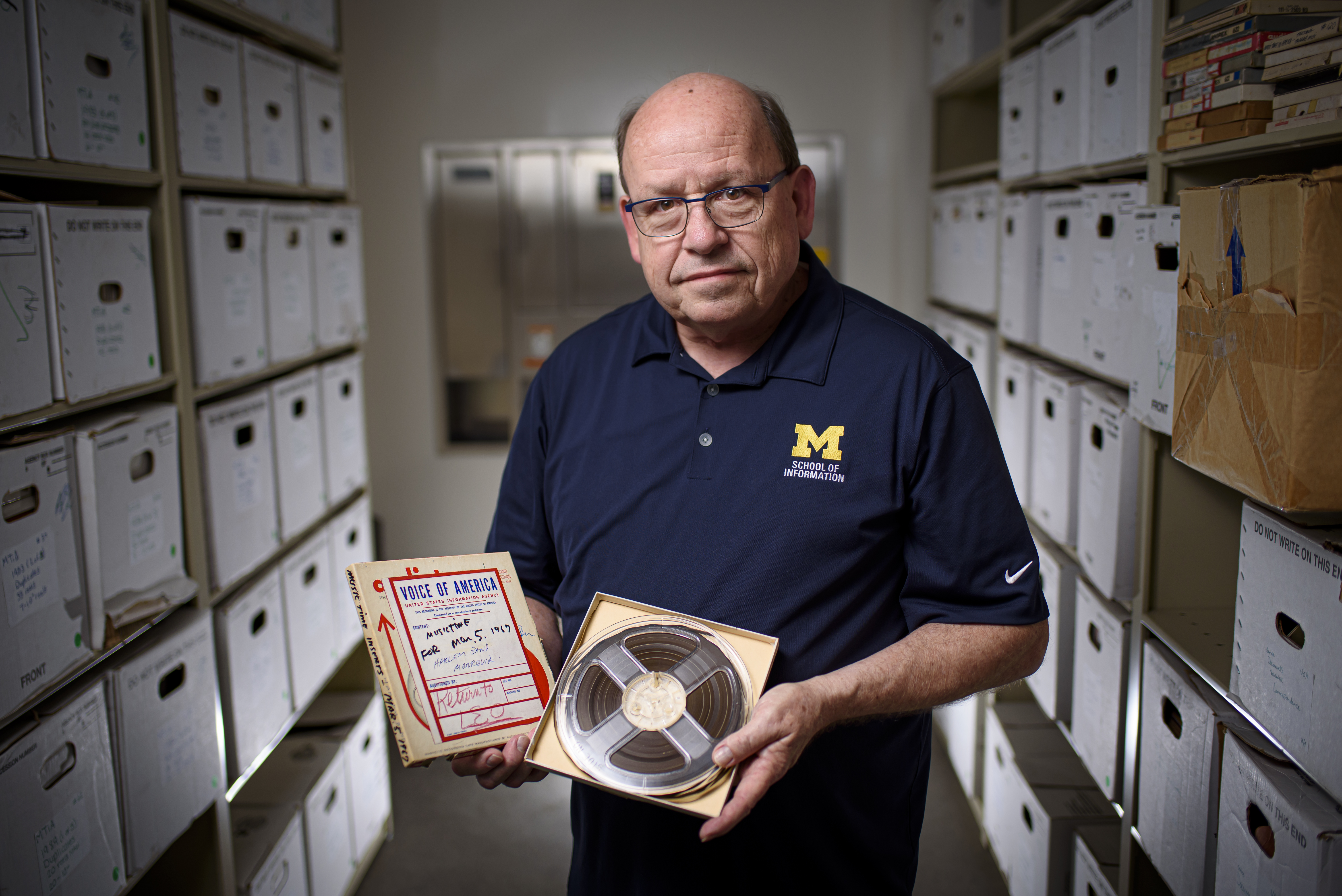 The recently published online archive (umsi.info/mtia) is now available for anyone in the world to access—something that Americans couldn’t legally do until an amendment was made to the Smith-Mundt Act in 2013 that had previously barred U.S. government-made ‘propaganda’ from being broadcast inside the United States.

“Aside from the fact that this material has only been heard once—and only on the African continent—the distinctive part of this project is that we created an interface that allows anyone in the world to search the text of the script, read the original script and listen to the radio program at the same time,” Conway said. “Our access system creates interesting possibilities for cross-connections between the written word and the spoken word, making it possible for the content to be studied and enjoyed on a deeper level than just streaming audio.”

During the Sarkisians’ years of research and travel in Africa, they collected a number of musical instruments as well, which they donated to the Stearns Collection of Musical Instruments at U-M, one of the most unique collections of its kind in the world.

“We can still engage with Leo across time, across space, across the boundary between life and death by learning from all of the work that he did and his efforts to bring these forms of music to wider audiences,” Askew said. “Being able to honor that legacy and make sure that it does not lie buried in a salt mine or elsewhere, and is used by people, that is the joy that I have found in working on this project.”