ANN ARBOR—Drivers who switch to tires with low rolling resistance can save an average of nearly $150 a year, says a University of Michigan researcher.

The U.S. Transportation Research Board estimates that a 10 percent increase in tire rolling resistance will result in about a 1.5 percent decrease in vehicle fuel economy.

Sivak examined the rolling-resistance measurements for 63 new same-sized tire models obtained by Consumer Reports at the same load and inflation pressure to calculate the fuel consumed annually by an average driver. He then calculated differences in fuel used (and money spent) between tires at the extremes of rolling resistance.

The tires represented a cross-section of the currently available T-, H- and V-speed-rated tires for light-duty vehicles on the U.S. market (maximum speeds for each of these types of speed-rated tires are 118 mph, 130 mph and 149 mph, respectively). 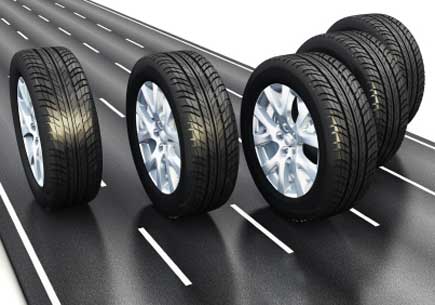 “Consequently, the obtained rolling resistance extremes yield a minimum and maximum annual fuel consumption of 505 gallons and 547 gallons, respectively,” Sivak said. “At the average 2013 price of regular gasoline, the obtained fuel-consumption results in a $147 difference in the annual cost of gasoline per light-duty vehicle.”

Sivak’s study is the first comprehensive evaluation of how much fuel a driver can save when using tires with low rolling resistance.