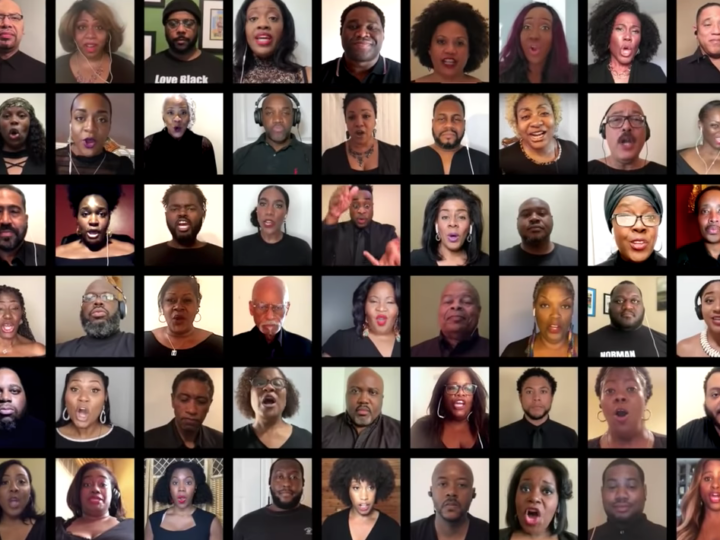 Nicole Heaston presented Lift Every Voice and Sing as arranged by Roland Carter. It was performed by a chorus of outstanding Black opera singers in honor of Juneteenth. Many U-M alumni and faculty members participated.

Louise Toppin is a University of Michigan scholar and performer who has received critical acclaim for her operatic, orchestral and oratorio performances in the United States and around the world. 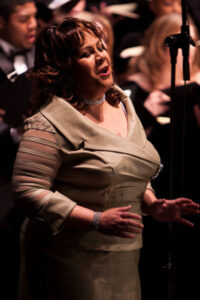 A professor of voice at U-M’s School of Music, Theatre & Dance, she also directs the nonprofit organization Videmus, whose repertoire focuses on African American, women and underrepresented composers, and is director of the George Shirley Vocal Competition for African American art song, operatic arias and spirituals.

Toppin recently participated in a conversation about the history of “Lift Every Voice and Sing,” a song that was adopted as the “Black national anthem” by the NAACP in 1919. Also participating were Mark Clague, SMTD associate professor of musicology, and Naomi André, U-M LSA professor and musicologist.

Can you talk about your personal connection to the song “Lift Every Voice and Sing”?

As an African American woman, I grew up in Ettrick, Virginia, which is the home of Virginia State University, a historically black college. Surrounding that university is Petersburg, which was a stronghold in the Civil War and the site of the Battle of the Crater. One of the main boulevards there was Jefferson Davis Highway, named after the president of the confederacy. We were also surrounded by sites named for Native Americans. Ettrick was actually a village given to Pocahantas by her father Powhatan because it was a tactical stronghold as it overlooked the Appomattox River. So this was an area that represented several cultures. I grew up around confederate flags and its symbolism, Native American symbolism, and in the middle of it was a historically black university.

“Lift Every Voice and Sing” for an African American growing up on that campus was as important as the national anthem. From lectures to sporting events to public concerts, every event began with the national anthem and was followed immediately by Lift Every Voice. Everyone sang all three of the verses from memory. The sound of so many voices raised in song was powerful.

What is the history of the song as the Black national anthem?

This anthem was originally brought to prominence by school children. I went to the laboratory school on Virginia State University’s campus and we were taught this song at a very young age. Somewhere between 1900 and 1905 in Jacksonville, Florida, this piece was written as a poem and then set to music by the Johnson brothers. The older brother, James Weldon Johnson, was an activist in the Harlem renaissance and a writer, and the younger brother J. Rosamond Johnson was a well-known composer.

After this, there was the Niagara Movement with W.E.B Du Bois in 1905, the race riots in Atlanta in 1906, the Springfield race riot of 1908, the founding of the NAACP in 1909, the founding of the Carter G. Woodson Society ASALH in 1915, Marcus Garvey establishing the first U.S. chapter of the Universal Negro Improvement Association in Harlem in 1917 in the midst of the Harlem renaissance, and finally the race riots that occurred in 25 cities across the U.S. in the summer of 1919. At that point, the song was adopted by the NAACP as the Negro national anthem. It comes from humble beginnings as a poem for children that talks about liberation and optimism, and eventually it was adopted as an anthem that spoke to all African Americans.

How has the significance of the song persisted in the midst of the current civil rights movement?

I’d love to see us sing both “Lift Every Voice and Sing” and “The Star-Spangled Banner” at events, as we did in my childhood. Listening to people sing this piece is so exhilarating. There’s a wonderful YouTube video that Nicole Heaston recently put together that features several African American singers—including some former Michigan students and colleagues—performing Roland Carter’s arrangement, which is the version that is best known and loved in churches and HBCUs. I wish that we could reignite the tradition of singing the national anthem followed by “Lift Every Voice and Sing” as the latter anthem is a hopeful call that should resonate with all Americans.