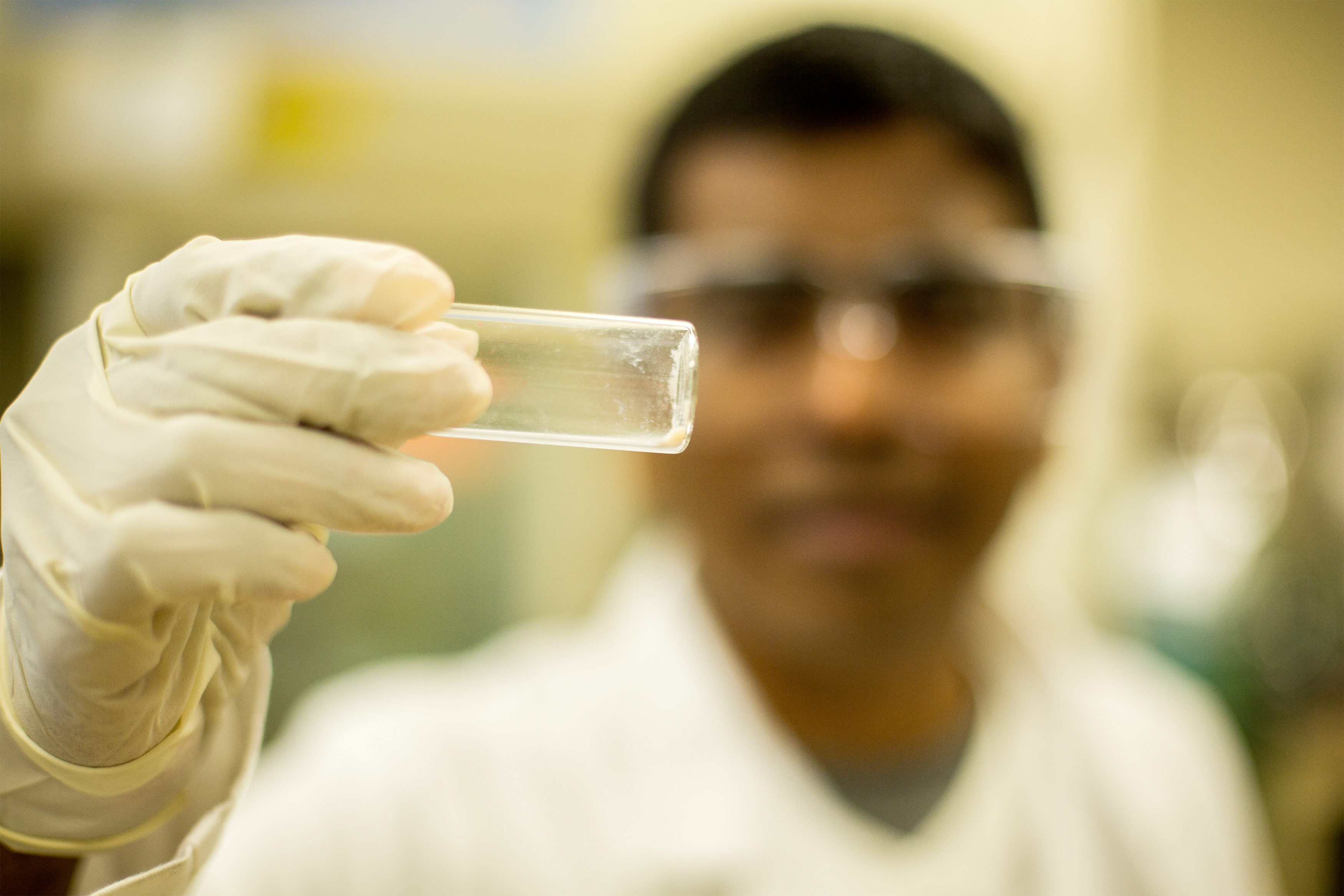 Marimuthu Andiappan, a PhD student in the Linic lab, holds up a small sample of the copper catalyst. The copper nanoparticles can use light to get rid of the oxygen bound to their surfaces, making it possible for copper to catalyze a chemical industry “holy grail” reaction. Photo: Joseph Xu, Michigan Engineering Communications & Marketing.ANN ARBOR—Wouldn’t it be convenient if you could reverse the rusting of your car by shining a bright light on it? It turns out that this concept works for undoing oxidation on copper nanoparticles, and it could lead to an environmentally friendly production process for an important industrial chemical, University of Michigan engineers have discovered.

“We report a new physical phenomenon that has potentially significant practical implications,” said Suljo Linic, an associate professor of chemical engineering, who led the study, which is published in the March 29 issue of Science.

Copper’s newfound ability to shake off oxygen attached to its surface could allow it to act as a catalyst for a long-sought reaction, causing oxygen molecules to bind with propylene molecules in the way that forms propylene oxide. Propylene oxide is a precursor for making many plastics, toiletries and other household products such as antifreeze, paints and insulating foams. To meet demand for these products, the U.S. produces more than 2.4 million metric tons of propylene oxide per year, worth about $4.9 billion.

Unfortunately, producing propylene oxide involves a complex chain of reactions that generate unwanted chemicals. The process that provides about half of the propylene oxide in the U.S. also produces about twice as many tons of salt.

A catalyst that can coax propylene and oxygen to form propylene oxide in a direct reaction, avoiding the waste, has been called a “holy grail” of catalysis. Metallic copper showed promise, but it had—until now—been written off because it tends to bind itself to oxygen, forming copper oxide, which has poor catalytic properties.

“Copper in metallic form has this unique electronic structure that activates the reaction pathway for propylene oxide more than the undesired pathways,” said Marimuthu Andiappan, a graduate student in chemical engineering and first author on the paper.

Metallic copper prefers to bind oxygen with two of the propylene’s carbon atoms, forming propylene oxide. Copper oxide, on the other hand, tends to break the propylene down into carbon dioxide or attach the oxygen to only one carbon atom, resulting in the herbicide acrolein.

However, Andiappan, Linic, and former chemical engineering graduate student Jianwen Zhang found that if copper is cleverly structured, light can reverse its oxidation. The team made copper nanoparticles about 40 nanometers across, or roughly one-hundredth of the thickness of a strand of spider silk. They peppered tiny particles of clear silica with the nanoparticles and then floated a gas of propylene and oxygen over the resulting dust. 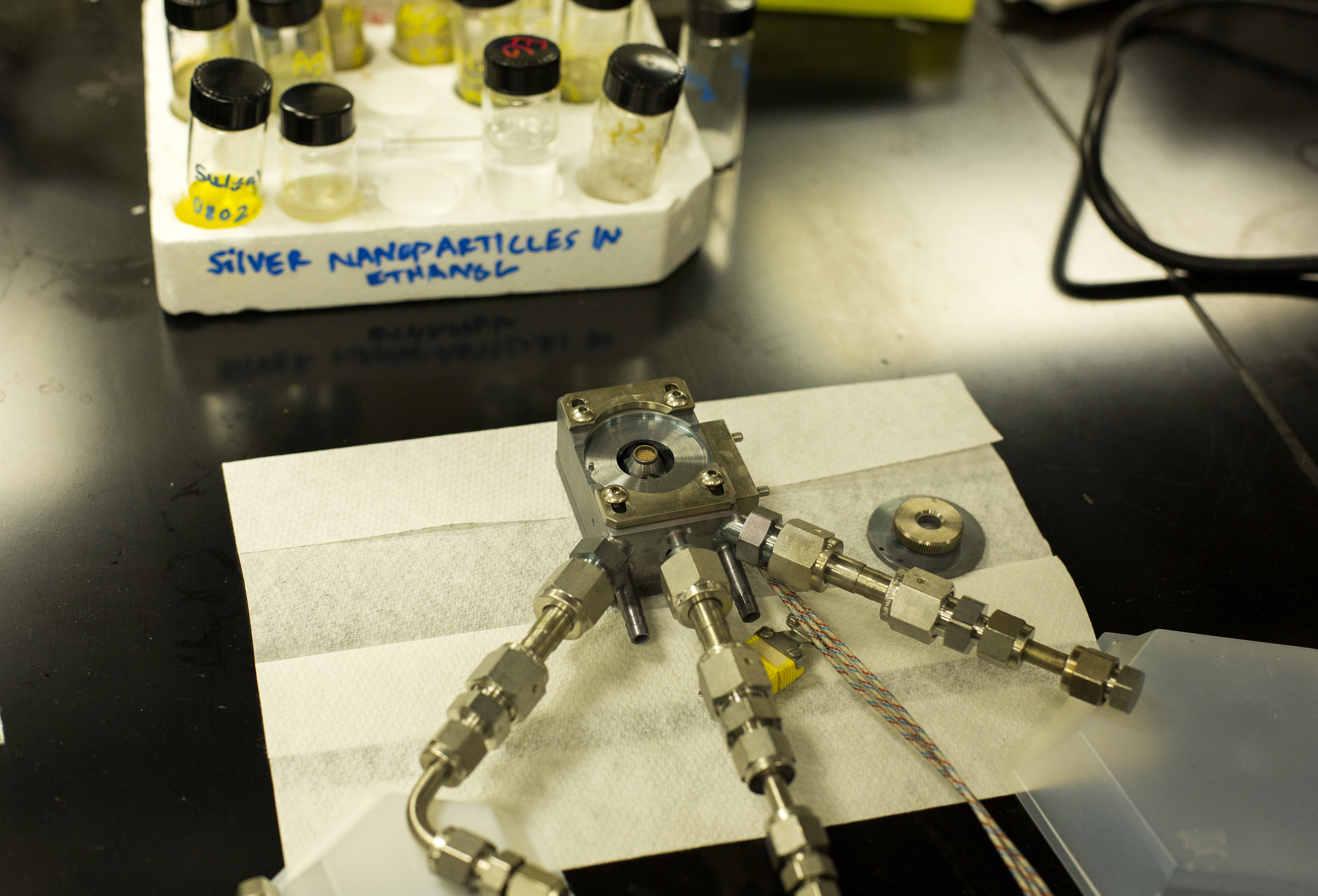 The test reactor holds the catalyst in a tiny circular bed and exposes it to propylene and oxygen gasses. When the reactor is closed, a light shines down from the top, allowing the copper to keep the oxygen from binding to its surface. The copper can instead bind the propylene to the oxygen, forming the industrially important chemical propylene oxide. Photo: Joseph Xu, Michigan Engineering Communications & Marketing.“To our knowledge, this is the first time anyone has shown that light can be used to switch the oxidation state from an oxide to a metallic state,” Andiappan said.

The metallic copper under the oxidized surface concentrated the light, freeing electrons from copper atoms. Those electrons then broke the bonds between the copper and oxygen.

A new kind of reactor that can illuminate the catalyst will be needed to bring this potentially cheap and environmentally friendly way of making propylene oxide to industry.

“Theoretically, it is possible to use mirrors to focus sunlight and get this much intensity,” Andiappan said.

“We are just scratching the surface,” Linic said. “I can envision many processes that wouldn’t be possible with conventional strategies, where changing the oxidation state during the reaction or driving reactions with light could affect the outcome dramatically.”

The paper describing this work is titled “Tuning selectivity in propylene epoxidation by plasmon mediated photo-switching of Cu oxidation state.” The study was funded by the Department of Energy and the National Science Foundation. The university is pursuing patent protection for the intellectual property, and is seeking commercialization partners to help bring the technology to market.