Like humans, the paper wasp has a special talent for learning faces 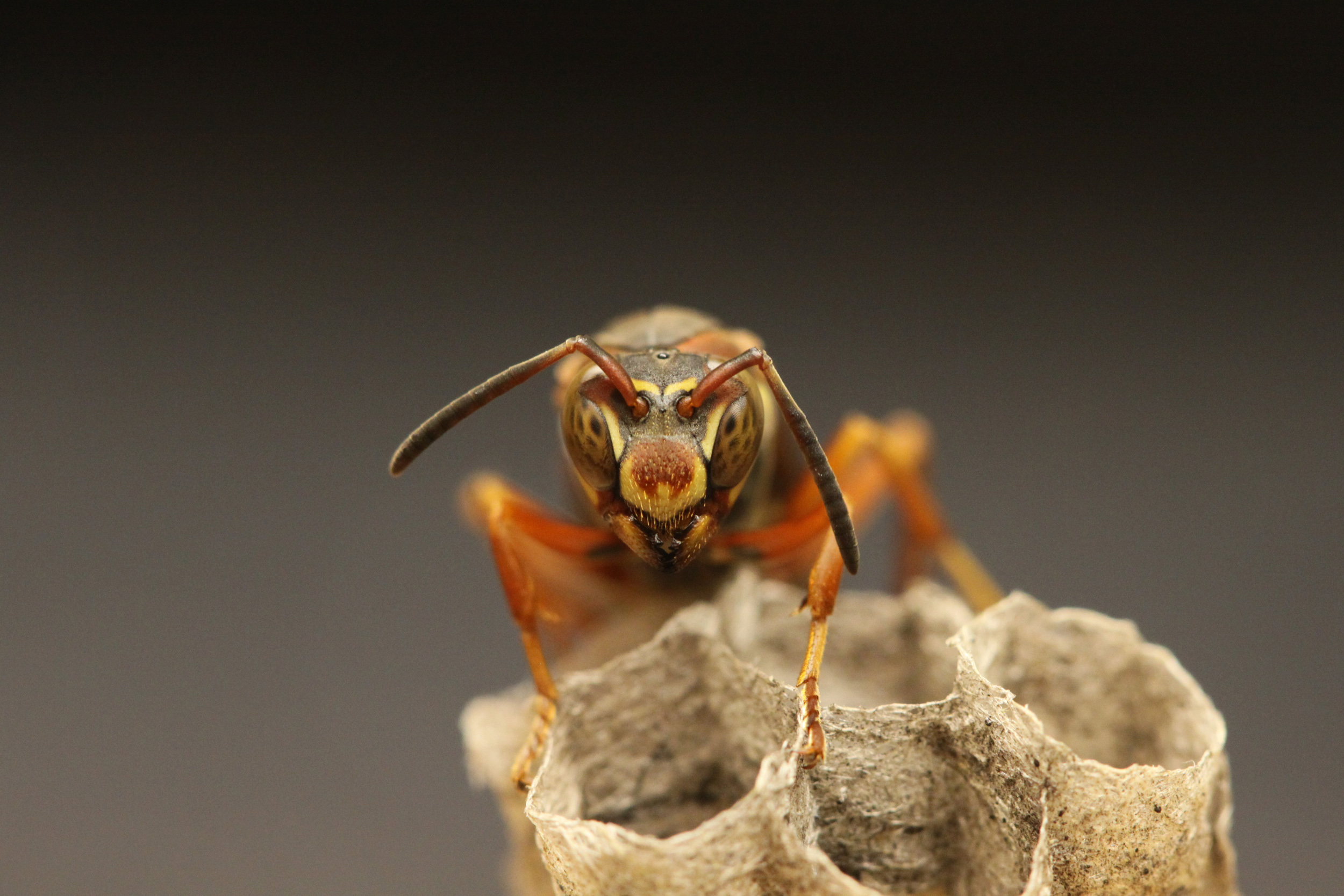 Like humans, Polistes fuscatus paper wasps recognize individuals by their unique facial patterns. This photo shows a paper wasp queen on an early nest. Credit: Michael SheehanANN ARBOR—Though paper wasps have brains less than a millionth the size of humans’, they have evolved specialized face-learning abilities analogous to the system used by humans, according to a University of Michigan evolutionary biologist and one of her graduate students.

“Wasps and humans have independently evolved similar and very specialized face-learning mechanisms, despite the fact that everything about the way we see and the way our brains are structured is different,” said graduate student Michael Sheehan, who worked with evolutionary biologist Elizabeth Tibbetts on the face-recognition study. “That’s surprising and sort of bizarre.”

The study marks the first time that any insect has demonstrated such a high level of specialized visual learning, said Sheehan, lead author of a paper on the topic scheduled for online publication in the journal Science on Thursday, Dec. 1.

In earlier research, Tibbetts showed that paper wasps (Polistes fuscatus) recognize individuals of their species by variations in their facial markings and that they behave more aggressively toward wasps with unfamiliar faces.

In 2008, Sheehan and Tibbetts published a paper in Current Biology demonstrating that these wasps have surprisingly long memories and base their behavior on what they remember of previous social interactions with other wasps.

In their latest study, Sheehan and Tibbetts tested learning by training wasps to discriminate between two different images mounted inside a T-maze, with one image displayed at each end of the top arm of the T. 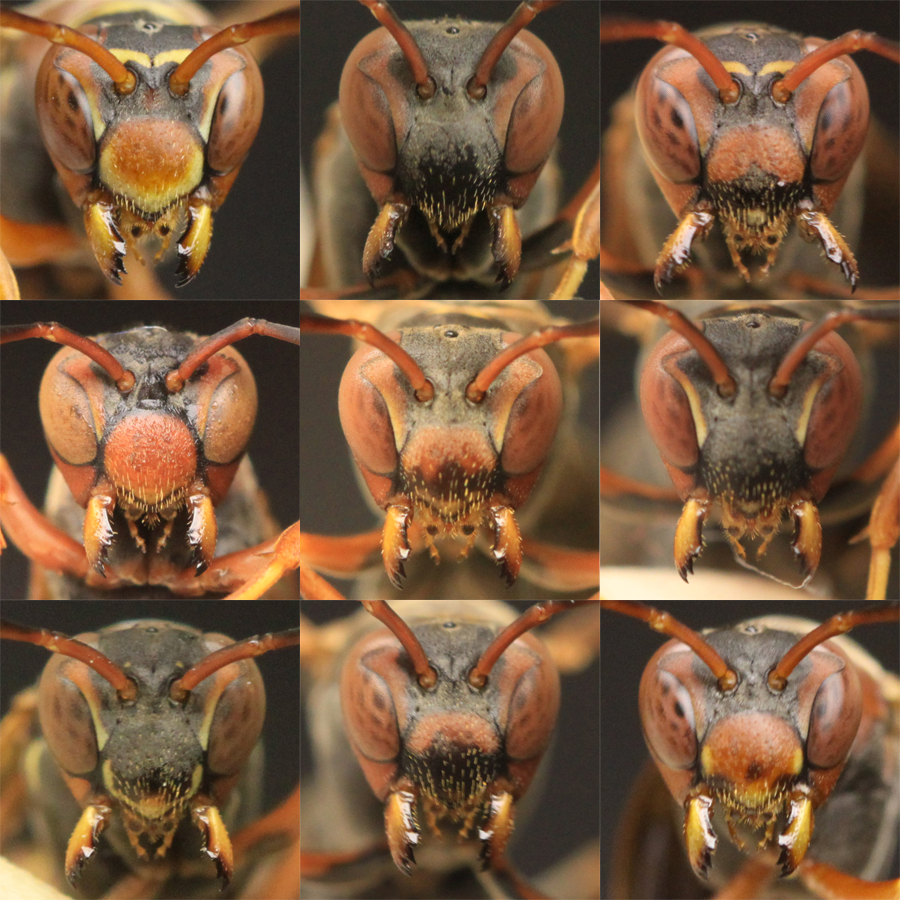 Polistes fuscatus paper wasps have extremely variable facial patterns that they use to recognize each other as individuals. This montage displays some of the variation seen in female paper wasp faces in this species. Credit: Michael SheehanTwelve wasps were trained for 40 consecutive trials on each image type. The paired images included photos of normal paper wasp faces, photos of caterpillars, simple geometric patterns, and computer-altered wasp faces. A reward was consistently associated with one image in a pair.

The researchers found that the paper wasps, which are generalist visual predators of caterpillars, were able to differentiate between two unaltered P. fuscatus faces faster and more accurately than a pair of caterpillar photos, two different geometric patterns, or a pair of computer-altered wasp faces. They learned to pick the correct unaltered wasp face about three-quarters of the time.

Two simple black-and-white geometric patterns should have been easy for the wasps to distinguish, because the insects’ compound eyes are good at detecting contrast and outlines, Sheehan said. Yet the wasps learned complicated face images more rapidly than the geometric patterns.

At the same time, introducing seemingly minor changes to a P. fuscatus facial image—by using a photo-editing program to remove a wasp’s antennae, for example—caused test subjects to perform much worse on the facial recognition test.

“This shows that the way they learn faces is different than the way they seem to be learning other patterns. They treat faces as a different kind of thing,” Sheehan said.

“Humans have a specialized face-learning ability, and it turns out that this wasp that lives on the side of your house evolved an analogous system on its own,” he said. “But it’s important to note that we’re not claiming the exact process by which wasps learn faces is the same as humans.”

The ability to recognize individuals is important to a species like P. fuscatus, in which multiple queens establish communal nests and raise offspring cooperatively, but also compete to form a linear dominance hierarchy. Remembering who they’ve already bested–and been bested by–keeps individuals from wasting energy on repeated aggressive encounters and presumably promotes colony stability by reducing friction.

Sheehan also tested a closely related species of wasp, P. metricus, which lacks the varied facial markings of the paper wasp and lives in colonies controlled by a single queen. In the T-maze test, P. metricus scored no better than chance when asked to distinguish between individuals of its own species.

“Differences in face learning between the two species cannot be attributed to general differences in visual learning, as both species learned to discriminate between pairs of artificial patterns and caterpillars at the same rate and with the same accuracy,” Sheehan and Tibbetts wrote. “P. fuscatus and P. metricus differed only in their ability to learn normal face stimuli.”

“The evolutionary flexibility of specialized face learning is striking and suggests that specialized cognition may be a widespread adaptation to facilitate complex behavioral tasks such as individual recognition,” they wrote.

Funding for the project was provided by the University of Michigan and an E.S. George Reserve Scholarship to Sheehan.