ANN ARBOR—What does a solar storm sound like? To get an idea, a University of Michigan researcher has created a “sonification” of measurements from two spacecraft during the most recent storm. Take a listen in this video.

The researcher who created it is Robert Alexander, a University of Michigan design science doctoral student. Alexander is a composer with a NASA fellowship to study how representing information as sound could aid in data mining. 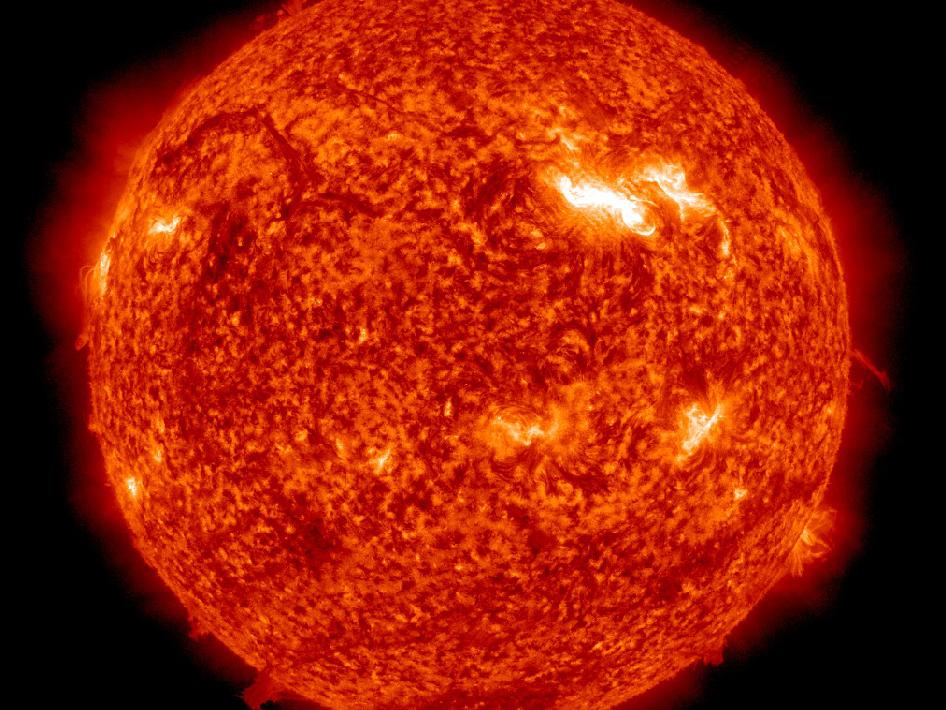 An active region on the sun, seen above as the bright spot to the right, has been moving across the face of the sun from left to right since March 2, 2012. Image credit: NASA/SDO/AIAFor this project he used data from U-M’s Fast Imaging Plasma Spectrometer instrument on NASA’s MESSENGER spacecraft at Mercury, as well as from NASA’s Solar and Heliospheric Observatory, which is about 1 million miles from the Earth.

To sonify the data, he began by writing 90 hours’ worth of raw information to an audio waveform. But in its original sampling rate of 44,100 hertz, it played back in less than a quarter of a second. That’s one of the benefits of sonifying data. You can zip through days’ worth of information in an instant. To make sense of it, in this case, he had to run it through additional algorithms and find the right playback speed.

“This approach is changing the timescale for us,” said Jim Raines, a lead mission operations engineer in U-M’s Space Physics Research Lab. “It’s really interesting to hear it.”

Sonification is the process of translating information into sound. It is used in Geiger counter radiation detectors, which emit clicks in the presence of high-energy particles. It’s not typically used to pick out patterns in information, but scientists on the U-M Solar and Heliospheric Research Group are exploring its potential in that realm. They’re looking to Alexander to make it possible.

“Robert is giving us another research tool,” Raines said. “We’re used to looking at wiggly-line plots and graphs, but humans are very good at hearing things. We wonder if there’s a way to find things in the data that are difficult to see.”

Alexander has been developing this technique for several years. Late last year, his approach led to a new discovery. It turns out that a particular ratio of carbon atoms that scientists had not previously keyed in to can reveal more about the source of the solar wind than the ratios of elements they currently rely on. The solar wind is a squall of hot plasma, or charged particles, continuously emanating from the sun.

With this technique, Alexander hopes to build a bridge between science and art.

“For a while, movies were silent and people just accepted that that’s the way it is,” he said. “There’s all this high res footage of what’s happening on the surface of the sun, and it’s silent. I’m creating a soundtrack.”