Listening to survivors of sexual assault 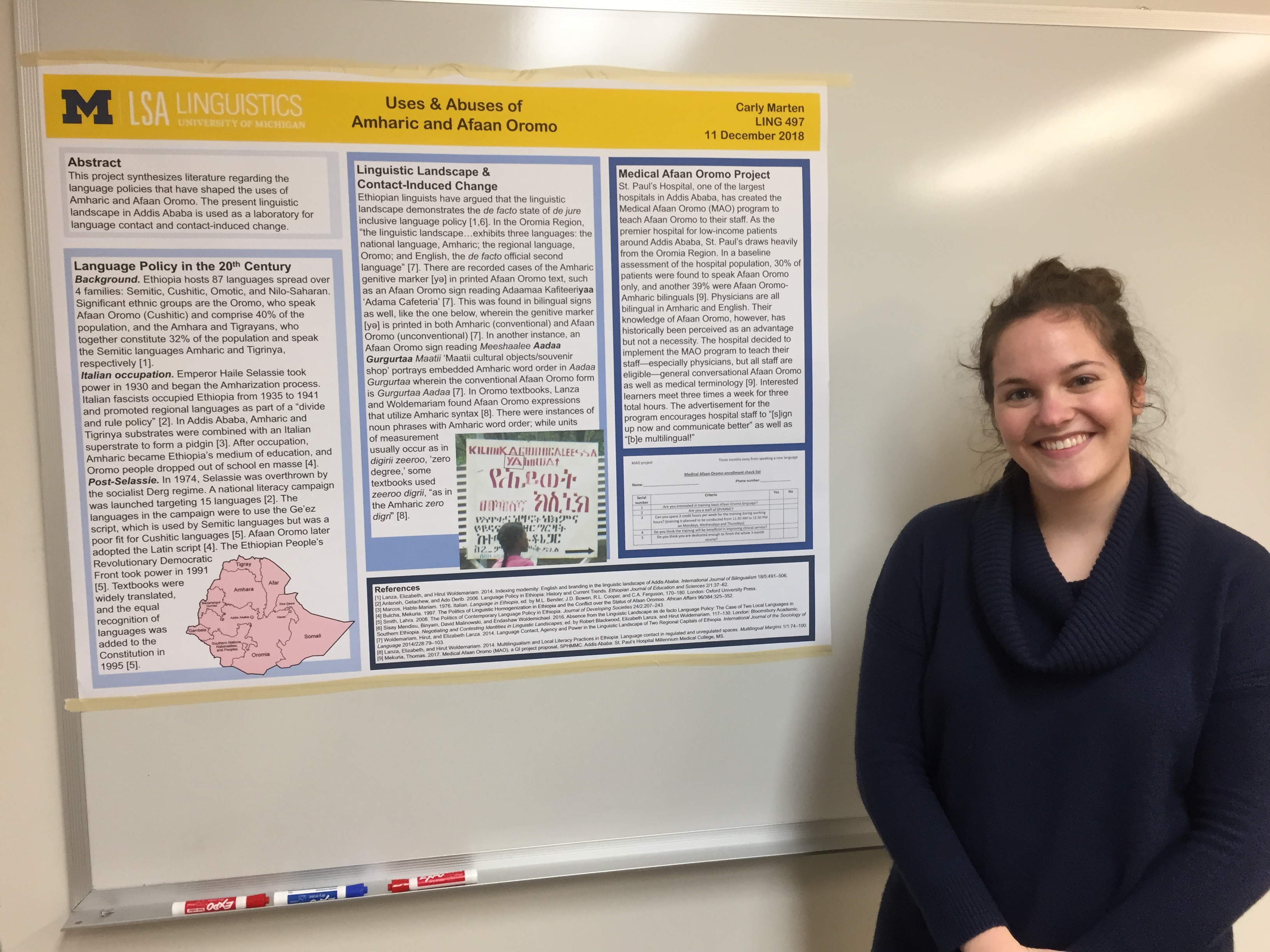 Carly Marten with her undergraduate thesis.

ANN ARBOR—Carly Marten was in Addis Ababa, the capital city of Ethiopia, for a summer project last year when she decided to attend a feminist film festival.

She hired a cab for the drive and back but soon realized that the conduct of the driver was questionable. She reached the festival venue safely but was concerned about how she was going to get back home.

Marten said one of the event’s organizers sat down with her and showed her how to navigate the public transit system and also recommended safer taxi lines.

“I was touched by this interaction, where we forged camaraderie over a shared fear—safety,” Marten said. “I saw the same generosity from many people time and time again during my stay.”

The experience helped deepen Marten’s belief in helping others and eventually inspired her plans as the next recipient of the Wallenberg Fellowship. The award is given each spring to a graduating senior with exceptional accomplishment for service to the public good.

The fellowship will provide Marten $25,000 to carry out an independent project of learning or exploration anywhere in the world during the year after her graduation. She plans to go to back to Ethiopia to work with groups in Addis Ababa, to learn more about the lives of sexual violence survivors and how they negotiate the medical and legal pathways, confront barriers, recover their health and receive justice.

Marten will work with Thomas Mekuria, a faculty member and attending physician at St. Paul’s Hospital Millennium Medical College. He established a center at an affiliate site for sexual assault survivors who need help. Marten worked at the site in 2018 on a qualitative case study on health literacy among circumcised women.

Marten will graduate from U-M this week with majors in gender and health, and linguistics. Her fellowship project will be interdisciplinary and bring different approaches from her fields of study. She will work with the sexual assault survivors who come to the center in Addis Ababa to get medical help and seek justice, and will also study the language they use to construct a narrative of their experiences.

According to the Ethiopia Demographic and Health Survey, 10% of women report sexual violence. The perpetrators are often current or former husbands and other family members. Experts feel that this number is low as many women choose not to report the crime.

Marten says there is a significant dearth of research on the fallout of sexual violence and feels that her study will fill some of the holes as she talks with the survivors and follows their journey.

Savithry Namboodiripad, a Collegiate Fellow in the Department of Linguistics at the U-M College of Literature, Science, and Arts, who has mentored Marten in the last year, said Marten’s work on her project has been exceptional.

“I have been very impressed that she has been able to combine multiple approaches with the practicality of the situation to develop her project,” said Namboodiripad, who will be an assistant professor at U-M this fall.

Marten is also excited to be in Addis Ababa at a time when Ethiopia is quickly changing.

“They just elected their first woman president and opened their border with Eritrea after two decades,” she said. “It is a great time to be there.”

Marten, who wants to go to medical school and eventually work with Doctors Without Borders, hopes to present her findings to public officials and contribute to discussions of policy and social discourse.

The Wallenberg Fellowship honors one of U-M’s most illustrious graduates—Raoul Wallenberg, who graduated with a degree in architecture in 1935. As a Swedish diplomat during World War II, he saved the lives of tens of thousands of Jews in Hungary, using safe houses and creating special passports for them.

Marten said it feels great to be connected to Wallenberg and the fellows who have come before her.

“The spirit of Raoul Wallenberg challenges us to use our skills to create a more equitable world,” she said. “The opportunity to listen to survivors of sexual violence and serve them in my fullest capacity would be a tremendous honor.”