The movement of herders and livestock into the eastern steppe is of great interest to researchers, but few scholars have linked the introduction of herds and horses to the rise of complex societies.

Now, a new study in the journal PLOS ONE provides interdisciplinary support for connections between livestock dairying and the rise of social complexity in the eastern steppe. Using proteomic analysis of human dental calculus from sites in the Mongolian Altai, the researchers demonstrate a shift in dairy consumption over the course of the Bronze Age.

By tracking the consumption of dairy among populations in the Altai Mountains in Mongolia, researchers revealed the critical role of domesticated sheep, goats and cattle in ancient economies. The adoption of ruminant livestock eventually led to population growth, the establishment of community cemeteries and the construction of large monuments. While these pronounced changes occurred in tandem with the earliest evidence of horse dairying in Mongolia, the consumption of horse dairy remained a relatively novel practice until later periods.

Thus, the spread of herds into the Mongolian Altai resulted in immediate changes to human diets, with a delay in subsequent social and demographic transformations, said study lead author Alicia Ventresca Miller, assistant professor of anthropology at the University of Michigan.

“As we push back the dates of the introduction of livestock, we need to rethink the pace of social change, which may occur on much longer timescales,” she said.

Ventresca Miller and colleagues from U-M and the Max Planck Institute for the Science of Human History in Germany extracted proteins from calculus samples to identify caseins and whey associated with ruminant and horse dairy. Results were interpreted in consultation with researchers from the National University of Mongolia and National Museum of Mongolia, in an effort to clarify how ancient societies changed after the adoption of domesticated livestock. 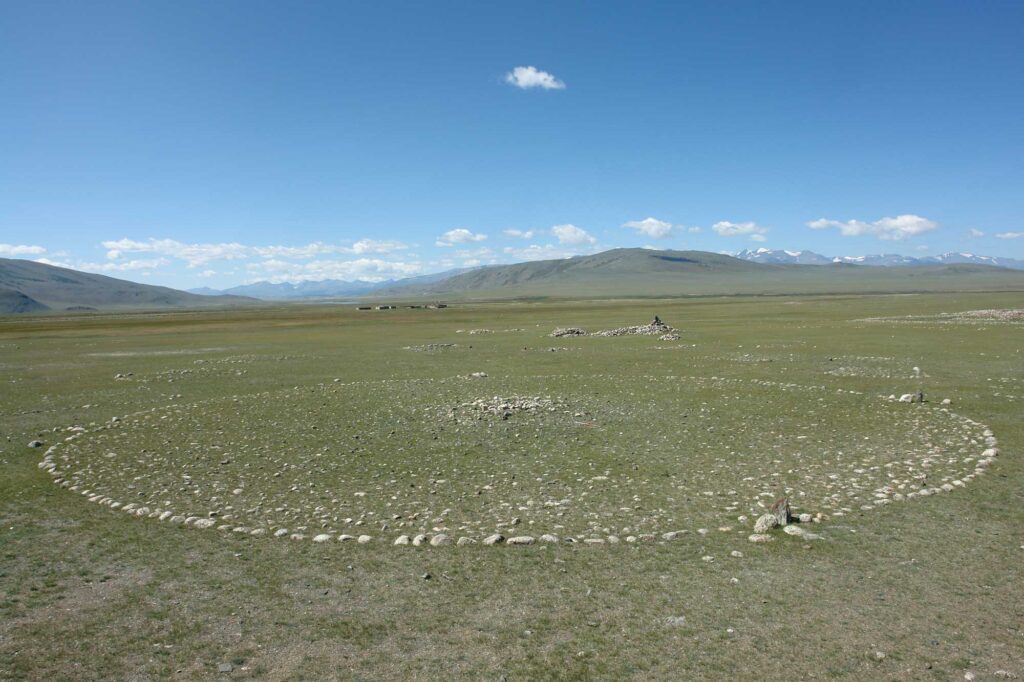 Sagsai burial from the site of Tsagaan Asga in the Altai Mountains of Mongolia. Image credit: Noost Bayarkhuu, University of Science and Technology of China

Dramatic social changes and monumental constructions were fueled by a long-term dependence on sheep, goats and cattle, Ventresca Miller says. This is supported by finds of mostly ruminant bones in large monumental Khirgisuurs in the Altai Mountains, while in other areas of Mongolia horse bone deposits have been identified along with ruminants.

“These new results might allow for a shift in our understanding of Bronze Age dynamics,” said Tsagaan Turbat, professor of archaeology and anthropology at the National University of Mongolia.

Turbat believes that Deer Stone-Khirgisuur complexes, the most studied in the region, may have originated from Sagsai groups in the Altai Mountains.

The current study pushes back the earliest date of horse dairying in the eastern steppe associated with Sagsai burials to about 1350 B.C. As initial evidence of horse milk consumption is rare, this may have been a novelty since horses were an important feature of ritual life, the researchers say.