Livestream confirmed for performance of rare music manuscript from Auschwitz 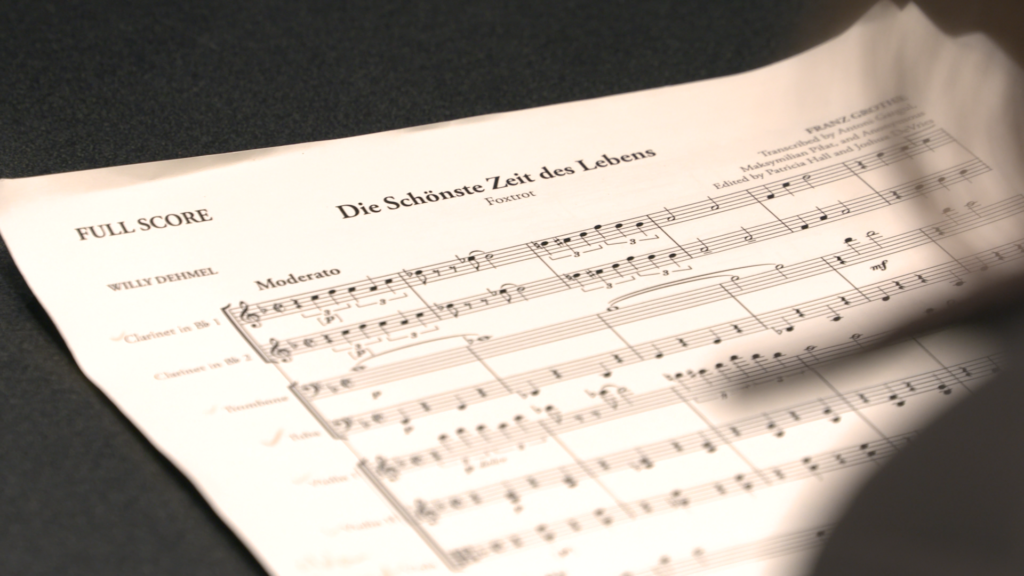 ANN ARBOR—University of Michigan students will give the first public performance of a foxtrot that was arranged and performed by prisoners in the Auschwitz I men’s orchestra during WWII.

The concert is the result of research by music theory professor Patricia Hall, who recently researched a music manuscript at the Auschwitz-Birkenau State Museum.

Ironically titled “The Most Beautiful Time of Life” (Die Schönste Zeit des Lebens), the piece is a light foxtrot based on a song by Franz Grothe, a popular German film composer.

Over the last year, Hall has worked with music theory graduate student Joshua DeVries to transcribe the handwritten manuscript so that it could be performed by the U-M Contemporary Directions Ensemble, led by professor Oriol Sans.

According to Hall, it is likely the first time since 1943 that audiences will be able to hear the music, as very few manuscript parts from works arranged and performed at Auschwitz have survived.

The U-M Contemporary Directions Ensemble, which completed a recording of the song last month at U-M’s Duderstadt Center, will perform the work live at a free concert at 8 p.m. Friday, Nov. 30, in Hankinson Hall at the E.V. Moore Building, 1100 Baits Drive, on U-M’s North Campus.

Hall will offer remarks before the performance.

In response to an overwhelming interest in the performance, a livestream of the performance will start promptly at 8 p.m. EST at this link: myumi.ch/LPw4o

The performance will be available to view after the livestream on the U-M School of Music, Theatre & Dance YouTube channel: myumi.ch/LBg41