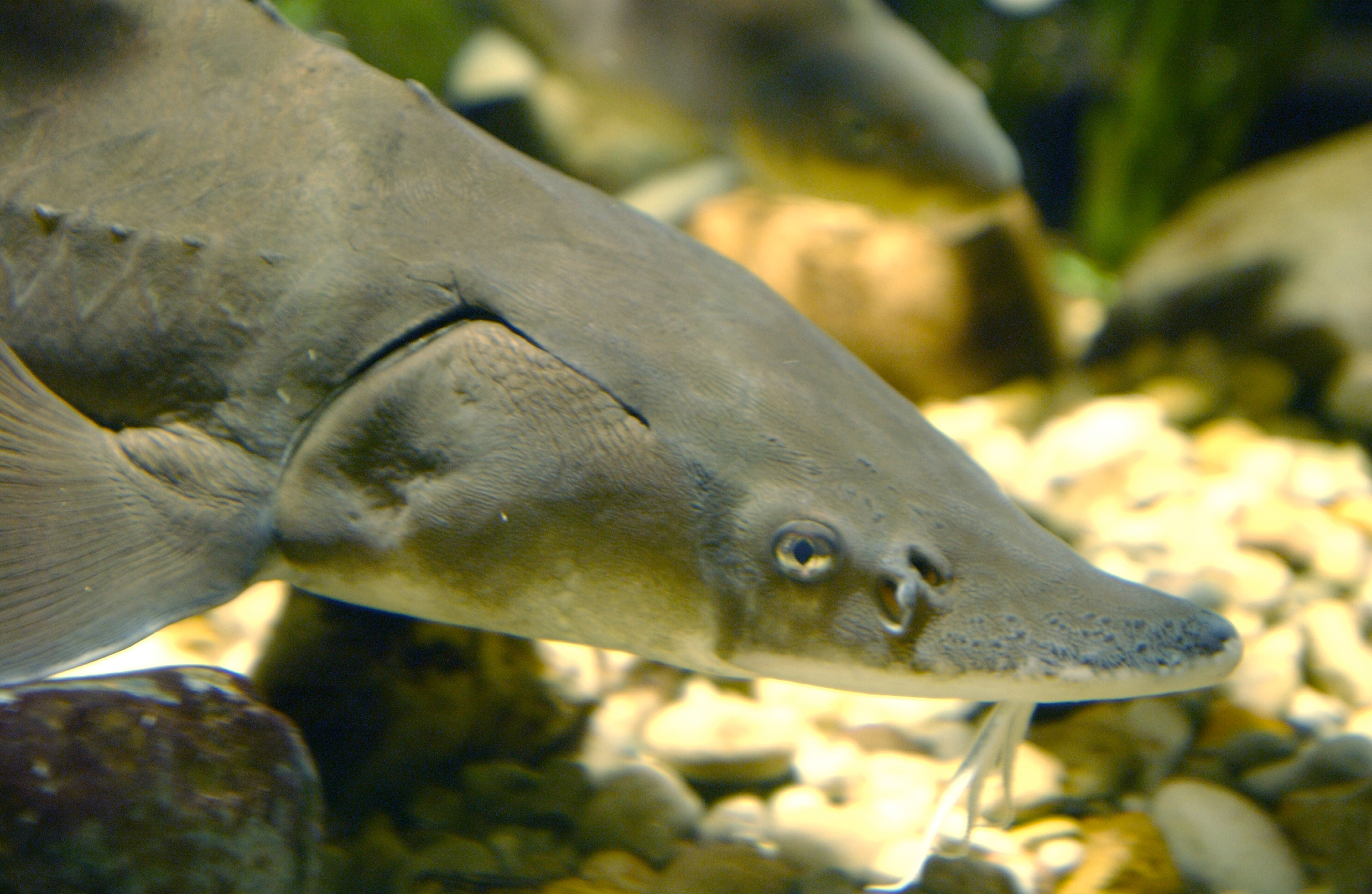 A lake sturgeon from the Great Lakes. Photo courtesy of Michigan Sea Grant.ANN ARBOR—Efforts to restore sturgeon in the Great Lakes region have received a lot of attention in recent years, and many of the news stories note that the prehistoric-looking fish are “living fossils” virtually unchanged for millions of years.

But a new study by University of Michigan researchers and their colleagues reveals that in at least one measure of evolutionary change—changes in body size over time—sturgeon have been one of the fastest-evolving fish on the planet.

“Sturgeon are thought of as a living fossil group that has undergone relatively slow rates of anatomical change over time. But that’s simply not true,” said Daniel Rabosky, assistant professor in the U-M Department of Ecology and Evolutionary Biology and a curator of herpetology at the Museum of Zoology.

A spotted gar from the Great Lakes. Photo courtesy of Michigan Sea Grant.“Our study shows that sturgeon are evolving very quickly in some ways. They have evolved a huge range of body sizes. There are dwarf sturgeon the size of a bass and several other species that are nearly as big as a Volkswagen.”

The sturgeon finding is just one result in a wide-ranging study of the rates of species formation and anatomical change in fish. The work involved assembling one of the largest evolutionary trees ever created for any group of animals. The evolutionary relationships between nearly 8,000 species of fish are delineated in the branches of the tree, allowing the researchers to make inferences about all 30,000 or so species of ray-finned fish.

A lake trout from the Great Lakes. Photo courtesy of Michigan Sea Grant.The study’s findings were published online June 6 in Nature Communications. Rabosky and Michael Alfaro of the University of California, Los Angeles, are the lead authors. U-M computational evolutionary biologist Stephen Smith is a co-author.

The main goal of the project was to test a longstanding idea in evolutionary biology that has anecdotal support but which had never been rigorously evaluated, Rabosky said. It was Charles Darwin who coined the term “living fossil” to describe extant creatures, such as the gar (another Great Lakes resident) and the lungfish, which have been present for many millions of years in the fossil record yet appear to have undergone very little anatomical change.

Paleontologists have long suspected that these observations reflect a fundamental coupling between the rates of species formation and anatomical change: groups of organisms that contain lots of species also seem to have greater amounts of anatomical variation, while groups with only a few species, such as the gar, lack much morphological variety. 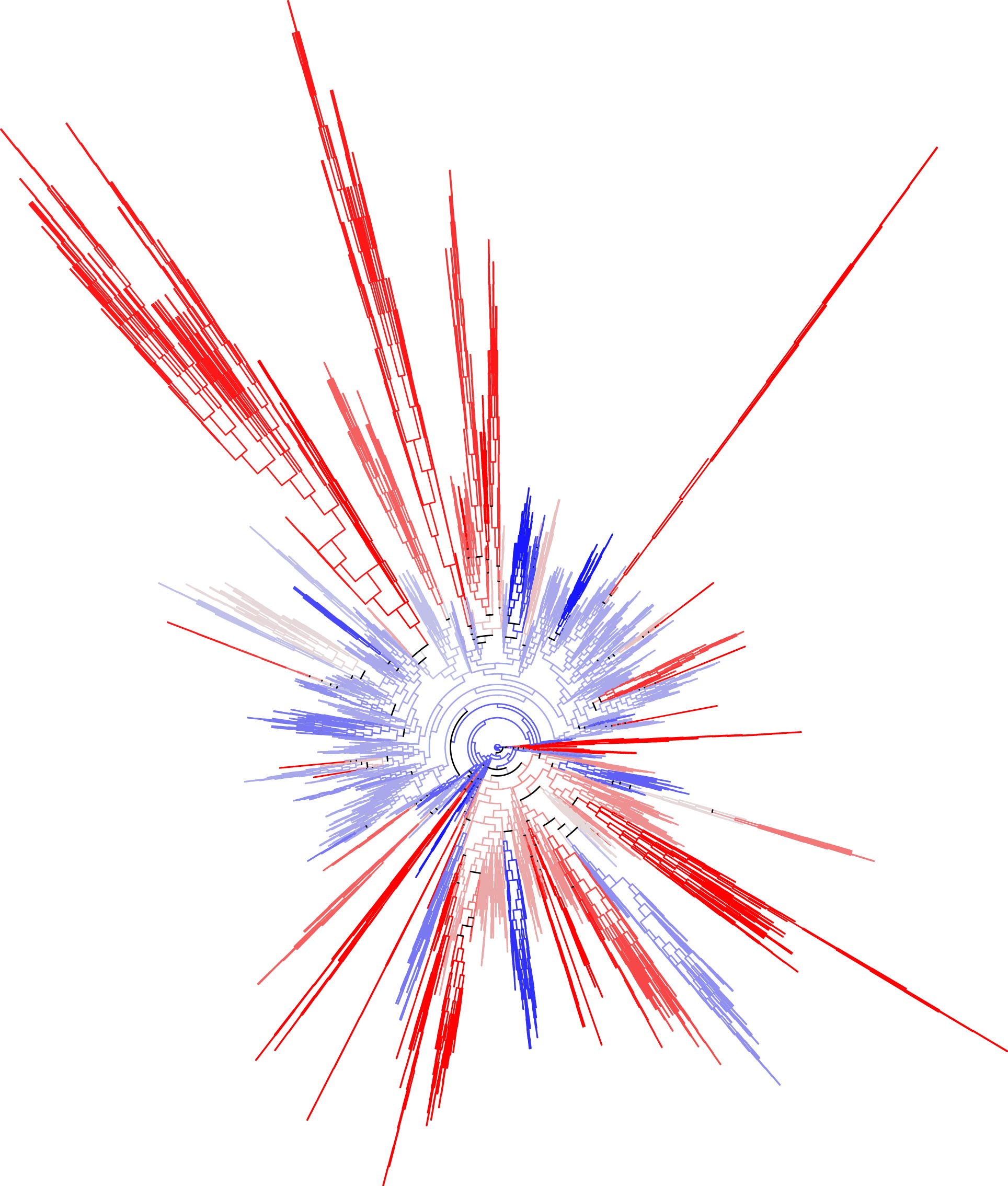 This evolutionary tree shows the relationships between nearly 8,000 living species of fish. Red branches denote groups with fast rates of body size change, blue branches indicate slow body size change, and the length of each branch reflects the speed at which groups split into new species. Illustration courtesy of Dan Rabosky.Rabosky and his colleagues assembled a time-calibrated evolutionary tree for 7,864 living fish species using DNA sequence data and body-size information from publicly available databases. Their data set was so large that they had to develop new computer programs from scratch to analyze it.

The new computer models and the vast amount of data enabled the team to study the correlation between how quickly new species form and how rapidly they evolve new body sizes on a scale that had not previously been possible.

They found a strong correlation between the rates of species diversification and body size evolution across the more than 30,000 living species of ray-finned fish, which comprise the majority of vertebrate biological diversity.

“We’re basically validating a lot of ideas that have been out there since Darwin, but which had never been tested at this scale due to lack of data and the limits of existing technologies,” Rabosky said.

Most of the fish groups fall into one of two categories. Fish like the gar form species very slowly and show little range in body size. Others, like the salmon family—which includes salmon, trout, whitefish and char—do both: they form species quickly and have a wide range of body sizes.

Sturgeon have been around more than 100 million years and today consist of 29 species worldwide, including the lake sturgeon found in the Great Lakes. They don’t fit the general pattern found by Rabosky’s team; there are few sturgeon species but a great variety in body size.

“In that sense, they’re kind of an outlier,” Rabosky said.

In addition to Rabosky, Alfaro and Smith, authors of the Nature Communications paper are Francesco Santini of the Universita di Torino in Italy, Jonathan Eastman of the University of Idaho, Brian Sidlauskas of Oregon State University and Jonathan Chang of UCLA.

The research was supported by the National Science Foundation and the Miller Institute for Basic Research at the University of California, Berkeley.