Livingston Awards finalists move to final round of judging 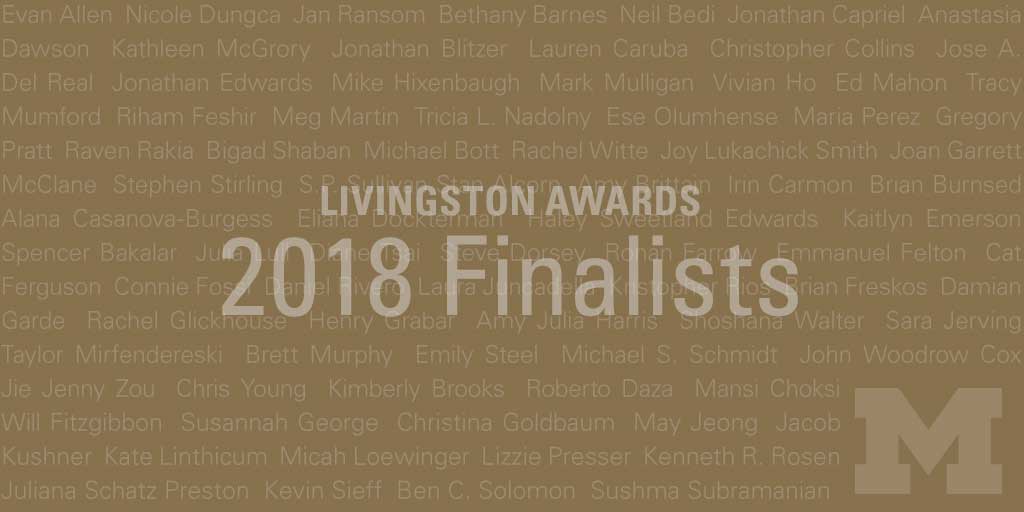 ANN ARBOR—The Livingston Awards for Young Journalists and the University of Michigan announced today the 2018 finalists in local, national and international reporting.

The finalists, selected from more than 500 entries, will move to the final round of judging. The awards honor the best reporting and storytelling by journalists under the age of 35 across all forms of journalism.

The national judges will introduce the winners June 6, 2018, at a New York City luncheon.

Funded by the John S. and James L. Knight Foundation and U-M to support the vital role of a free and independent press, the awards bolster the work of young reporters, create the next generation of journalism leaders and advance civic engagement around powerful storytelling. Other sponsors include the Indian Trail Charitable Foundation, the Mollie Parnis Livingston Foundation, Christiane Amanpour, and Dr. Gil Omen and Martha Darling.

“The exceptional work of the Livingston Awards finalists demonstrates the singular power of journalism to document and interpret the issues and events shaping our times. It is a privilege to recognize such a broad range of talented reporters, committed to bringing depth, nuance and truth to our understanding of the world,” said Livingston Awards director Lynette Clemetson.

The Livingston Awards for Young Journalists are the most prestigious honor for professional journalists under the age of 35 and are the largest all-media, general reporting prizes in American journalism. Entries from print, broadcast and online journalism are judged against one another as technology blurs distinctions the traditional platforms. The $10,000 prizes are awarded annually for local, national and international reporting. The Livingston Awards are a program of Wallace House at the University of Michigan, home to the Knight-Wallace Fellowships for Journalists.