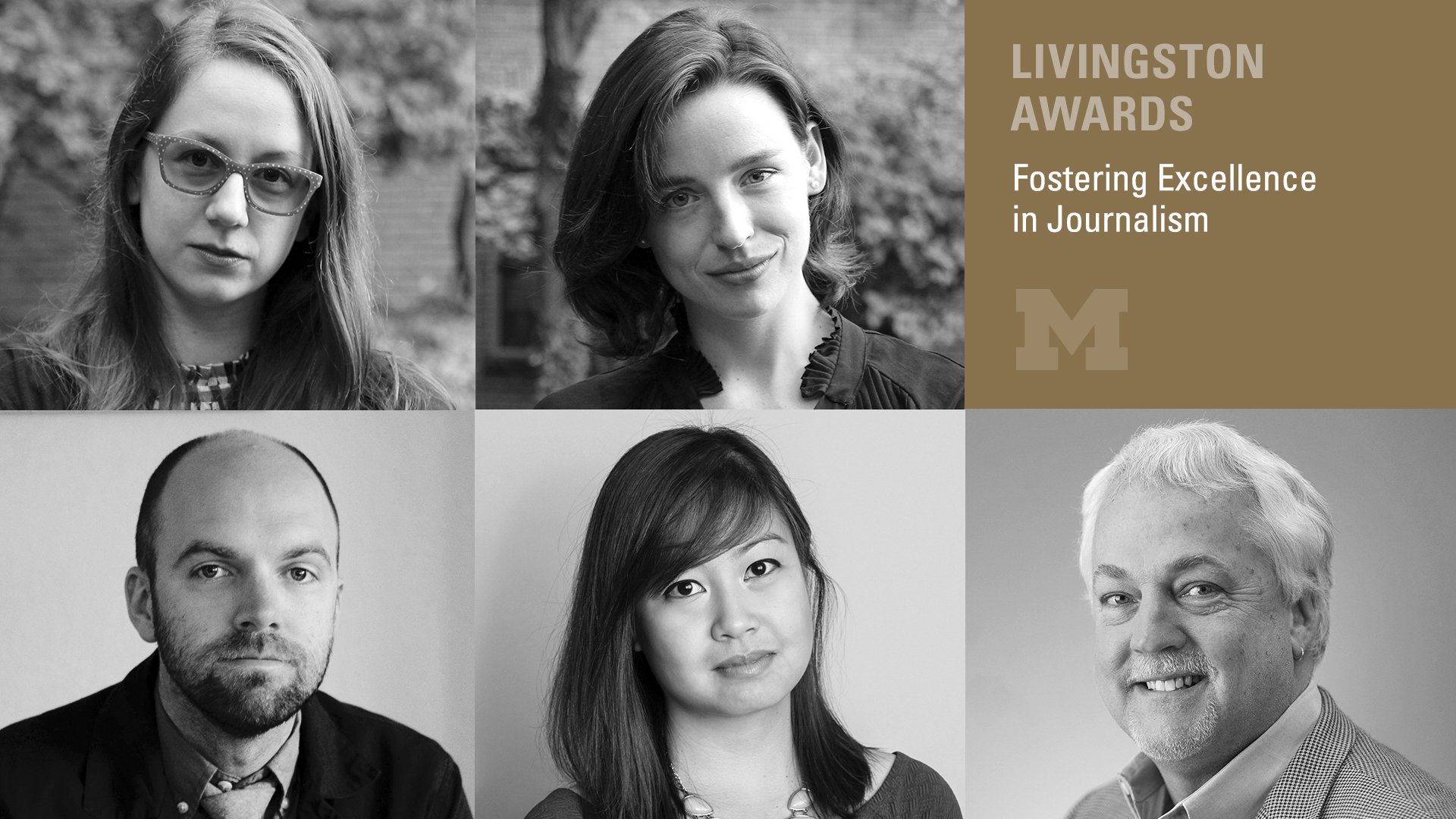 ANN ARBOR—Stories about the women who brought down U.S.A. Gymnastics doctor Larry Nassar, the murder of a gang leader at the highest security prison in the U.S., and Philippine President Rodrigo Duterte’s Facebook-fueled rise to power have won Livingston Awards.

The $10,000 prizes honor outstanding achievement in local, national and international reporting and recognize the best journalism by professionals under age 35 across of all platforms, including text, visual and audio storytelling.

The Livingston Awards also honored the late Rob Hiaasen of the Capital Gazette (Annapolis, Maryland) with the Richard M. Clurman Award for mentoring. The $5,000 prize is given each year to an experienced journalist who has played an active role in guiding and nurturing the careers of young reporters. The prize is named for the late Richard M. Clurman, former chief of correspondents for Time-Life News Service and architect of the Livingston Awards.

Funded by the John S. and James L. Knight Foundation and the University of Michigan to support the vital role of a free and independent press, the awards bolster the work of young reporters, create the next generation of journalism leaders and mentors, and advance civic engagement around powerful storytelling. Other sponsors include the Indian Trial Charitable Foundation, the Mollie Parnis Livingston Foundation, Christiane Amanpour, and Dr. Gil Omenn and Martha Darling.

Lindsey Smith and Kate Wells of Michigan Radio and NPR for the podcast series “Believed,” a haunting and multifaceted account of U.S.A. Gymnastics doctor Larry Nassar’s belated arrest and an intimate look at how an army of women—a detective, a prosecutor and survivors—brought down the serial sex offender.

“Big stories wind up told in broad strokes. Instead of amplifying their power, that sometimes makes them less accessible as human drama. Lindsey Smith and Kate Wells of Michigan Radio decided to go the other way, which is why their pieces on Larry Nassar grabbed me by the throat,” Quindlen said. “They illuminate, not the judicial process, but the people: the uber-mom who won’t back down from a fight, the father who never suspected and whose torment suffuses his voice, the investigators and, of course, the survivors. These reporters use the small details of a big story to give it a human scale.”

Chris Outcalt of The Atavist Magazine for “Murder at the Alcatraz of the Rockies,” a riveting narrative of a prison murder committed under the gaze of security cameras, a rookie FBI agent and the inner workings of the Mexican Mafia, a criminal prison organization spawned in California juvenile facilities in the 1950s.

“The best journalism doesn’t always cover the best-known stories. Chris Outcalt’s extraordinary reporting introduces readers to sides of American life few people will ever see: life within the country’s most secure prison, an infamous gang’s rules of violence and honor, and the decade-long investigation and trial of a killing that is nothing like the open-and-shut case it first appears to be,” Stephens said. “Outcalt’s writing grips the reader’s attention from the first sentence to the last and doesn’t waste a word. It reminds us at every turn of the humanity of our most dangerous felons, the complexity of their motives, and the difficulty of ascertaining truth and doing justice.”

“Davey Alba’s reporting brings home the immense power of digital platforms. We see how Facebook created the ultimate walled garden in the Philippines by subsidizing the internet, thus making Facebook synonymous not just with getting online but as the primary source of news,” Auletta said. “By relying on algorithms rather than humans to police news and content, Facebook ignored how fake news went viral and was used by a corrupt government to punish opponents, sometimes with death. Rather than hire editors to police false news, Facebook engineers hubristically believed their algorithms would do the job, thus saving money. This is what they’ve done around the world, with sometimes bloody consequences.”

The late Rob Hiaasen was honored with the Richard M. Clurman Award for his newsroom commitment to counseling, nurturing and inspiring young journalists. Hiaasen was the assistant editor and columnist at the Capital Gazette in Annapolis, Maryland, and a lecturer at the University of Maryland Philip Merrill College of Journalism. On June 28, 2018, he was killed in a mass shooting at the Capital Gazette offices, along with Gerald Fischman, John McNamara, Rebecca Smith and Wendi Winters, in the deadliest attack on journalists in the United States on record.