ANN ARBOR—An outdoor fly lab for testing autonomous aerial vehicles is open for use at the University of Michigan College of Engineering.

“I believe M-Air will rapidly become an incubator for new aerial vehicle concepts,” Atkins said. “With this facility, we can pursue aggressive educational and research flight projects that involve high risk of fly-away or loss-of-control—and in realistic wind, lighting and sensor conditions. We also can begin to better understand operational risks associated with real-world outdoor flights with no real risk to people or other aircraft outside the net.”

Drones of today and tomorrow

Autonomous aerial vehicles have a host of applications beyond delivering packages. Large ones can be used for commercial transport and national security, researchers say. Smaller drones could scout disaster sites, inspect infrastructure like bridges and wind turbines, and perform other jobs that are dangerous for humans. They could also gather environmental and atmospheric data.

Dimitrios Zekkos, associate professor of civil and environmental engineering at U-M, works on a team that’s using specialized drones to survey and 3D-map areas stricken by hurricanes, earthquakes and landslides. On Wednesday at M-Air, the team demonstrated how to use a drone to drop a 15-pound weight and, with sensors, record the shockwave on the ground, giving them valuable insights about what’s happening below the soil.

“Much of what we see at the surface—whether it is a failure of a bridge, a landslide, or a structural collapse—may be caused by failure at depth. The problem is that some of these areas, immediately after the event, are unsafe and sometimes impossible to reach,” said Zekkos, who in 2016 surveyed Nepal after a major earthquake. “This work can inform risk assessment studies, urban planning and other critical decisions and processes. It could also lead to better design procedures and, eventually, safer structures.”

Atkins says we may be seeing drones working closer to the ground as well.

“The next big thing for the small drone—and for M-Air—is to put them to work on outdoor physical tasks as a complement to to surveillance, science data collection and delivery missions we have already begun to achieve,” she said. “I want unmanned aerial vehicles to clean my gutters, inspect my roof for damage and clean my windows each spring. They could also tape off my windows and paint my house someday, given proper paint spraying equipment.”

She is in the early stages of developing roofing robots that can ferry shingles, and eventually position and install them with a pneumatic nailer. M-Air will also help her test algorithms for control of larger autonomous aerial vehicles with scale models in free-flight.

“Flying robots will allow us to carry payloads and sensors to locations that ground robots simply cannot access. At U-M, we’re routinely taking our robots under the seas, walking over difficult terrain or navigating collapsed buildings, and now we’re proud to add M-Air to the list of environments where we can put our robots to test,” said Jessy Grizzle, director of robotics at U-M and the Elmer G. Gilbert Distinguished University Professor of Engineering and the Jerry W. and Carol L. Levin Professor of Engineering in the Department of Electrical Engineering and Computer Science. 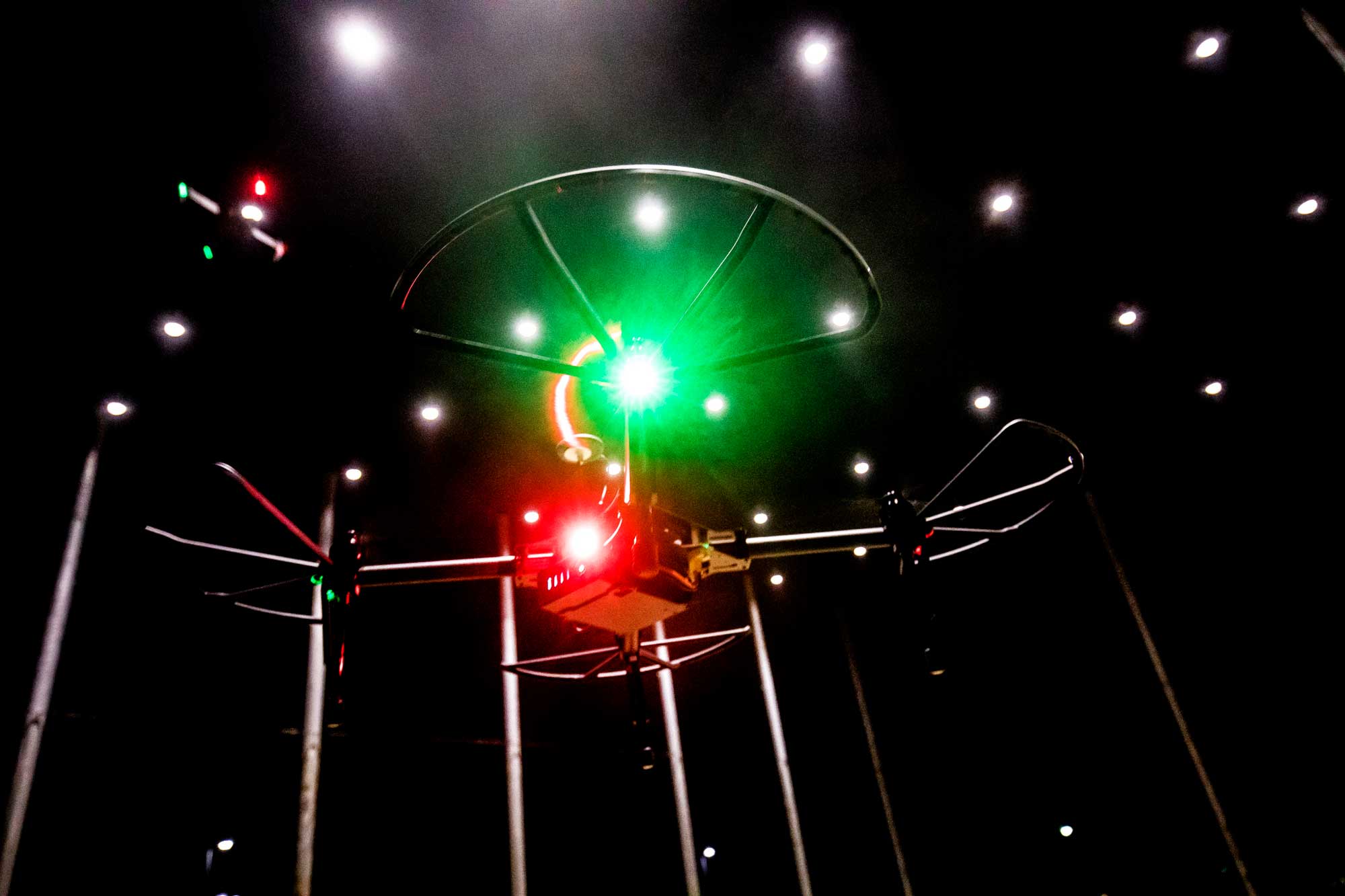 Drones are flown the first flight of M-Air, an advanced robotics testing facility for air, sea, and land, on North Campus of the University of Michigan in Ann Arbor, MI on February 20, 2018. The facility is a netted, 9,600 gross square ft., four-story complex situated next to the site where the Ford Motor Company Robotics Building will open in late 2019. Image credit: Joseph Xu, Michigan Engineering

“Students and faculty from across the university are actively engaged in developing creative designs, novel capabilities and innovative applications for autonomous aerial vehicles,” said S. Jack Hu, U-M vice president for research. “This facility will allow them to test their innovations in a safe, controlled environment.”

Flights at M-Air are considered indoors. They don’t need to go through U-M’s typical outdoor drone flight approval process, which is due to safety concerns about interference with hospital helicopters and other aircraft.

“Michigan Engineering is now the only engineering school or college in the country—perhaps in the world—with access to cutting-edge robotics test facilities for land, air, sea and space,” said Alec D. Gallimore, who is the Robert J. Vlasic Dean of Engineering, the Richard F. and Eleanor A. Towner Professor of Engineering, an Arthur F. Thurnau Professor, and a professor both of aerospace engineering and of applied physics.

“This is a key piece in our long-term plan to give our faculty and students best-in-class resources as they work to solve society’s greatest challenges and harness exciting opportunities.”

M-Air is down the road from U-M’s one-of-a-kind Mcity Test Facility, a simulated urban and suburban environment where academic and industry researchers test autonomous and connected vehicles. The college is home to the Marine Hydrodynamics Lab, which houses a 360-foot-long indoor body of water for testing robotic and conventional watercraft. And its Space Physics Research lab develops and tests robotic spacecraft for deployment across the solar system.

The facility is funded by Michigan Engineering and the U-M Office of Research.