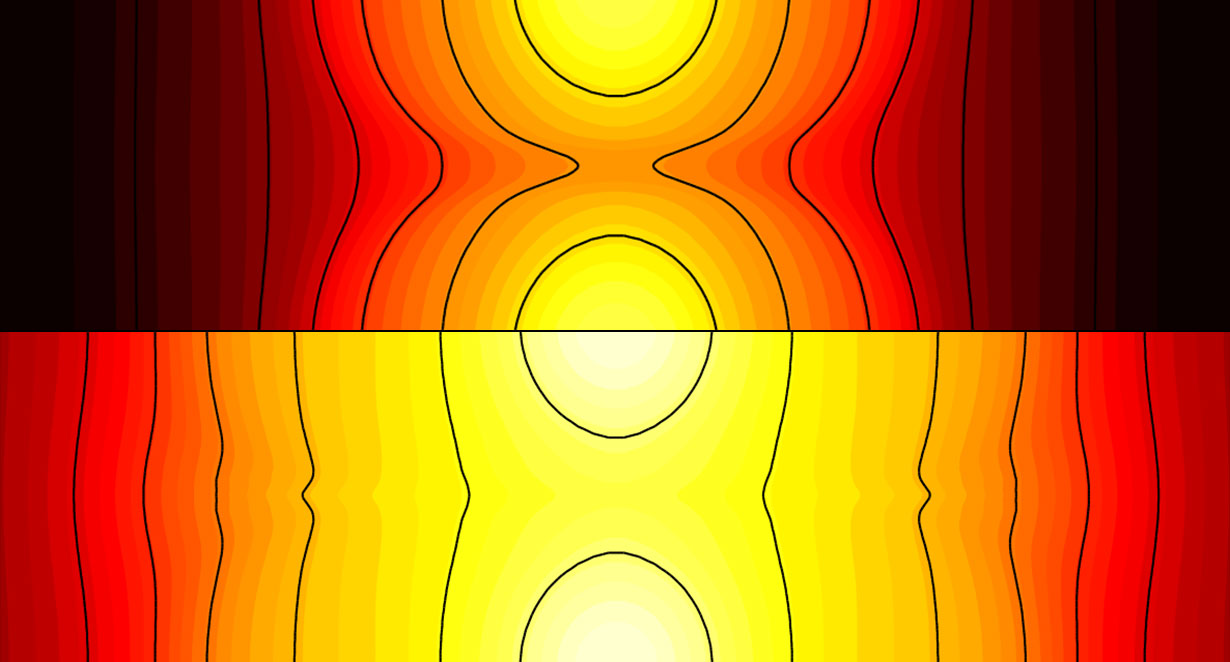 The top of this image shows how early in the heating, magnetic fields, drawn as black lines, prevent heat from flowing easily between the two yellow laser spots. Later in the heating, as depicted on the bottom half, the moving magnetic fields continually connect and provide a channel for heat to flow between the two laser spots. This newly discovered magnetic behavior could advance nuclear fusion. Image credit: Joglekar, Thomas, Fox and BhattacharjeeANN ARBOR—Inspired by the space physics behind solar flares and the aurora, a team of researchers from the University of Michigan and Princeton has uncovered a new kind of magnetic behavior that could help make nuclear fusion reactions easier to start.

Fusion is widely considered the ultimate goal of nuclear energy. While fission leaves behind radioactive waste that must be stored safely, fusion generates helium, a harmless element that is becoming scarce. Just 250 kilograms of fusion fuel can match the energy production of 2.7 million tons of coal.

Unfortunately, it is very difficult to get a fusion reaction going.

“We have to compress the fuel to a temperature and density similar to the core of a star,” said Alexander Thomas, assistant professor of nuclear engineering and radiological sciences.

Once those conditions are reached, the hydrogen fuel begins to fuse into helium. This is how young stars burn, compressed by their own gravity.

On Earth, it takes so much power to push the fuel atoms together that researchers end up putting in more energy than they get out. But by understanding a newly discovered magnetic phenomenon, the team suggests that the ignition of nuclear fusion could be made more efficient.

Two methods dominate for confining the fuel, made of hydrogen atoms with extra neutrons, so that fusion can begin. Magnetic confinement fusion uses magnetic fields to trap the fuel in a magnetic ‘bottle,’ and inertial confinement fusion heats the surface of the fuel pellet until it blows off in a way that causes the remaining pellet to implode. The team explored an aspect of the latter method through computer simulations.

“One of the concerns with nuclear fusion is to squeeze this very spherical fuel pellet perfectly into a very small spherical pellet,” said Archis Joglekar, a doctoral student in nuclear engineering and radiological sciences.

To avoid pushing the ball of fuel into an irregular shape that won’t ignite, the fuel must be exposed to uniform heat that will cause its surface layer to evaporate all at once. As this layer pushes off at high speed, it applies equal pressure to all sides of the pellet and causes it to shrink to one thousandth of its original volume. When that happens, the fuel begins to fuse.

The heat comes from about 200 laser beams hitting the inside of a hollow metal cylinder with the fuel pellet sitting at its heart. The trouble is that the light energy from the laser is converted to heat in the metal by way of electrons, and the electrons can get trapped in magnetic fields created by the laser spots.

When the laser light hits the metal, it turns some of the surface metal into plasma, or a soup of electrons and free atomic nuclei. The laser and the heat drive the electrons to move in a way that sets up a magnetic field circling the laser spot.

The magnetic field acts as a boundary for the electrons—they can’t cross it. But until now, researchers didn’t know that the hot electrons, in an effort to get to cooler areas, are able to push the magnetic fence outward.

The team showed that the flow of hot electrons could drive the magnetic fields around neighboring laser spots together, causing them to join up. Instead of forming a barrier between the laser spots, the joined fields open a channel between them.

“Now there’s a clear path for the electrons to move into what would otherwise be the cold region,” Joglekar said.

Designers of inertial fusion ignition systems may be able to use this newly discovered feature to place the laser spots so that they heat the cylinder more quickly and efficiently.

“Essentially, what we found is a completely new magnetic reconnection mechanism,” Thomas said. “Though we’re studying it in an inertial confinement fusion process, it might be relevant to the surface of the sun and magnetic confinement fusion.”

For instance, knowing that the flow of hot, charged particles on the sun can push magnetic fields around could inspire new theories about how solar flares occur.

A paper on this work, titled “Magnetic reconnection in plasma under inertial confinement fusion conditions driven by heat flux effects in Ohm’s law,” is published in Physical Review Letters. It was carried out in collaboration with Amativa Bhattacharjee and William Fox of the Princeton Plasma Physics Laboratory.