Modern snakes evolved from ancestors that lived side by side with the dinosaurs and that likely fed mainly on insects and lizards.

Then a miles-wide asteroid wiped out nearly all the dinosaurs and roughly three-quarters of the planet’s plant and animal species 66 million years ago, setting the stage for the spectacular diversification of mammals and birds that followed in the early Cenozoic Era.

A new University of Michigan study shows that early snakes capitalized on that ecological opportunity and the smorgasbord that it presented, rapidly and repeatedly evolving novel dietary adaptations and prey preferences.

The study, which combines genetic evidence with ecological information extracted from preserved museum specimens, was published online Oct. 14 in the journal PLOS Biology.

“We found a major burst of snake dietary diversification after the dinosaur extinction—species were evolving quickly and rapidly acquiring the ability to eat new types of prey,” said study lead author Michael Grundler, who did the work for his doctoral dissertation at U-M and who is now a postdoctoral researcher at UCLA.

Mammals and birds, which were also diversifying in the wake of the extinction, began to appear in snake diets at that time. Specialized diets also emerged, such as snakes that feed only on slugs or snails, or snakes that eat only lizard eggs.

Similar outbursts of dietary diversification were also seen when snakes arrived in new places, as when they colonized the New World.

“What this suggests is that snakes are taking advantage of opportunities in ecosystems,” said U-M evolutionary biologist and study co-author Daniel Rabosky, who was Grundler’s doctoral adviser. “Sometimes those opportunities are created by extinctions and sometimes they are caused by an ancient snake dispersing to a new land mass.”

Those repeated transformational shifts in dietary ecology were important drivers of what evolutionary biologists call adaptive radiation, the development of a variety of new forms adapted for different habitats and ways of life, according to Grundler and Rabosky.

Modern snakes are impressively diverse, with more than 3,700 species worldwide. And they display a stunning variety of diets, from tiny leaf-litter snakes that feed only on invertebrates such as ants and earthworms to giant constrictors like boas and pythons that eat mammals as big as antelope.

So, how did legless reptiles that can’t chew come to be such important predators on land and sea? To find out, Grundler and Rabosky first assembled a dataset on the diets of 882 modern-day snake species.

The dataset includes more than 34,000 direct observations of snake diets, from published accounts of scientists’ encounters with snakes in the field and from the analysis of the stomach contents of preserved museum specimens. Many of those specimens came from the U-M Museum of Zoology, home to the world’s second-largest collection of reptiles and amphibians.

All species living today are descended from other species that lived in the past. But because snake fossils are rare, direct observation of the ancient ancestors of modern snakes—and the evolutionary relationships among them—is mostly hidden from view.

However, those relationships are preserved in the DNA of living snakes. Biologists can extract that genetic information and use it to construct family trees, which biologists call phylogenies.

Grundler and Rabosky merged their dietary dataset with previously published snake phylogenetic data in a new mathematical model that allowed them to infer what long-extinct snake species were like.

“You might think it would be impossible to know things about species that lived long ago and for which we have no fossil information,” said Rabosky, an associate professor in the U-M Department of Ecology and Evolutionary Biology and an associate curator at the Museum of Zoology.

“But provided that we have information about evolutionary relationships and data about species that are now living, we can use these sophisticated models to estimate what their long-ago ancestors were like.”

In addition to showing a major burst of snake dietary diversification following the demise of the dinosaurs in what’s known as the K-Pg mass extinction, the new study revealed similar explosive dietary shifts when groups of snakes colonized new locations.

For example, some of the fastest rates of dietary change—including an increase of roughly 200% for one subfamily—occurred when the Colubroidea superfamily of snakes made it to the New World.

The colubroids account for most of the world’s current snake diversity, with representatives found on every continent except Antarctica. They include all venomous snakes and most other familiar snakes; the group does not include boas, pythons and several obscure snakes such as blind snakes and pipe snakes. 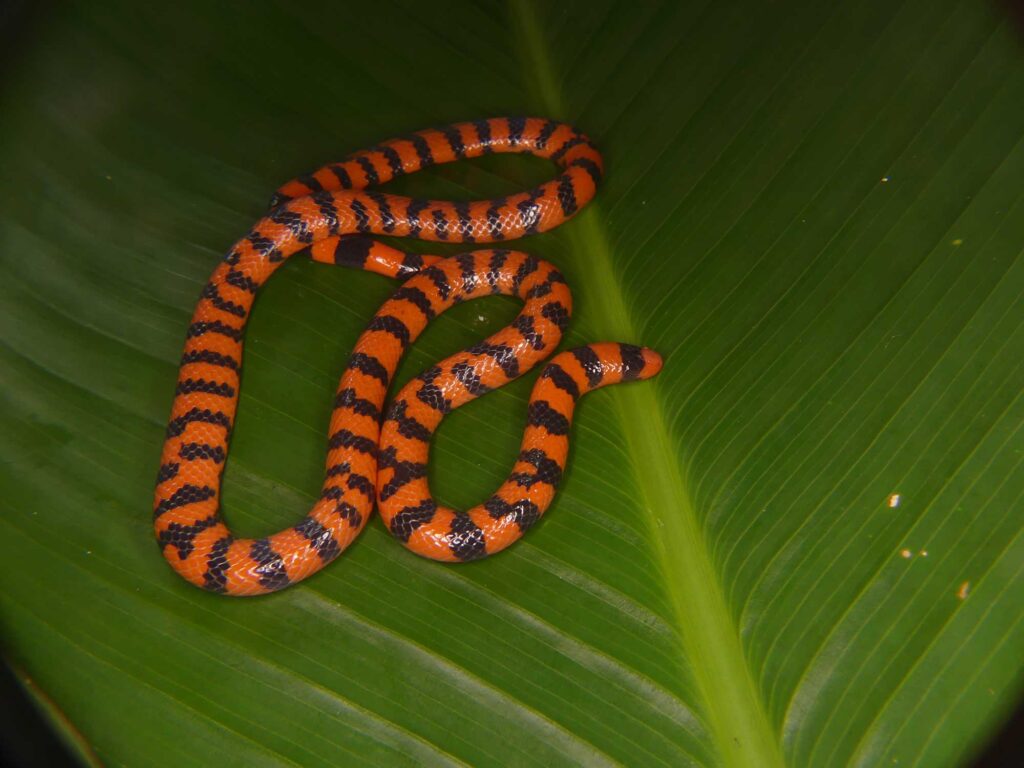 The American pipe snake (Anilius scytale) is harmless but is frequently mistaken for dangerously venomous coral snakes. This species is a specialized predator of elongated vertebrates, such as snakes, legless lizards, and legless amphibians (caecilians). Image credit: Dan Rabosky, University of Michigan Museum of Zoology.

Grundler and Rabosky also found a tremendous amount of variability in how fast snakes evolve new diets. Some groups, such as blind snakes, evolved more slowly and maintained similar diets—mostly ants and termite larvae—for tens of millions of years.

On the other extreme are the dipsadine snakes, a large subfamily of colubroid snakes that includes more than 700 species. Since arriving in the New World roughly 20 million years ago, they have experienced a sustained burst of dietary diversification, according to the new study. 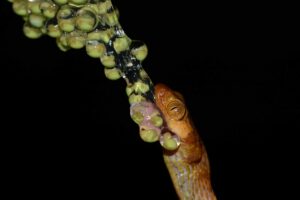 The dipsadines include goo-eaters, false water cobras, forest flame snakes and hognose snakes. Many of them imitate deadly coral snakes to ward off predators and are known locally as false coral snakes.

“In a relatively short period of time, they’ve had species evolve to specialize on earthworms, on fishes, on frogs, on slugs, on snakelike eels—even other snakes themselves,” Grundler said.

“A lot of the stories of evolutionary success that make it into the textbooks—such as Darwin’s famous finches—are nowhere near as impressive as some groups of snakes. The dipsadines of South and Central America have just exploded in all aspects of their diversity, and yet they are almost completely unknown outside the community of snake biologists.”

Rabosky and Grundler stressed that their study could not have been done without the information gleaned from preserved museum specimens.

“Some people think that zoology collections are just warehouses for dead animals, but that stereotype is completely inaccurate,” Rabosky said. “Our results highlight what a tremendous, world-class resource these collections are for answering questions that are almost impossible to answer otherwise.”

Funding for the study was provided by the National Science Foundation and the David and Lucile Packard Foundation. Once the embargo lifts, the PLOS Biology paper will be available at: Rapid increase in snake dietary diversity and complexity following the end-Cretaceous mass extinction.