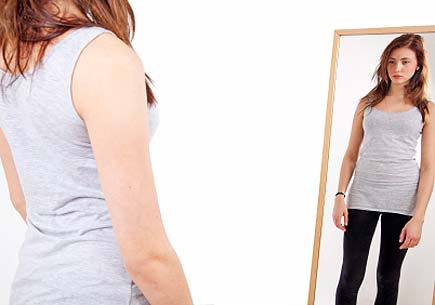 Researchers also found that six out of 10 U-M undergraduates had become more concerned about their bodies after starting school, and that 10 percent were purging in some way—vomiting and/or using laxatives, diuretics or diet pills.

The online survey, U-SHAPE: University Study of Habits, Attitudes and Perceptions around Eating, is believed to be the first comprehensive research of its kind.

A multidisciplinary team of faculty, researchers and counselors from the U-M School of Public Health, School of Education, Medical School, University Health Service (UHS), Counseling and Psychological Services (CAPS), and Ann Arbor’s Center for Eating Disorders surveyed 10,000 undergraduates and graduate students in October 2012. The findings from 3,088 responses can be generalized to the full student body and have important implications for policy and practice, the researchers said.

“Having a representative campuswide sample like that obtained through U-SHAPE means we can, for the first time, begin to understand what is going with the larger, more diverse student body on campus,” said Sarah Ketchen Lipson, a dual-degree doctoral student in public health and education.

Previous studies on eating disorders have focused on specific groups: athletes, sorority members or students in courses such as psychology, nutrition and nursing.

“U-SHAPE findings allow for greater differentiation between individual students based on specific characteristics as well as greater generalization to other populations,” said Dr. Suzanne Dooley-Hash, assistant professor of emergency medicine at the U-M Health System.

“In addition, U-SHAPE includes more aspects of eating and body image than have ever been included in a single study of college students in the past. This will allow for more in-depth analyses of the interactions between the different related factors.”

The latter finding surprised Dr. Diane Mickley, co-founder and chair of the grants committee for the Global Foundation for Eating Disorders (GFED) that funds U-SHAPE.

“Stigma was much higher than I expected. Increase in restrictive eating and preoccupation with weight after arrival at college was worse than I expected—I actually imagined it might improve for some compared to high school,” she said. “The trivial number of eating-disordered students getting treatment was far below what I hoped and imagined.”

GFED is a nonprofit founded by Mickley, Rebecca Parekh and Leah Komar Harris. Its mission is to eliminate eating disorders by advancing the development and dissemination of effective treatments. U-SHAPE was the organization’s inaugural grant.

The researchers say the stigma problem may have to do with student uncertainty about identity, social relationships or academic challenges.

“People tend not to share with others when they are struggling, especially in our perfectionistic, high-achieving university community where there may be greater stigma for mental health concerns, or they may worry that they are not naturally good enough to make it in the competitive environment, said Andrea Lawson, clinical social worker for U-M Counseling and Psychological Services.

One result that also caught the researchers’ attention was student attitude toward binge eating.

“When binge eating becomes a chronic behavior it is as deadly as anorexia nervosa and bulimia nervosa and shares the same degree of burden of illness. Unfortunately, conventional wisdom points to dieting as the answer to binge eating or out-of-control eating,” said Judith Banker, founder and executive director of the Center for Eating Disorders in Ann Arbor.

“Dieting is a key factor in the pathogenesis of all the eating disorders including Binge Eating Disorder, so you can see the vicious circle that quickly develops. So the data on binge eating gathered by U-SHAPE has great value.”

Campus leaders say the information provided through the study will be valuable in helping further shape programming around disordered eating and body image.

“Learning about what experiences students have before college and what interactions students have during college shapes our work to create student environments that affirm wellness,” said Malinda Matney, senior research associate for the U-M Division of Student Affairs.

“The programs and food in the University Unions, the nutritional information in University Housing, and the activities across Recreational Sports are all parts of this. We don’t just consider wellness work for our UHS and CAPS colleagues—all of us join them in promoting wellness.”

Ketchen Lipson said that with continued support from GFED, the researchers plan to expand nationally and internationally.