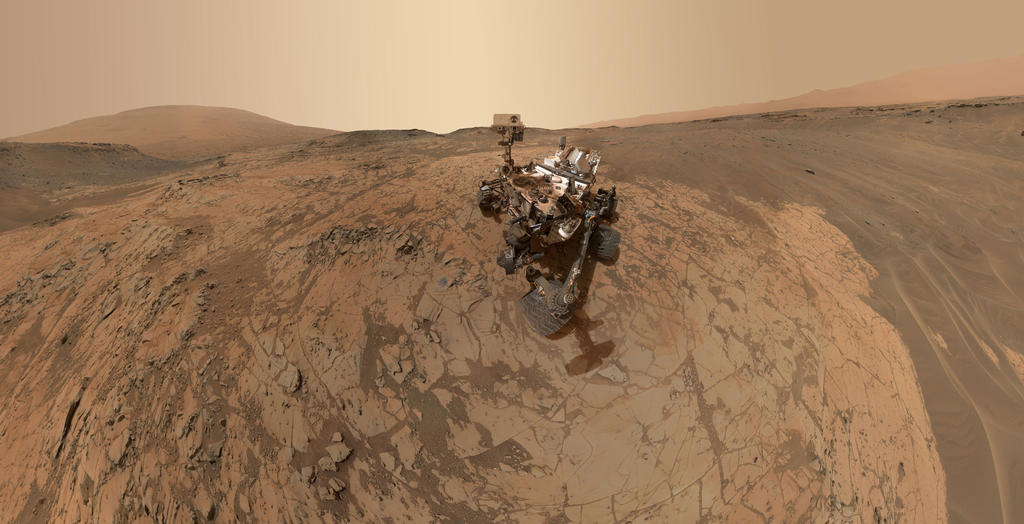 Mars Science Laboratory on Mars. Image credit: NASAANN ARBOR—NASA’s Curiosity rover, which is exploring the Gale crater on Mars, confirms that conditions for liquid water on the Red Planet are favorable.

And in a detail that surprised researchers, the measurements were made in the tropical region of the planet—one of the driest regions.

Nilton Rennó, professor of atmospheric, oceanic and space sciences at the University of Michigan and one of the researchers on the project, said the findings published this week in Nature Geoscience are significant.

“We had made simulations that imitated the conditions of Mars in my laboratory and the results showed us how small amounts of liquid water can exist on the surface of the polar region of Mars,” he said. “Now we have the proof that liquid water is possible even in tropical region. It is an important discovery.”

Life as we know it needs liquid water to survive. While the new study interprets Curiosity’s results to show that microorganisms from Earth would not be able to survive and replicate in the subsurface of Mars, Rennó sees the findings as inconclusive. He points to biofilms—colonies of tiny organisms that can make their own microenvironment.

Curiosity, also known as the Mars Science Laboratory, has detected the salt perchlorate in Gale crater, likely in the form of calcium perchlorate. The salt’s presence is relevant because of its ability to lower the freezing temperature of water. In addition, it aids in the formation of a liquid solution by absorbing atmospheric water vapor through a process called deliquescence.

Rennó was one of the first scientists to hypothesize that liquid water, in the form of brine, could exist on present-day Mars. In 2008, he noticed strange globules in photos the Phoenix lander sent back. While Rennó suggested that salts on the planet’s surface might have led to the drops of liquid, many of his colleagues disagreed. At that point, such salts had never been found on Mars.

But then they were. Among those that Phoenix detected is calcium perchlorate, a mixture of calcium, chlorine and oxygen that’s found in arid places like the Atacama Desert in Chile. Curiosity has since found the salt in several places on Mars’ surface.

These latest results show that the environmental conditions in Gale were favorable for the formation of night transient liquid brine in the highest 5 centimeters of the subsurface, which dries after sunrise.

The data shows that there is an active process of water exchange between the soil and the atmosphere.

The study provides additional evidence that perchlorates are present across the surface of Mars. The researchers say the results have broader implications for the planet exploration strategy, for the verification, availability and water history and to the planetary protection policies.

“These findings show us that we are on the right track to understand the process of formation of liquid water, not only on Mars, but also in other planets and ‘The Icy Worlds,’ as some of the moons of Jupiter and Saturn have been called,” Rennó said.

The paper is titled “Transient liquid water and water activity at Gale crater on Mars.” Part of the research was carried out at the Jet Propulsion Laboratory, California Institute of Technology, under a contract with NASA.