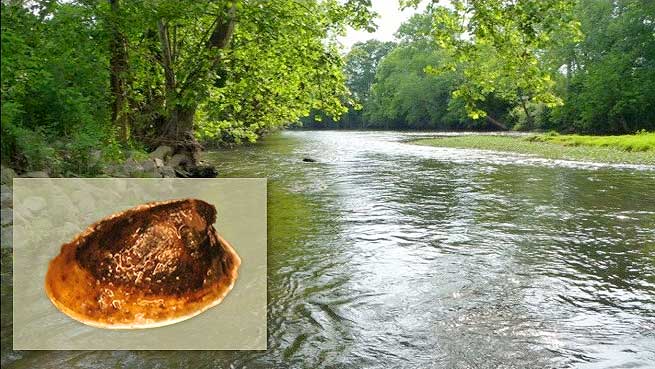 A view of Choccolocco Creek, Talledega County, Alabama, where a surviving population of the wicker ancylid limpet Rhodacmea filosa (insert, not to scale), was recently rediscovered. Credit: Paul Johnson, Alabama Aquatic Biodiversity Center ANN ARBOR—Think “mass extinction” and you probably envision dinosaurs dropping dead in the long-ago past or exotic tropical creatures being wiped out when their rainforest habitats are decimated. But a major mass extinction took place right here in North America in the first half of the 20th century, when 47 species of mollusk disappeared after the watershed in which they lived was dammed.

Now, a population of one of those species—a freshwater limpet last seen more than 60 years ago and presumed extinct—has been found in a tributary of the heavily dammed Coosa River in Alabama’s Mobile River Basin. Researchers from the University of Michigan, the Alabama Aquatic Biodiversity Center and the Kentucky State Nature Preserves Commission reported the rediscovery May 31 in the online, open-access journal PLoS One.

The story of Rhodacmea filosa’s disappearance and reappearance is both a conservation success story and a cautionary tale for other parts of the world where rivers are being dammed, said Diarmaid O’Foighil, professor of ecology and evolutionary biology and a curator at the U-M Museum of Zoology. It’s also an example of how museum specimens collected generations ago can inform scientists of today.

Limpets are snails with shells shaped like caps rather than coils. They make their homes in the riffles and shoals of fast-flowing rivers and streams, where they graze on microscopic algae. When rivers are dammed, shoals and riffles are replaced with reservoirs, and the swiftly-moving water the limpets require is stilled.

The Mobile River Basin, a “global hotspot of temperate freshwater biodiversity,” was extensively industrialized throughout the 20th century, and 36 major dams and locks were built. At the time, few thought much about preserving biodiversity. The prevailing attitude was, “What’s not to like about getting electricity from a natural source—especially in impoverished, rural areas—and using that to drive industrialization?” O’Foighil said. “The dams were seen as signs of progress.”

But progress came at the expense of mollusks that were found only in that area and nowhere else in the world.

“Their habitat was destroyed in huge chunks,” O’Foighil said. The result: 47 of 139 endemic mollusk species were lost, representing a full one-third of all known freshwater mollusk extinctions worldwide.

Then, about 20 years ago, thanks to increased interest in and funding for conservation projects, biologists began searching patches of the drainage that weren’t affected by damming, trying to find remnants of the original, rich fauna and save whatever still could be saved. At the Alabama Aquatic Biodiversity Center (AABC), a former catfish experimental research station has been converted into a captive breeding facility, with the aim of breeding survivors of the mass extinction and reintroducing them into unaffected parts of the watershed.

It was through those efforts that AABC director Paul Johnson discovered the surviving population of what he thought might be Rhodacmea filosa. But how does one definitively identify a species that hasn’t been seen in decades? There are no other living members of the group with which to compare specimens.

That’s where the U-M Museum of Zoology collection comes in. It just so happens that 100 years ago, biologists collected multitudes of mollusks from the Mobile River Basin—never envisioning the habitat destruction and resulting extinctions that were to come—and those specimens ended up in the U-M collection. Coincidentally, the mollusk portion of that collection was largely established by Bryant Walker, an early authority on—you guessed it—the limpet genus Rhodacmea. Furthermore, the last person to study Rhodacmea was a U-M graduate student, some 50 years ago.

“This is very good news,” O’Foighil said. “With conservation biology, usually it’s all gloom and doom, but this is one of those rare events where we have something positive to say.”

But just because survivors have been found, does that mean the species can continue to survive?

“I think they can, because of two things,” O’Foighil said. “We have a persistent population in this little tributary, but we also now have in place the infrastructure for their captive breeding and reintroduction to other tributaries.”

This snail tale might well serve as an object lesson, O’Foighil said. “The industrialization of freshwater watersheds that happened across the U.S. in the last century is now happening all over the world. For instance, right now one of the most egregious examples is the ongoing damming of the Mekong, and there are likely thousands of endemic species there. Even though we’re now more aware of this—of the negative downsides—when it comes to issues of economic development, freshwater biodiversity almost always loses.”

In addition to O’Foighil, Li, Lee, Johnson and Burch, the paper’s authors include Ryan Evans of the Kentucky State Nature Preserves Commission. Funding was provided by the State Wildlife Grant Program, the U.S. Fish and Wildlife Service and the National Science Foundation.