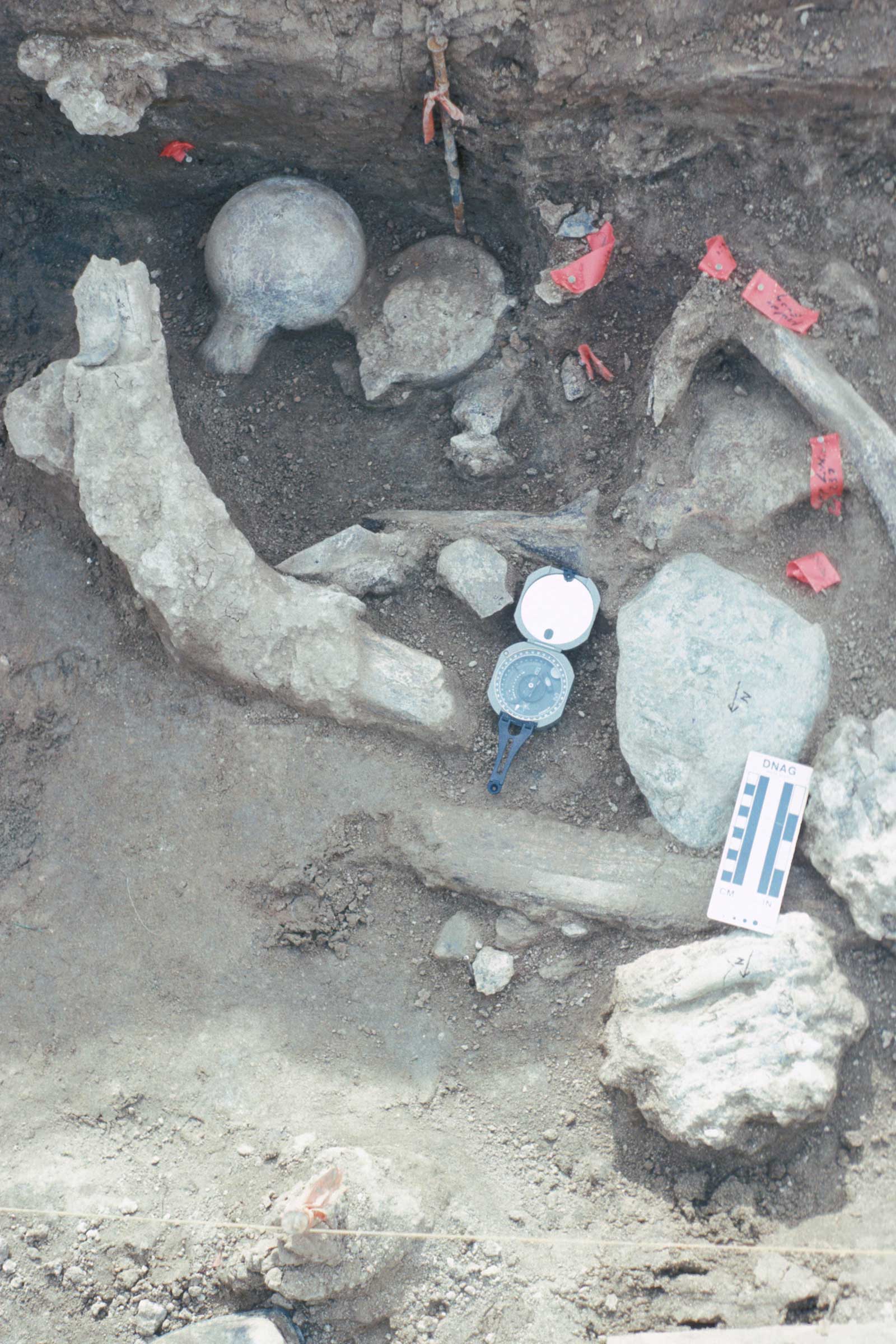 A concentration of fossil bone and rock. The unusual positions of the femur heads, one up and one down, broken in the same manner next to each other is unusual. Mastodon molars are located in the lower right hand corner next to a large rock comprised of andesite which is in contact with a broken vertebra. Upper left is a rib angled upwards resting on a granitic pegmatite rock fragment. Image courtesy: San Diego Natural History MuseumANN ARBOR—An Ice Age paleontological-turned-archaeological site in San Diego preserves 130,000-year-old bones and teeth of a mastodon that show evidence of modification by early humans.

Analysis of these finds dramatically revises the timeline for when humans first reached North America, according to a paper to be published in the April 27 issue of the journal Nature.

The 11 authors of the Nature paper include two University of Michigan paleontologists.

The fossil remains were discovered by San Diego Natural History Museum paleontologists during routine paleontological mitigation work at a freeway expansion project site managed by Caltrans, the California Department of Transportation. The bones, tusks and molars, many of which are sharply broken, were found deeply buried alongside large stones that appeared to have been used as hammers and anvils, making this the oldest in situ, well-documented archaeological site in the Americas.

“This discovery is rewriting our understanding of when humans reached the New World. The evidence we found at this site indicates that some hominin species was living in North America 115,000 years earlier than previously thought,” said Judy Gradwohl, president and chief executive officer of the San Diego Natural History Museum, whose paleontology team discovered the fossils, managed the excavation, and incorporated the specimens into the museum’s research collection. “This raises intriguing questions about how these early humans arrived here and who they were.”

Until recently, the oldest records of human sites in North America generally accepted by archaeologists were about 14,000 years old. But the fossils from the Cerutti Mastodon site (named in recognition of field paleontologist Richard Cerutti, who discovered the site and led the excavation) were found embedded in fine-grained sediments that had been deposited much earlier—during a period long before humans were thought to have arrived on the continent.

“When we first discovered the site, there was strong physical evidence that placed humans alongside extinct Ice Age megafauna. This was significant in and of itself and a ‘first’ in San Diego County,” said Tom Deméré, curator of paleontology and director of PaleoServices at the San Diego Natural History Museum and corresponding author on the paper. “Since the original discovery, dating technology has advanced to enable us to confirm with further certainty that early humans were here much earlier than commonly accepted.” 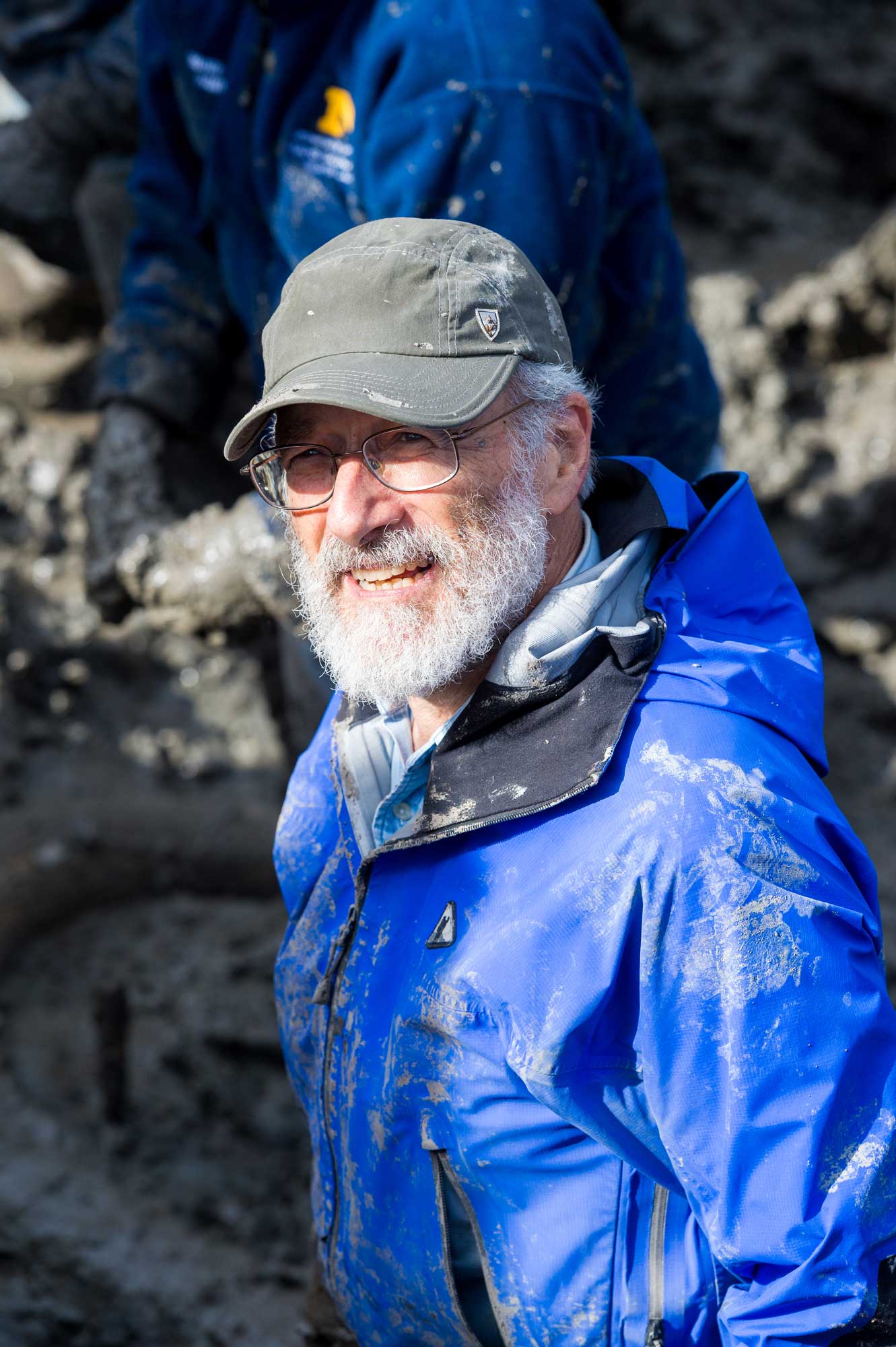 University of Michigan paleontologist Daniel Fisher. Image credit: Daryl Marshke/Michigan PhotographyU-M paleontologist Daniel Fisher, a co-author of the Nature paper, said several lines of evidence from the Cerutti Mastodon site point to “one interpretation that is almost unavoidable because of the way these different lines of argument interlace.”

“We don’t know how this animal died. We don’t know whether humans were part of that death. All that we know is that humans came along some time after the death, and they very strategically set up a process involving the harvesting of marrow from the long bones and the recovery of dense fragments of bone that they could use as raw material for producing tools,” said Fisher, who has been excavating mammoths and mastodons in the Great Lakes region for 38 years and who has also worked on woolly mammoth remains in Siberia for about 20 years.

Since its initial discovery in late 1992, the Cerutti Mastodon site has been the subject of research by top scientists to date the fossils accurately and evaluate microscopic damage on bones and rocks that authors now consider indicative of human activity. In 2014, James Paces, a research geologist with the U.S. Geological Survey, used state-of-the-art radiometric dating methods to determine that the mastodon bones—which were still fresh when they were broken by strategically placed blows from hammerstones—were 130,000 years old, with a conservative error of plus or minus 9,400 years.

“The distributions of natural uranium and its decay products both within and among these bone specimens show remarkably reliable behavior, allowing us to derive an age that is well within the wheelhouse of the dating system,” said Paces, a co-author of the paper.

The finding poses a lot more questions than answers: Who were these people? Are they part of an early—but failed—colonization attempt? Or is there a long, but as of yet, scarcely recognized presence of humans in this hemisphere?

“There’s no doubt in my mind this is an archaeological site,” said Steve Holen, director of research at the Center for American Paleolithic Research, former curator of archaeology at the Denver Museum of Nature & Science, and the lead author of the paper. “The bones and several teeth show clear signs of having been deliberately broken by humans with manual dexterity and experiential knowledge. This breakage pattern has also been observed at mammoth fossil sites in Kansas and Nebraska, where alternative explanations such as geological forces or gnawing by carnivores have been ruled out.”

Both Holen and U-M’s Fisher have conducted experiments with the bones of large modern mammals, including elephants, to determine what it takes to break the bones with large hammerstones and to analyze the distinctive breakage patterns that result.

“And based on decades of experience seeing sites with evidence of human activity, and also a great deal of work on modern material trying to replicate the patterns of fractures that we see, I really know of no other way that the material of the Cerutti Mastodon site could have been produced than through human activity,” he said.

The specimens recovered from the Cerutti Mastodon site will be displayed at the San Diego museum beginning April 26, and a public lecture featuring several of the Nature article authors will take place April 29.

Digital 3-D models of a selection of specimens pointing toward human association at this site can be viewed interactively at the University of Michigan Online Repository of Fossils. Animations featuring these models are also presented as supplementary information associated with the Nature paper.

Co-author Adam Rountrey, collection manager at the U-M Museum of Paleontology, led the effort to create the 3-D digital models of bone and stone specimens from the Cerutti site.

“The models were immensely helpful in interpreting and illustrating these objects,” he said. “We were able to put together virtual refits that allow exploration of how the multiple fragments from one hammerstone fit back together. The 3-D models helped us understand what we were looking at and to communicate the information much more effectively.

“I think the models are important in terms of supporting the paper because they allow anyone to look at this evidence in much the same way the co-authors did. It’s fine to be skeptical, but look at the evidence and judge for yourself. That’s what we’re trying to encourage by making these models available.”

Recovery of the fossils was supported by Caltrans District 11. Major funding for research and display of the artifacts was provided by the National Geographic Society, the Walton Family Fund, Pat Boyce and Debbie Fritsch, the James Hervey Johnson Charitable Educational Trust, and the Downing Family Foundation.

The San Diego Natural History Museum is the second-oldest scientific institution in California and the third-oldest west of the Mississippi. Founded in 1874 by a small group of citizen scientists, the museum’s mission is to interpret the natural world through research, education and exhibits; to promote understanding of the evolution and diversity of southern California and the peninsula of Baja California, Mexico; and to inspire in all people respect for the environment.