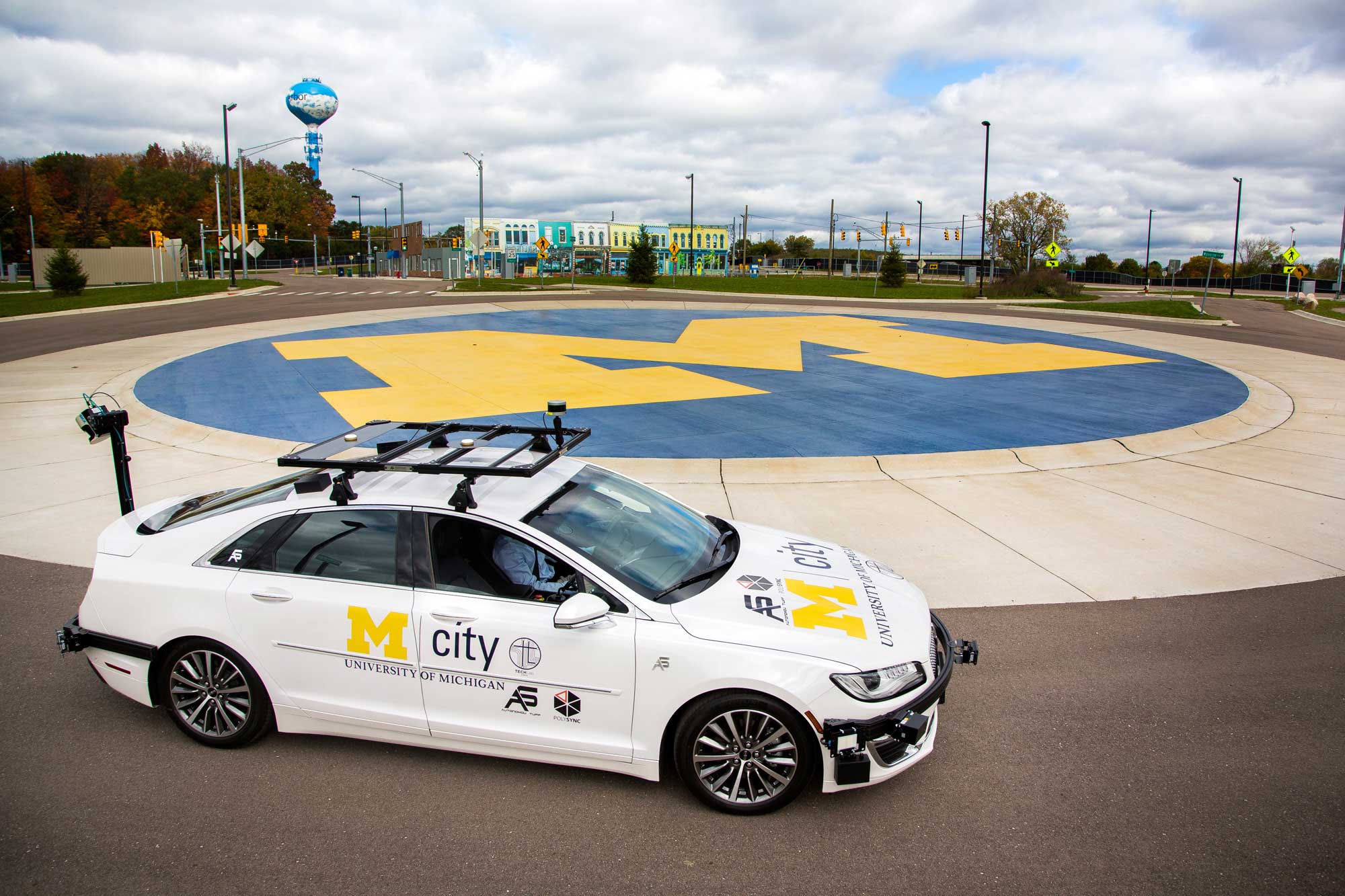 A specially equipped Lincoln MKZ, based at Mcity, is an open-source connected and automated research vehicle available to U-M faculty and students, startups and others to help accelerate innovation. Image credit: University of Michigan

ANN ARBOR—The added weight, electricity demand and aerodynamic drag of the sensors and computers used in autonomous vehicles are significant contributors to their lifetime energy use and greenhouse gas emissions, according to a new study.

However, when savings from the driving efficiencies associated with self-driving vehicles are factored into the equation, the net result is a reduction in lifetime energy use and associated greenhouse gas emissions of up to 9 percent compared to the conventional vehicles examined in the University of Michigan-led study.

“This study explored the tradeoffs between the increased environmental impacts from adding autonomous vehicle equipment with the expected gains in driving efficiency,” said study co-author Gregory Keoleian, director of the Center for Sustainable Systems at U-M’s School for Environment and Sustainability.

“Our findings highlight the need to focus on energy efficiency when designing autonomous vehicles so that the full environmental benefits of this emerging, transformative technology can be realized. We hope this work contributes to a more sustainable mobility ecosystem.”

The findings are scheduled for online publication Feb. 15 in the journal Environmental Science & Technology. The research was supported by grants from the Ford Motor Co.

The study is a detailed assessment of the lifetime contributions of the sensing and computing subsystems in autonomous vehicles to energy use and associated greenhouse gas emissions. These vehicles, formally known as connected and automated vehicles or CAVs, often include multiple cameras, sonar, radar, LiDAR, a GPS navigation system, a computer and support structures.

The researchers looked at two types of CAVs: those powered by internal combustion engines and battery-powered electric vehicles. The two vehicle types were paired with sensing and computer subsystems of three sizes (small, medium and large) to create six scenarios.

Life-cycle assessment methodology was then used to estimate lifetime energy use and greenhouse gas emissions for each scenario, from cradle to grave.

One key finding is that autonomous vehicles with electric powertrains have lifetime greenhouse gas emissions that are 40 percent lower than vehicles powered by internal-combustion engines. The lower emissions result from the inefficiencies involved in producing electricity from fuel combustion, as well as a sharper fuel-consumption increase when extra mass is added to a vehicle powered by an internal-combustion engine.

“We’ve shown in this paper that a battery-electric vehicle is a better platform for CAV components compared to the internal-combustion engine vehicle in terms of minimizing environmental impacts,” said study lead author Jim Gawron, a graduate student at the U-M School for Environment and Sustainability and at the Ross School of Business. The work is part of Gawron’s master’s thesis.

The authors found that the sensing and computing subsystems in connected and automated vehicles could increase a vehicle’s energy use and greenhouse gas emissions by 3 to 20 percent due to increases in power consumption, weight and aerodynamic drag.

But the operational benefits of autonomous vehicles, which include smoother, more efficient traffic flow, are expected to outweigh those increases in most cases.

The study also notes that:

Several caveats accompany the study’s conclusions about the potential environmental benefits of automated vehicles. First, those conclusions are based on the assumption that the operational efficiencies of CAVs can lead to a 14-percent reduction in fuel consumption over conventional vehicles, based on an analysis of previous work by the National Renewable Energy Laboratory.

But if the real-world savings from CAV efficiencies are significantly lower than 14 percent, the environmental benefits are diminished or vanish completely, according to the new study. Also, if the onboard computers require a lot more power than the 200 watts modeled in this study, the net emissions reductions are eliminated.

In addition to Keoleian and Gawron, the authors of the Environmental Science & Technology paper are Robert De Kleine, Timothy Wallington and Hyung Chul Kim of Ford Motor Co.