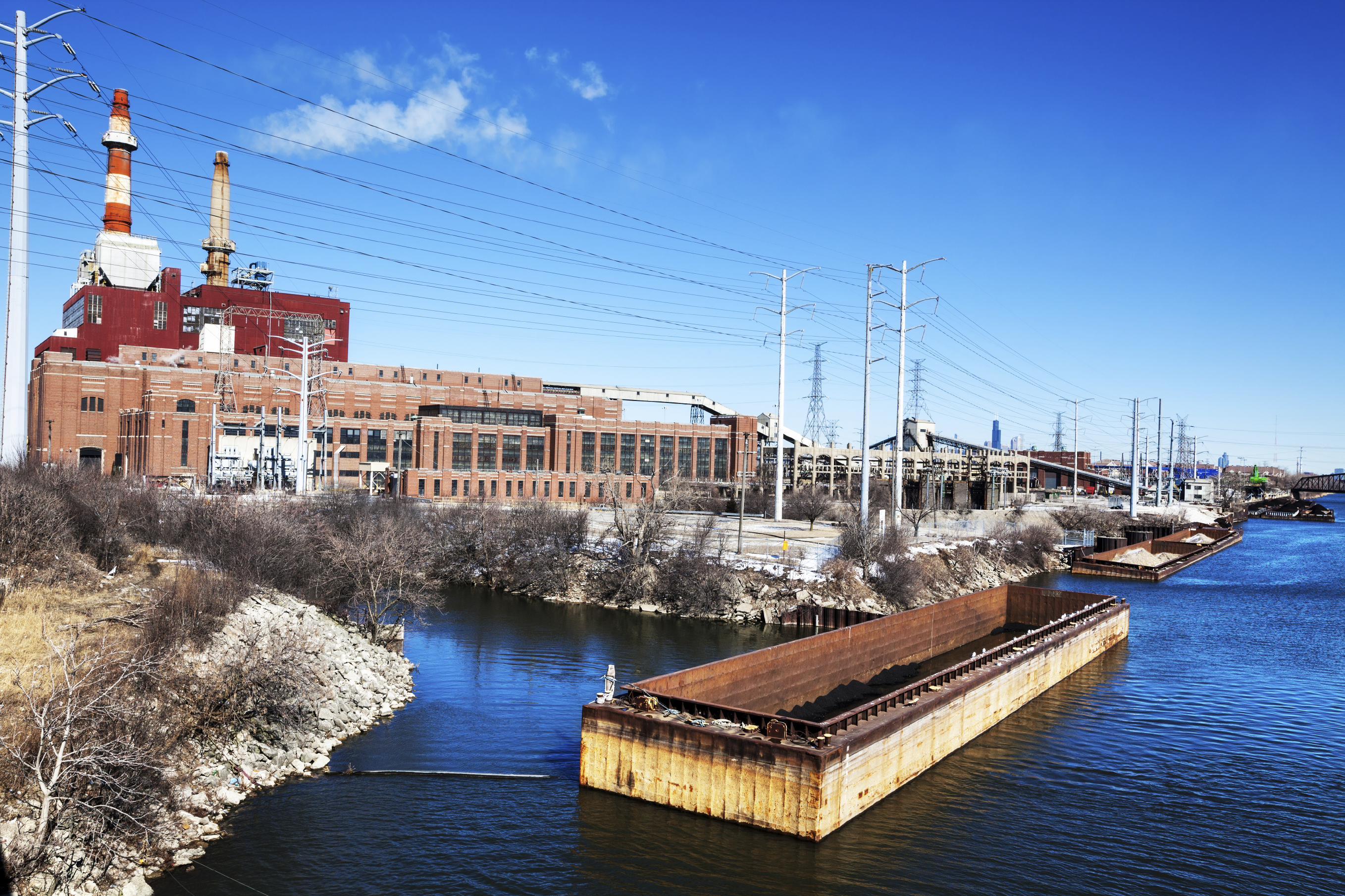 Coal plants like this one in West Chicago release mercury into the atmosphere which can end up in the water supply. This plant, the Crawford Generating Station, is among the last coal-fired plants to shut down in the city, and this move could help bring the already low mercury content in nearby Lake Michigan down even further. Image credit: Steve Geer, Chicago Image GateANN ARBOR—A strip of glass covered in hairy nanoparticles can cheaply and conveniently measure mercury, which attacks the nervous system, and other toxic metals in fluids.

Researchers at the Swiss Federal Institute of Technology (EPFL), Northwestern University and the University of Michigan found that their new method can measure methyl mercury, the most common form of mercury pollution, at unprecedentedly small concentrations. The system, which could test for metal toxins in drinking water and fish, is reported in the current edition of Nature Materials.

Methyl mercury dumped in lakes and rivers accumulates in fish, reaching its highest levels in large, predatory fish such as tuna and swordfish. Young children and pregnant women are advised to avoid eating these fish because mercury can affect the developing brain and nervous system. While metals in drinking water are measured periodically, these measurements say little about migratory fish, including tuna, which may pass through more polluted areas.

“The problem is that current monitoring techniques are too expensive and complex,” said researcher Francesco Stellacci, the Constellium Chair holder at EPFL. “With a conventional method, you have to send samples to the laboratory, and the analysis equipment costs several million dollars.”

Using the device invented by the Swiss-American team, measuring the mercury levels in water or dissolved fish meat is as simple as dipping a strip of coated glass into the fluid. Metals and metallic molecules, such as methyl mercury, typically become positively charged ions in water. When these ions drift between the hairy nanoparticles, the hairs close up, trapping the pollutant. Passing a current over the strip of glass reveals how many ions are caught in the “nano-velcro.” Each ion allows the strip to conduct more electricity.

U-M researchers Hao Jiang and Sharon Glotzer, the Churchill Professor of Chemical Engineering, performed computer simulations that investigated how the nano-velcro traps pollutants. They showed that the hairy nanoparticles are choosey about which ions they capture, confirming that the strips can give reliable measures of specific toxins as demonstrated by the experimental findings of the Swiss group.

“By making detection of pollutants and toxins cheap and easy to do, more testing at the source will lead to safer foods on the dinner table and in kids’ lunchboxes,” Glotzer said.

The scientists targeted particular pollutants by varying the length of the nano-hairs. This approach is especially successful for methyl mercury, and the device can measure it with record-breaking accuracy, detecting concentrations as low as 600 methyl mercury ions per cubic centimeter of water. Fortunately, that level of precision won’t break the bank. The researchers estimate that the coated glass strips could cost less than 10 dollars each, while the measurement device will cost only a few hundred dollars. It could gauge the concentration of metals onsite and within minutes.

The researchers tested their method in Lake Michigan, near Chicago.

“The goal was to compare our measurements to FDA measurements done using conventional methods,” Stellacci said.

Despite the industrial activity in the region, mercury levels were extremely low, in agreement with the FDA’s analysis. The team also tested a mosquito fish from the Everglades.

“We measured tissue that had been dissolved in acid. The goal was to see if we could detect even very minuscule quantities,” said Bartosz Grzybowski, the K. Burgess Professor of Physical Chemistry and Chemical Systems Engineering at Northwestern University, noting the species is too low on the food chain to accumulate high levels of mercury.

“With this technology, it will be possible to conduct tests on a much larger scale in the field, or even in fish before they are put on the market,” said researcher Hyewon Kim, MIT student visiting EPFL.

Funding for this research came from ENI, via the ENI-MIT Alliance; the U.S. Defense Threat Reduction Agency via a grant to MIT and U-M; and the U.S. Department of Energy via a Nonequilibrium Energy Research Center grant to Northwestern and the U-M.