The 6,000-square-foot garden runs the length of Matthaei’s conservatory, and is made up of paved paths separating plant beds that are unconventionally organized, according to Bob Grese, director of Matthaei Botanical Gardens and Nichols Arboretum.

“Usually plants are grouped by families or by what part of the plant is harvested, but for educational purposes, we decided to group them by systems of the human body and the conditions they treat,” he said. “For instance, foxglove is a common garden plant that can be found in the ‘cardiovascular’ section of the garden because it is used as an ingredient in the heart medicine Digitalis. Another example is stevia, a plant used to add sweetness to the diet without raising blood sugar, which can be found in the ‘diabetic/metabolic’ section.”

Drawing of medicinal garden layout. Image courtesy: Matthaei Botanical GardensGrese says that he wants visitors to understand that this unique layout will not aesthetically look like a traditional garden.

“Due to the fact that plants are useful for medicinal purposes at different points in their life cycle, one plant may be flowering while another may be ready for harvesting,” he said.

The garden, which will be a permanent living exhibition open to scholars, researchers and the general public, boasts more than 110 plant varieties that are listed on the medicinal garden’s website. QR codes linking to more information about specific plants can be found on labels throughout.

Matthaei’s team, who have been working on the project for more than two years, collaborated with Leslie Shimp, professor at the U-M College of Pharmacy, and Dr. Sara Warber, clinical associate professor at the U-M Medical School, in order to ensure that all plants selected for the garden have demonstrated strong clinical evidence for effectiveness.

“There are many gardens that address medicinal plants, but very few attempt to be evidence-based like this one.” said Warber, who started the Integrative Medicine program at U-M and plans to use the garden as a teaching tool for her students. “So often, we talk about plants and the conditions they treat, but many haven’t seen or considered them in their original state.”

According to David Michener, associate curator at Matthaei Botanical Gardens and Nichols Arboretum, the opening of the garden pays homage to a long tradition of interdisciplinary partnerships between pharmacy, medicine and botany programs at U-M.

“The first documented botanical garden at the university, situated just off the Diag and established in 1899 was, at least in part, a pharmaceutical garden as cited in documents and photographs at the Bentley Historical Library,” Michener said. “There is a lot of information available to confirm that interest in the practical and medical value of plants was central in the early history of the university and in the development of pharmaceutical industries in Michigan.” 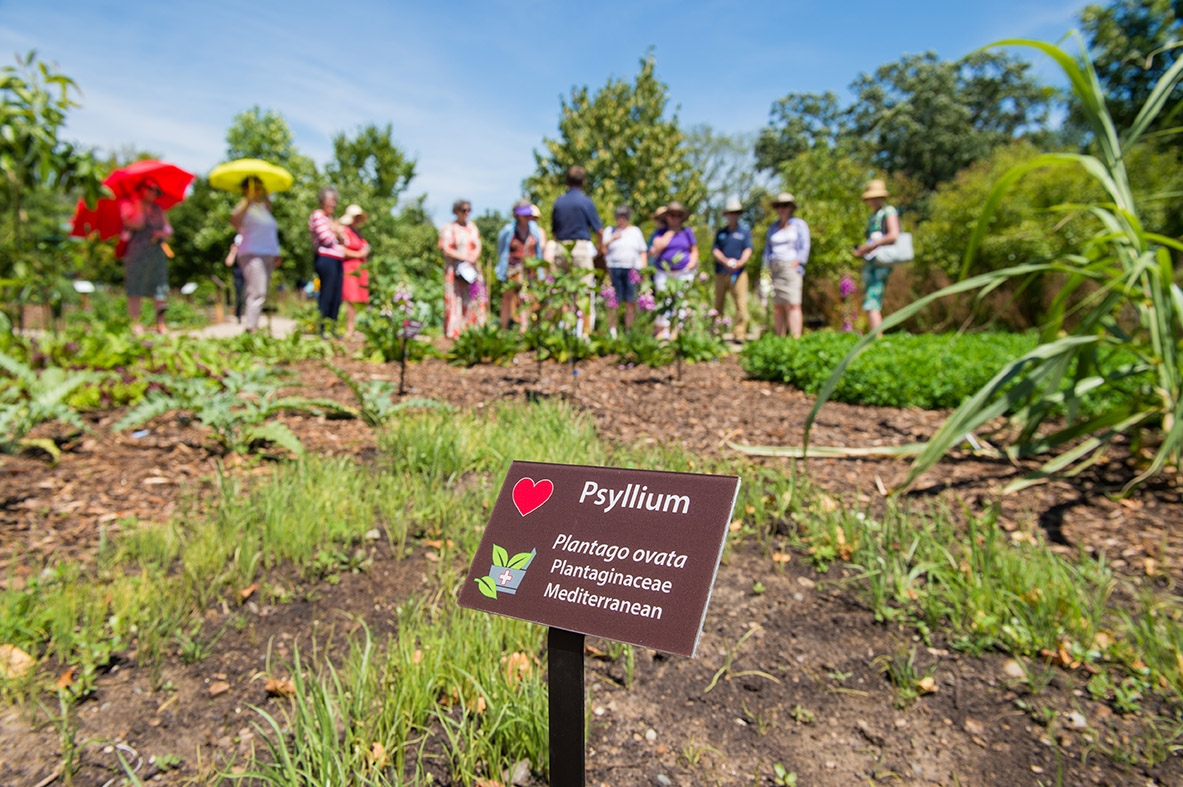 Medicinal Garden, University of Michigan Matthaei Botanical Gardens. Image credit: Austin ThomasonTraditionally, students in medicine and pharmacy had rigorous coursework in botany as a routine part of their training, which is likely why Dr. Julius O. Schlotterbeck from the Department of Pharmacy worked with Dr. V.M. Spalding from the Department of Botany to create this first garden at the turn of the 19th century—they wanted to provide their students a hands-on learning experience surrounding these curriculum requirements.

Michener said that it is in that spirit that they will work to provide educational programs and learning opportunities at the medicinal garden for university professors and students, as well as K-12 classes and the general public.

“After giving the first few tours, I’ve learned that there’s a need for this garden as a tool for teaching and learning—people sometimes do not realize the steps that take place between taking a plant that is growing in their garden and producing a product that is therapeutically useful,” Michener said. “I’ve had many conversations already about the difference between herbal remedies and pharmaceuticals. I also think it’s a great way for us to promote the importance of preserving and promoting biodiversity. You never know when a new discovery will be made.”