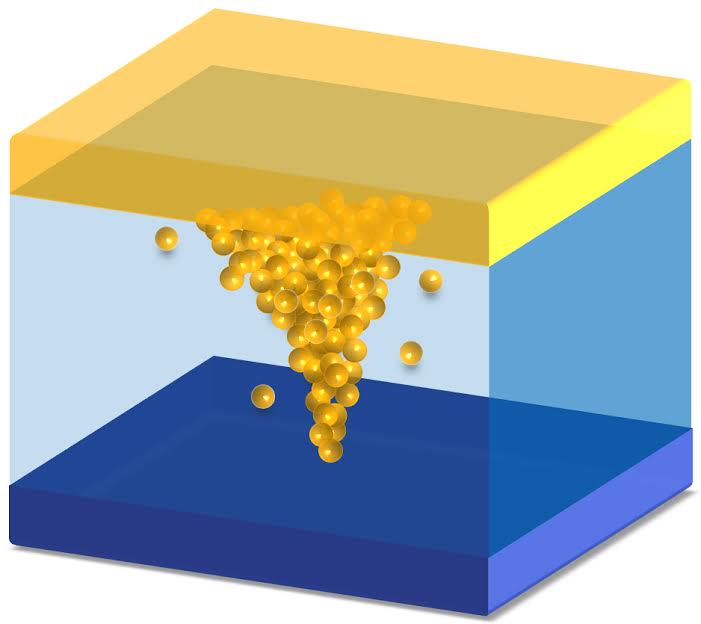 An illustration of metal particles moving to form a conducting filament in a memristor – a next-generation computer component that combines memory and logic functions. Image credit: Wei LuANN ARBOR—In work that unmasks some of the magic behind memristors and “resistive random access memory,” or RRAM—cutting-edge computer components that combine logic and memory functions—researchers have shown that the metal particles in memristors don’t stay put as previously thought.

The findings have broad implications for the semiconductor industry and beyond. They show, for the first time, exactly how some memristors remember.

“Most people have thought you can’t move metal particles in a solid material,” said Wei Lu, associate professor of electrical and computer engineering at the University of Michigan. “In a liquid and gas, it’s mobile and people understand that, but in a solid we don’t expect this behavior. This is the first time it has been shown.”

The results could lead to a new approach to chip design—one that involves using fine-tuned electrical signals to lay out integrated circuits after they’re fabricated. And it could also advance memristor technology, which promises smaller, faster, cheaper chips and computers inspired by biological brains in that they could perform many tasks at the same time.

Lu, who led the project, and colleagues at U-M and the Electronic Research Centre Jülich in Germany used transmission electron microscopes to watch and record what happens to the atoms in the metal layer of their memristor when they exposed it to an electric field. The metal layer was encased in the dielectric material silicon dioxide, which is commonly used in the semiconductor industry to help route electricity.

They observed the metal atoms becoming charged ions, clustering with up to thousands of others into metal nanoparticles, and then migrating and forming a bridge between the electrodes at the opposite ends of the dielectric material.

They demonstrated this process with several metals, including silver and platinum. And depending on the materials involved and the electric current, the bridge formed in different ways.

The bridge, also called a conducting filament, stays put after the electrical power is turned off in the device. So when researchers turn the power back on, the bridge is there as a smooth pathway for current to travel along. Further, the electric field can be used to change the shape and size of the filament, or break the filament altogether, which in turn regulates the resistance of the device, or how easy current can flow through it.

Computers built with memristors would encode information in these different resistance values, which is in turn based on a different arrangement of conducting filaments.

Memristor researchers like Lu and his colleagues had theorized that the metal atoms in memristors moved, but previous results had yielded different shaped filaments and so they thought they hadn’t nailed down the underlying process.

“We succeeded in resolving the puzzle of apparently contradicting observations and in offering a predictive model accounting for materials and conditions,” said Ilia Valov, principle investigator at the Electronic Materials Research Centre Jülich. “Also the fact that we observed particle movement driven by electrochemical forces within dielectric matrix is in itself a sensation.”

Lu is a co-founder of Crossbar Inc., a Santa Clara, Calif.-based startup working to commercialize RRAM. Crossbar has just completed a $25 million Series C funding round.

The study is titled “Electrochemical dynamics of nanoscale metallic inclusions in dielectrics.” It is newly published online in Nature Communications. The work was funded by the Air Force Office of Scientific Research, the U.S. Department of Energy and the National Science Foundation and the German Research Foundation priority program SFB 917.