In a dazzling presentation from start to finish, the Michigan Marching Band’s Sept. 11 halftime show on Saturday commemorated the 20th anniversary of the terrorist attacks.

Michigan stadium erupted in applause as the marching band’s members spelled out the word “heroes” to start the show while launching into John Williams’ “Summon The Heroes.”

Throughout the emotional performance, which included lasers, glowing orbs, high-powered flashlights and more, members of the band created memorable formations of the World Trade Center’s twin towers, an outline of the United States, and an American Flag. 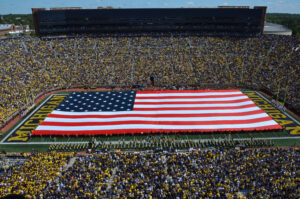 One of many patriotic tributes the Michigan Marching Band has performed over the years, their halftime show on Sept. 7, 2019 during the game against Army Black Knights unveiled a massive American Flag and a full lineup of patriotic music. Image credit: Robert Brown

Titled “We Remember” and produced with Los Angeles-based Durant Design, it is the most elaborate, extravagant and spectacular live program college football fans saw on that day, said John Pasquale, director of the Michigan Marching Band. 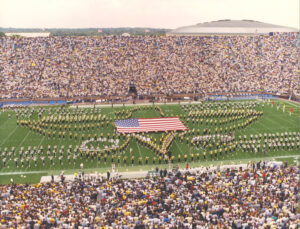 On Sept. 22, 2001, just 10 days after the 9/11 attacks, the Michigan Marching Band shared the field with the Western Michigan University Marching Band to pay tribute to those who lost their lives. Image credit: Dick Gaskill

“Nothing like this has ever been done before by a college marching band. Ever,” he said.

Pasquale co-designed the program with Richard Frey, associate director of the marching band, and Durant Design’s Timothy Durant, whose credits include such live events as the NFL Experience, the 2014 Winter Olympic Games and Paul McCartney’s 2013 tour. Durant Design has done the Grammys, Emmys and Country Music Awards, among many other live shows for broadcast. They also worked with the Michigan Marching Band during the 2014 season, shortly after night games were approved at Michigan Stadium.

Some 80 volunteers were on hand, including other marching band alumni and students from U-M’s School of Music, Theatre & Dance and from Ann Arbor’s Pioneer High School Marching Band. 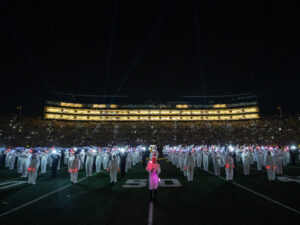 The show was supported by a gift from march band fans Bill and Janelle Sykes, who wanted to deliver a special experience to the seniors and a poignant experience for the fans. The Sykes family wanted to repay the band for three decades of entertainment in Michigan Stadium. Their son joined the trumpet section in 2018.

“We were honored to help bring the band’s vision to life on the field, in remembrance of the 20th anniversary of 9/11,” the Sykes said. “We admire the dedication of all members of the marching band and thank you for making our time at Michigan football games so special.”

Musical arrangements were by Scott Boerma, Jay Bocook and Chuck Ricotta, and choreography was by Joan Noble-Pruett.

In addition to the spectacular halftime show, fans were also moved by a pregame tribute that included a moment of silence to remember those lost, a bagpipe performance of “Amazing Grace” by Air Force Master Sergeant retired David Vittetoe set to photos of U-M and University of Washington alumni who died in the tragic events of 9/11, and a performance of “God Bless America” by the Detroit Youth Choir as 150 first responders opened a massive American Flag spanning the field of the stadium.