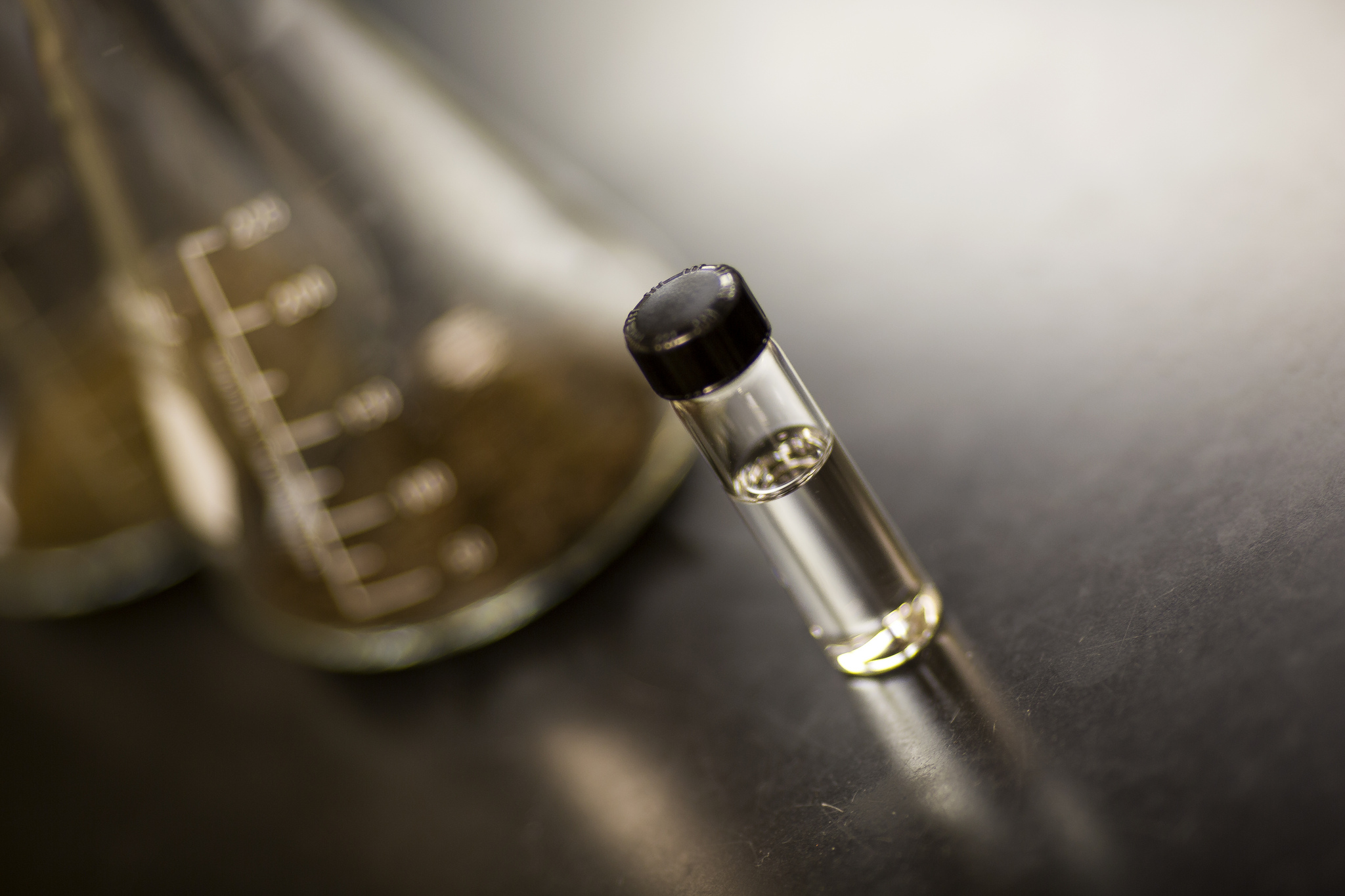 The biofuel isobutanol, in the vial, was produced by a microbe community feeding on corn stalks and leaves or switchgrass, shown in the flasks behind. Image credit: Joseph XuANN ARBOR—A fungus and E. coli bacteria have joined forces to turn tough, waste plant material into isobutanol, a biofuel that matches gasoline’s properties better than ethanol.

University of Michigan research team members said the principle also could be used to produce other valuable chemicals such as plastics.

“We’re hoping that biofuels made in such an efficient way can eventually replace current petroleum-based fuels,” said Xiaoxia “Nina” Lin, assistant professor of chemical engineering and leader of the research.

Gallon for gallon, isobutanol gives off 82 percent of the heat energy gasoline provides when burned, compared to ethanol’s 67 percent. Ethanol also has a tendency to absorb water, corroding pipelines and damaging engines, but isobutanol doesn’t mix easily with water. While ethanol serves as a mixer in the gasoline infrastructure today, many researchers argue that isobutanol could be a replacement.

Equally important, this system makes isobutanol from inedible plant materials, so fuel production won’t drive up food costs. Lin’s team used corn stalks and leaves, but their ecosystem should also be able to process other agricultural byproducts and forestry waste.

While much previous research has focused on trying to create a “superbug” that could tackle the whole job of processing waste plant materials into biofuels, Lin and her colleagues argue that a team of microbial specialists can do better.

The fungus Trichoderma reesei is already very good at breaking down tough plant material into sugars. Escherichia coli, meanwhile, is relatively easy for researchers to genetically modify. James Liao’s lab at the University of California-Los Angeles provided E. coli bacteria that had been engineered to convert sugars into isobutanol.

The Lin group put both microbe species into a bioreactor and served up corn stalks and leaves. Colleagues at Michigan State University had pre-treated the roughage to make it easier to digest.

“If you’ve ever had puffed rice cereal, it’s somewhat analogous,” said Jeremy Minty, first author of the paper to be published in the Proceedings of the National Academy of Sciences and a recent doctoral graduate in Lin’s lab.

The fungi turned the roughage into sugars that fed both microbe species with enough left over to produce isobutanol. The team managed to get 1.88 grams of isobutanol per liter of fluid in the ecosystem, the highest concentration reported to date for turning tough plant materials into biofuels. They also converted a large proportion of the energy locked in the corn stalks and leaves to isobutanol—62 percent of the theoretical maximum.

The harmonious coexistence of the fungi and bacteria, with stable populations, was a key success of the experiment. 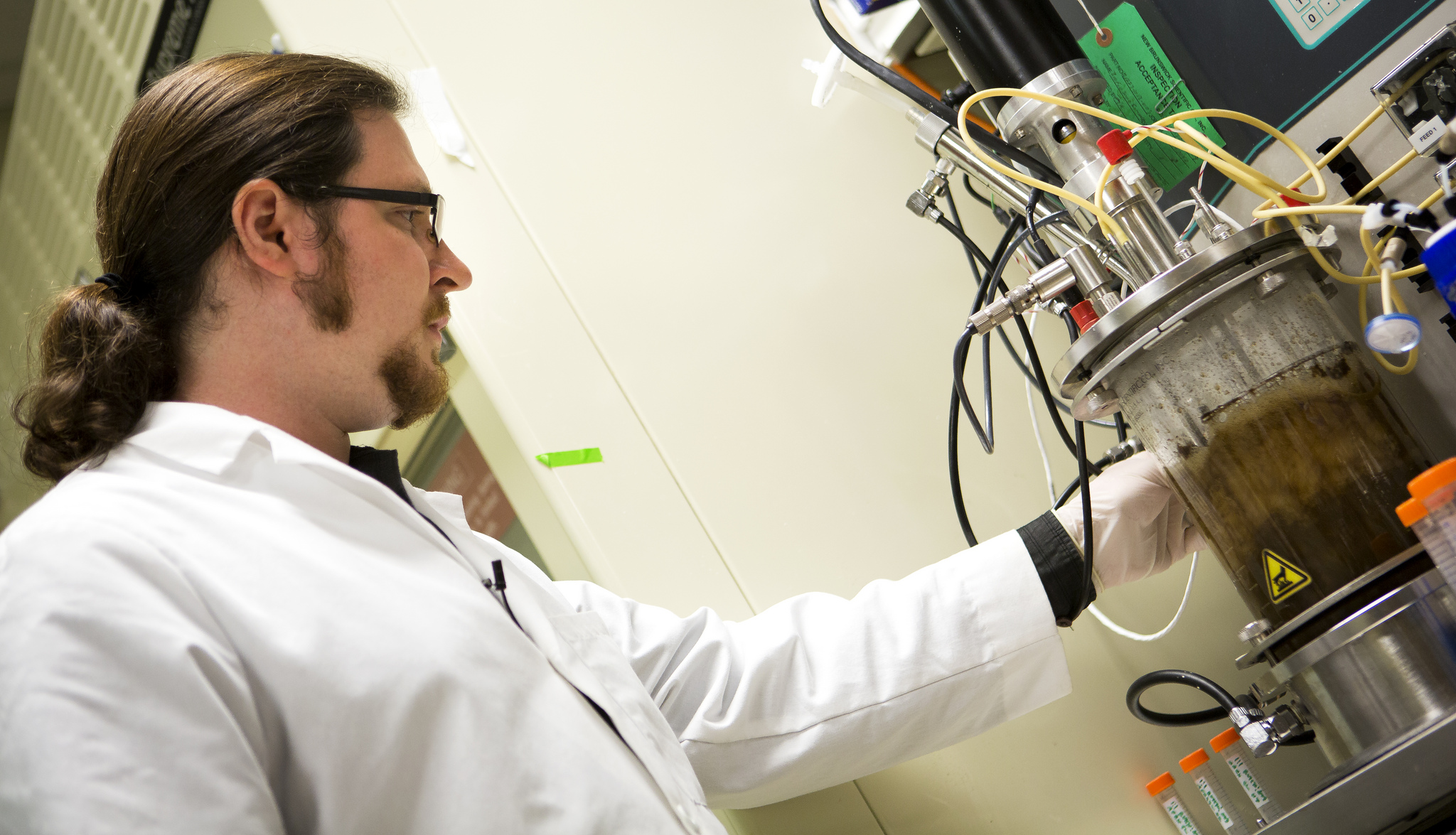 Jeremy Minty, a recent doctoral graduate in Nina Lin’s lab at U-M, adjusts the bioreactor in which the fungus and bacteria convert tough plant materials to biofuel. Image credit: Joseph Xu“A lot of times, one species will dominate the culture and the other will die off,” Minty said. “This is a common problem when you’re trying to create these systems.”

Convincing the microbes to play nicely pays off.

Lin’s team used game theory to analyze the relationship between the fungi and bacteria. Breaking cellulose down into sugar is hard work, so T. reesei’s tendency to do this and then share the spoils mark it as a cooperator. Meanwhile, the E. coli use the sugars without offering the fungus anything in return, which makes it a cheater.

Even so, the bacteria didn’t take over the colony because the fungi produce the sugars near their cell membranes, which gives them the first crack at using the sugars. The researchers can control E. coli’s advantage by tweaking how quickly the bacteria grow.

Minty and others in Lin’s group are now trying to improve on their energy conversion rate and increase the tolerance of the T. reesei and E. coli to isobutanol. The fuel is toxic, but higher concentrations will drive down the cost of isolating the fuel.

“We’re really excited about this technology,” Minty said. “The U.S. has the potential to sustainably produce 1 billion tons or more of biomass annually, enough to produce biofuels that could displace 30 percent or more of our current petroleum production.”

Moreover, by engineering the bacteria differently, they believe their system could produce a variety of petroleum-based chemicals in a sustainable way.

A paper on this research, “Design and characterization of synthetic fungal-bacterial consortia for direct production of isobutanol from cellulosic biomass,” will be published online in the Proceedings of the National Academy of Sciences early edition the week of Aug. 19. The work was funded by the National Science Foundation, the Department of Energy and the U-M Office of the Vice President for Research. The university is seeking commercialization partners to help bring the technology to market.