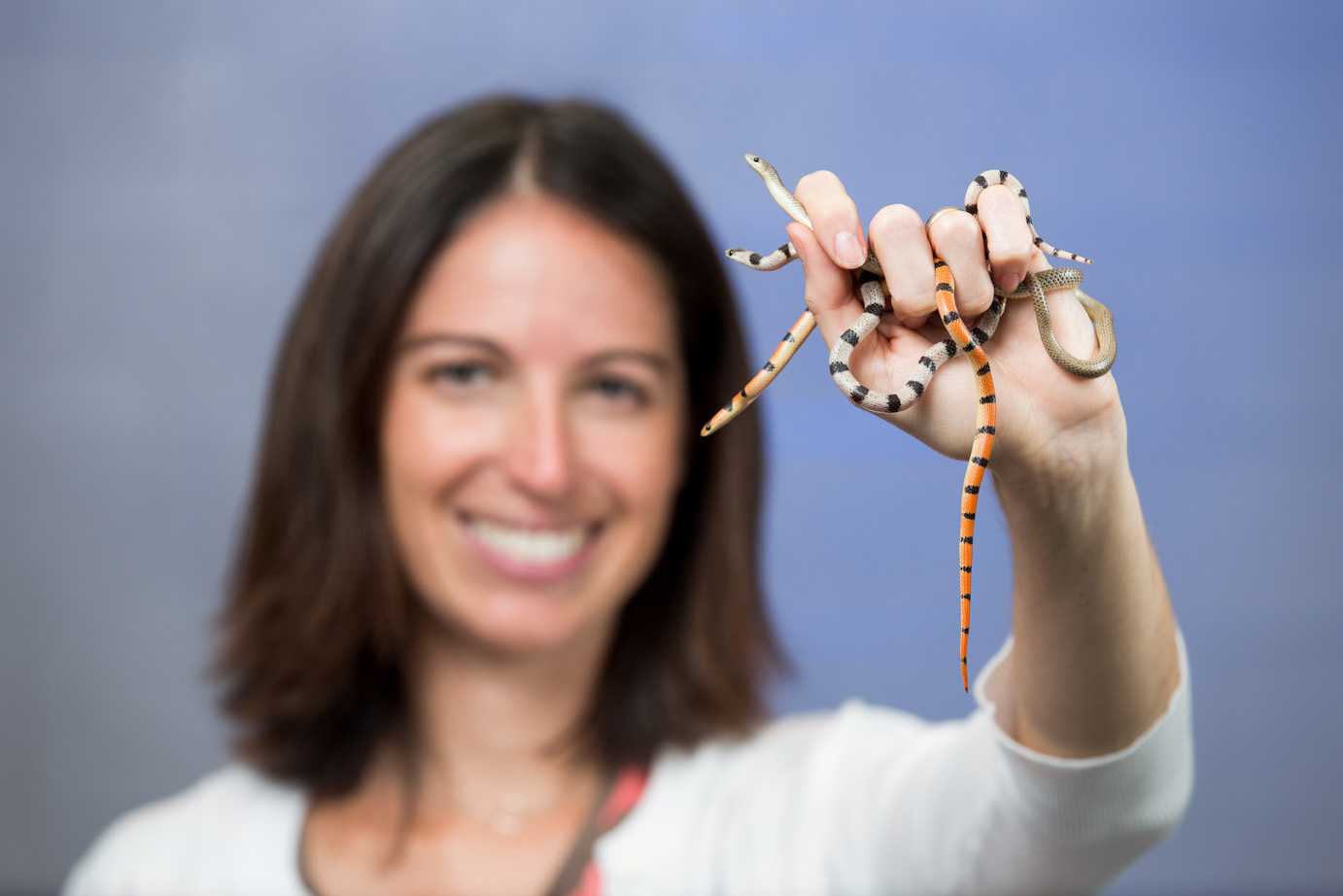 Problem is, the rhyme is unreliable due to the vast amount of color and pattern variation, called color polymorphism, found in both coral snakes and their mimics. The harmless ground snake, a common coral snake mimic, displays four strikingly different color patterns, only one of which closely resembles its dangerous red-and-black-and-yellow-banded counterpart.

If a mimicry system offers protection from predators, then why hasn’t evolution eliminated the “failed mimics,” such as ground snakes sporting color patterns that don’t remotely resemble a coral snake? That’s the puzzle that University of Michigan evolutionary biologist Alison Davis Rabosky has spent the last four years trying to solve. 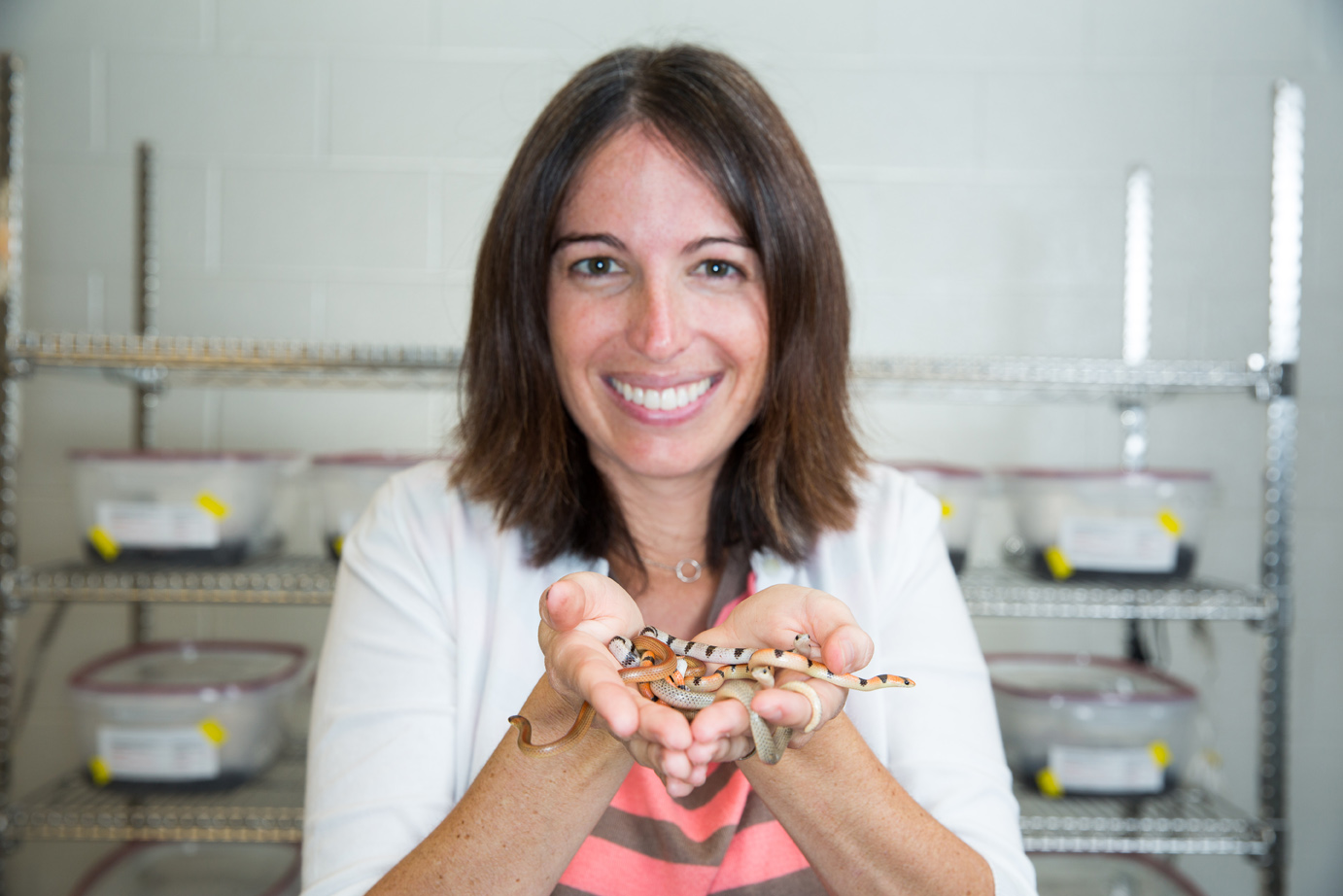 U-M evolutionary biologist Alison Davis Rabosky with a handful of ground snakes. The non-venomous snakes are common in the central and western United States, as well as in Mexico. Image credit: Eric Bronson“Logic predicts that non-mimics should by eaten preferentially by predators and, given enough time, you should end up with a single color type in the population. So the widespread co-occurrence of mimic and non-mimic color patterns is a puzzling and longstanding evolutionary paradox,” said Rabosky, an assistant research scientist in the Department of Ecology and Evolutionary Biology and an assistant curator of herpetology at the Museum of Zoology.

While Rabosky and colleague Christian L. Cox of the University of Virginia don’t claim to have fully resolved the paradox, they did gain insights that help explain the persistence of non-mimic color patterns in ground snakes, especially rare patterns. It turns out that if you’re a ground snake, displaying a rare color pattern also provides an evolutionary edge.

Rabosky and Cox spent years flipping thousands of rocks in search of ground snakes in the central and western United States and in Mexico. They collected more than 350 live ground snakes and studied some 2,500 specimens from 12 museum collections. 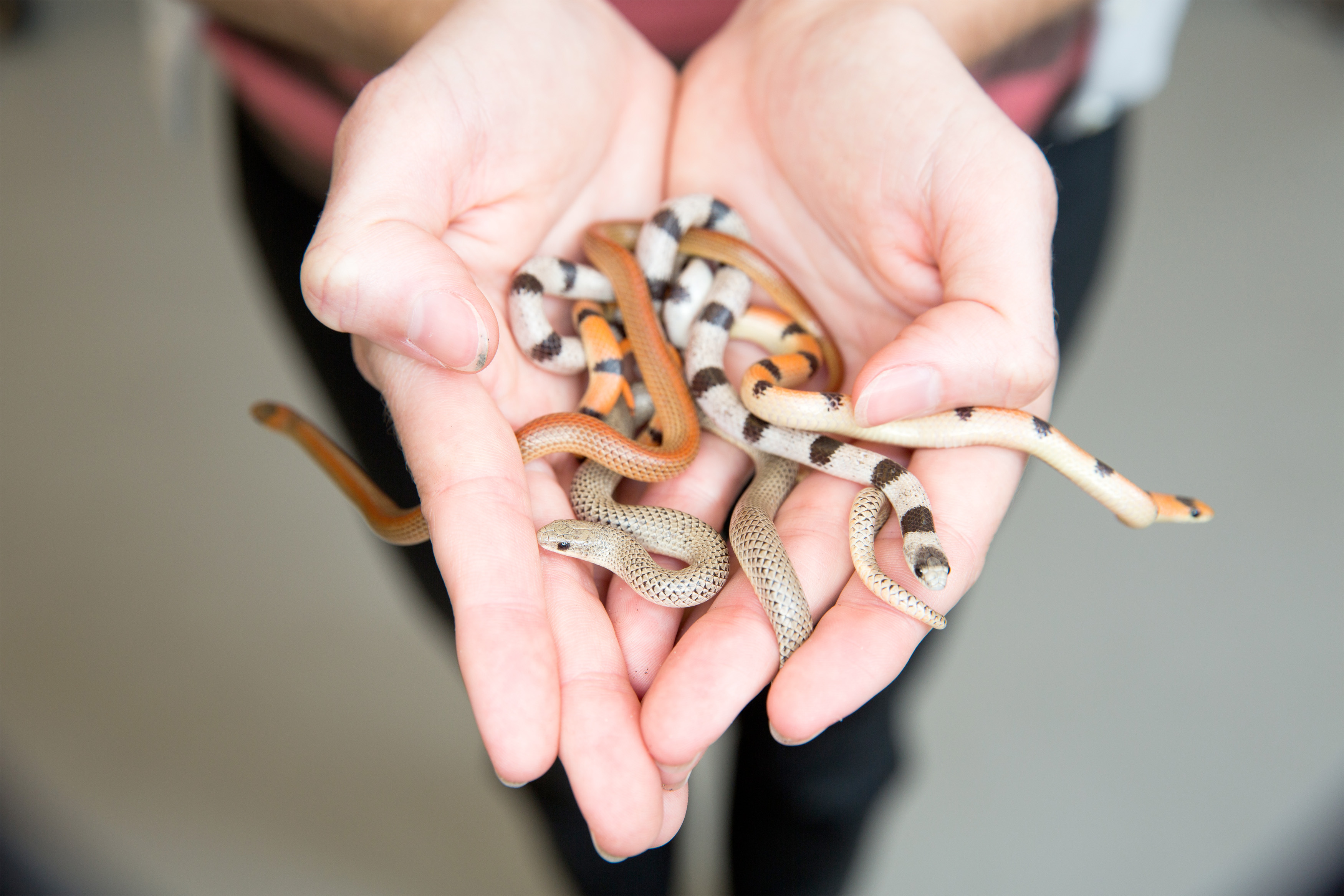 Some of the museum specimens examined by Rabosky and Cox date back more than a century. By tracing changes in color patterns within populations over time, they determined that the rarest color morph in a given population gradually became more common.

Predators of ground snakes include hawks and other raptors, crows and ravens, and blue jays. Ground snakes typically grow to a length of around 8 inches.

“This is what’s called a frequency-dependent system, and it makes it hard to lose any of these morphs once they appear,” Rabosky said. “The rare morphs have an advantage because they are rare, so gradually their numbers will start to increase again, and the end result is a system with a lot of polymorphism.” 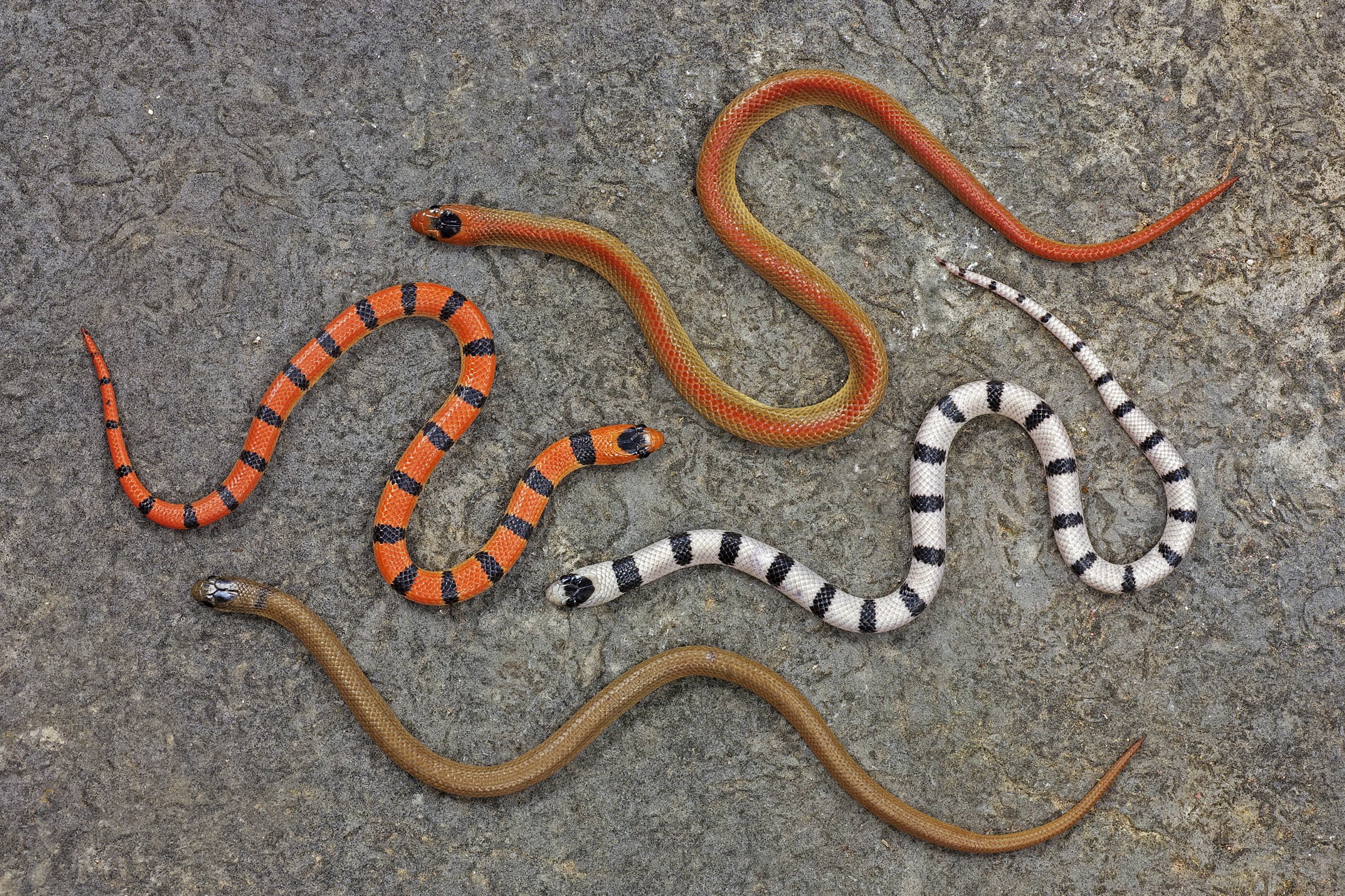 The four color patterns, which are called morphs, found in the ground snake: plain brown, red stripe down the back, black-banded on a light gray background, and the red-and-black-banded “mimic morph,” which resembles the venomous coral snake. Image credit: Alison Davis RaboskySpecifically, Rabosky and Cox found that negative frequency-dependent selection, in which each color type is favored only when it is rare, is the primary reason there are multiple color patterns in ground snakes. Their findings were published online June 26 in The American Naturalist.

Rabosky said the study is the first rigorous test, in a snake mimicry system with color polymorphism, of how the frequencies of morphs change over time and how natural selection is operating on the different color patterns.

Rare morphs have an advantage over common morphs, and mimic morphs gain some protection that non-mimics lack. Toss in the fact that some ground snakes live side by side with coral snakes while other populations are hundreds of miles from the nearest coral snake, and you’ve got a complex system where untangling the details of color polymorphism is a formidable challenge. 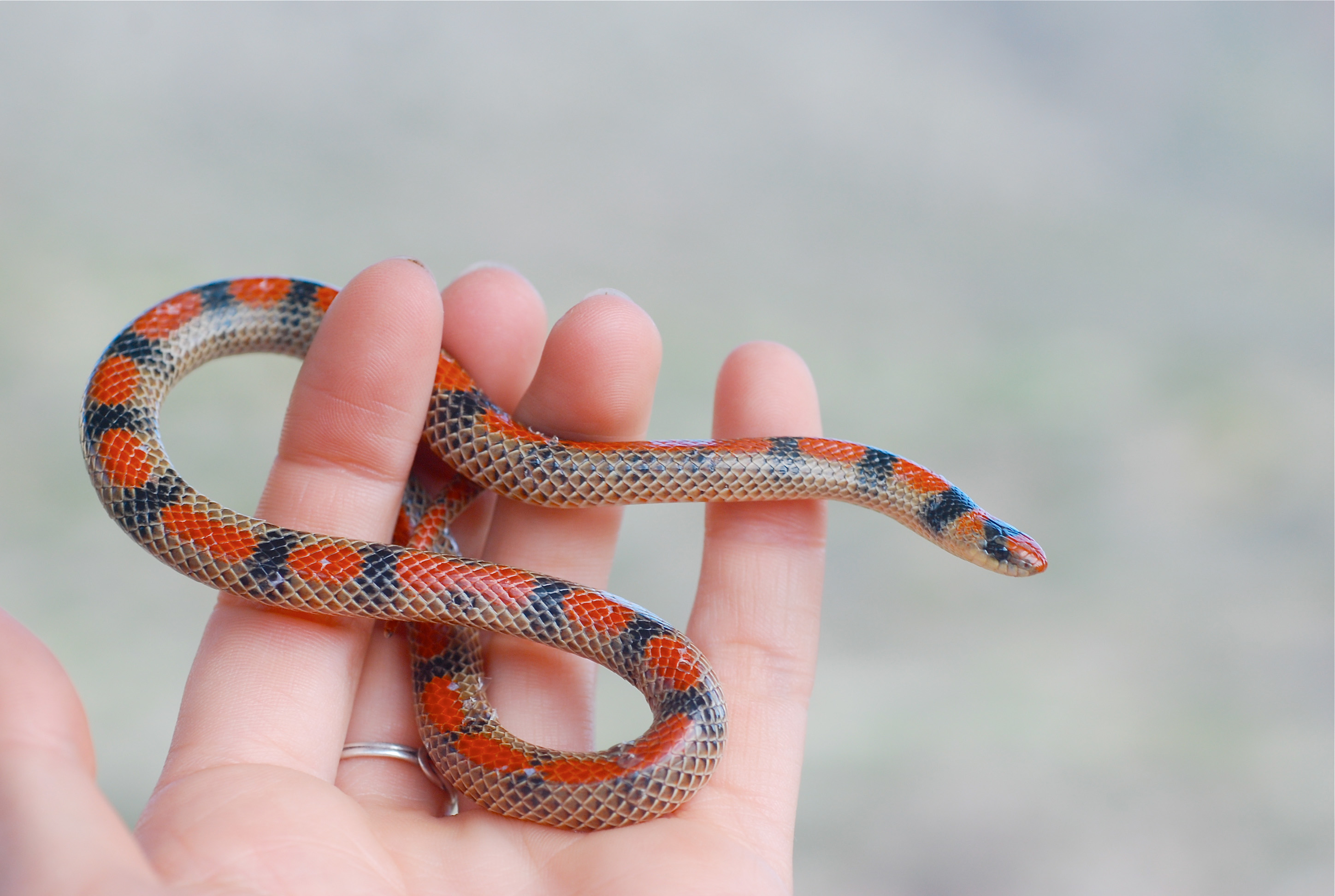 An adult ground snake from Cochise County, Arizona. Adult ground snakes grow to a length of about 8 inches. Image credit: Alison Davis RaboskyWe’re taught in school that mimicry is a very static system. You have a mimic and a model. They look the same, and it doesn’t change over time,” Rabosky said. “Our results encourage a new view of mimicry: that it’s dynamic, constantly in flux and full of polymorphism.”

Coral snakes produce a potent neurotoxin, and bites to humans can be fatal if left untreated. However, coral snake bites are extremely rare in the United States, and patients who receive prompt medical care usually recover.

The ground snake project was funded by the Theodore Roosevelt Memorial Fund from the American Museum of Natural History, a Systematics Research Fund Award from The Linnean Society and a National Science Foundation Postdoctoral Fellowship in Biology.