Mindful breathing for pain control: Like yin and yang

To that end, researchers at the University of Michigan compared two types of meditative breathing–traditional mindful breathing and virtual reality, 3D-guided mindful breathing–to reduce pain. They found that each lessened pain by modulating the somatosensory cortex, a region of the brain responsible for processing pain, but each used different mechanisms, said Alexandre DaSilva, associate professor at the School of Dentistry.

With the traditional breathing group, the functional connection with the brain’s frontal regions increased, because this region was focused on the body’s internal sensory details, called interoception, DaSilva said. This competed with the external pain signals and inhibited the ability of the somatosensory cortex to process pain. This follows the common assumption that mindful breathing exerts its painkilling effect by interoception, which means the conscious refocusing of the mind’s attention to the physical sensation of an internal organ function.

In the virtual reality group, subjects wore special glasses and watched a pair of virtual reality 3D lungs, while breathing mindfully. The technology was developed in-house and the lungs synchronized with the subjects’ breathing cycles in real time. This provided an immersive visual and audio external stimulus. Pain decreased when the sensory regions of the brain (visual, auditory) engaged with the immersive virtual reality sound and image stimulations. This is called exteroception, and it weakened the pain processing function of the somatosensory cortex. 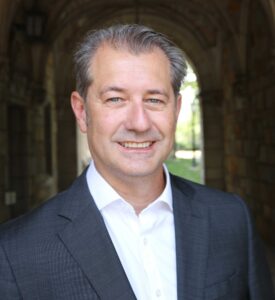 “(I was surprised) that both meditative breathing methods decreased pain sensitivity, but oppositely in the brain, like yin and yang,” DaSilva said. “One by engaging the brain in an immersive exterior 3D experience of our own breathing, or exteroception–yang, and the other by focusing on our interior world, interoception–yin.”

Though both approaches decreased pain sensitivity, traditional mindful breathing can be challenging because it requires long-time attention and focus on an abstract experience, he said. Virtual reality breathing might be more accessible, especially for beginners, because it lends an immersive “visual and auditory guide” to the meditation experience.

And, the virtual reality mindful breathing gives medical professionals another possible option for pain relief, to decrease the tendency to rely solely on pain medications, including opiates, DaSilva said.

Pain is processed by many regions in the brain that provide different information for the global pain experience. DaSilva’s lab learned in previous studies that some of those regions can be externally targeted by neuromodulation, a process whereby electrical impulses are used to directly modulate brain activity.

However, here was to dissect and understand the two brain mechanisms for pain modulation using breathing. To that end, DaSilva’s team compared the two methods of breathing, by placing a single, unilateral thermode on the left mandibular nerve branch of the trigeminal cranial nerve for each participant–think of a tiny, computer-controlled hotplate on your face. 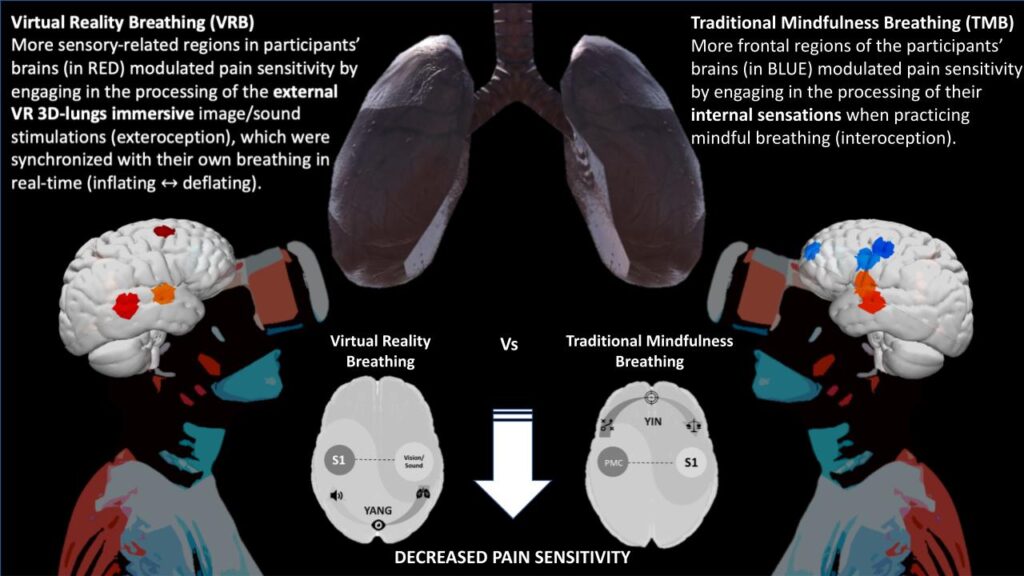 To study the brain mechanisms used during the two types of breathing, researchers analyzed their associated functional connectivity–i.e., what regions of the brain were co-activated and when–during each type of breathing and pain stimulation. They investigated the acute (same session) and long effects (after one week) of breathing techniques, and in the week between the two neuroimaging sessions, both groups did traditional mindful breathing at home.

DaSilva’s research group, which focuses heavily on migraine and pain, is working on options to deliver this virtual reality breathing experience via a mobile application and extending its clinical benefit to multiple chronic pain disorders beyond the lab space.