Mirror-like photovoltaics get more electricity out of heat

New heat-harnessing “solar” cells that reflect 99% of the energy they can’t convert to electricity could help bring down the price of storing renewable energy as heat, as well as harvesting waste heat from exhaust pipes and chimneys.

The energy storage application, known informally as a “sun in a box,” stores extra wind and solar power generation in a heat bank.

“This approach to grid-scale energy storage is receiving widespread interest because it is estimated to be ten-fold cheaper than using batteries,” said Andrej Lenert, an assistant professor of chemical engineering.

The “sun” itself in this approach is already low cost: a tank of molten silicon, for instance. The relatively expensive parts are the photovoltaic panels that turn the stored heat back into electricity. 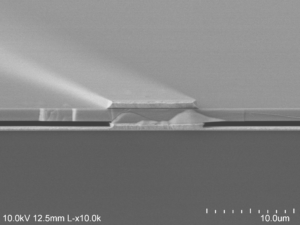 The electron microscope image shows the air (darkest gray) sandwiched between the gold backing at the bottom and the semiconductor at the top, supported on gold beams. Image credit: Dejiu Fan, U-M Optoelectronic Components and Materials Group

Compared to ordinary solar panels that turn light, rather than heat, into electricity, thermal photovoltaics need to be able to accept lower energy photons—packets of light or heat—because the heat source is at lower temperature than the sun. To maximize efficiency, engineers have been looking to reflect the photons that are too low-energy back into the heat bank. That way, the energy gets reabsorbed and has another chance to get packaged into an electricity-producing, higher-energy photon.

The energy emitted by the heat bank has over 100 chances to be absorbed by the solar cell before it gets lost.
Steve Forrest

The conventional gold-backed thermophotovoltaic reflects 95% of light that it can’t absorb—not bad, but if 5% of the light is lost with each bounce, that light has on average 20 chances to be re-emitted in a photon with enough energy to be turned into electricity. 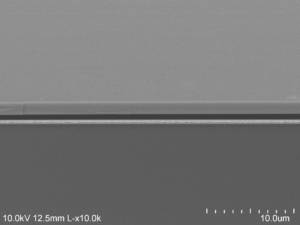 The electron microscope image shows the air (darkest gray) sandwiched between the gold backing at the bottom and the semiconductor at the top. Image credit: Dejiu Fan, U-M Optoelectronic Components and Materials Group

Increasing the number of opportunities means one could potentially use cheaper solar cell materials that are choosier about what photon energies they’ll accept. This has additional benefits: higher energy photons make higher energy electrons, which means higher voltages and less energy lost while getting the electricity out.

In order to improve the reflectivity, the team added a layer of air between the semiconductor—the material that converts the photons into electricity—and the gold backing. The gold is a better reflector if the light hits it after traveling in air, rather than coming straight from the semiconductor. To minimize the degree to which the light waves cancel each other out, the thickness of the air layer must be similar to the wavelengths of the photons.

Initially, electrical engineering and computer science doctoral student Dejiu Fan balked at the job of making such a cell. Fan explained that the thickness of the air layer had to be very precise—within a few nanometers—to reflect the lower energy photons. What’s more, the fragile semiconductor film is only 1.5 micrometers (.0015 millimeters) thick, yet it needed to span over 70 micrometers of air between the 8-micrometer-wide gold beams.

“It was not clear at the beginning if this ‘air bridge’ structure, with such a long span and without any mechanical support in the middle, could be built with high precision and survive multiple harsh fabrication processes,” Fan said. 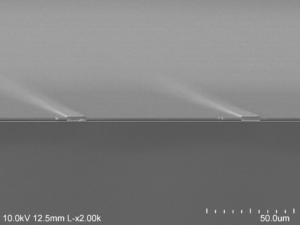 The electron microscope image shows the air (darkest gray) sandwiched between the gold backing at the bottom and the semiconductor at the top, supported on gold beams. Image credit: Dejiu Fan, Optoelectronic Components and Materials Group, University of Michigan

But he did it—and remarkably quickly, Forrest said. Fan, working with Tobias Burger, a doctoral student in chemical engineering, and other collaborators, laid the gold beams onto the semiconductor. Then, they coated a silicon back plate with gold to make the mirror and cold-welded the gold beams to the gold backing. This way, the thickness of the gold beams could accurately control the height of the air-bridge, enabling the near-perfect mirroring.

Lenert is already looking ahead to raising the efficiency further, adding extra “nines” to the percentage of photons reflected. For instance, raising the reflectivity to 99.9% would give heat 1,000 chances to turn into electricity.

The study is titled “Near-perfect photon utilization in an air-bridge thermophotovoltaic cell.” U-M has applied for patent protection and is seeking commercial partners to bring the technology to market.

The research was funded by the Army Research Office and the National Science Foundation. Forrest is also a professor of electrical engineering and computer science, material science and engineering, and physics. The device was built in the Lurie Nanofabrication Facility.