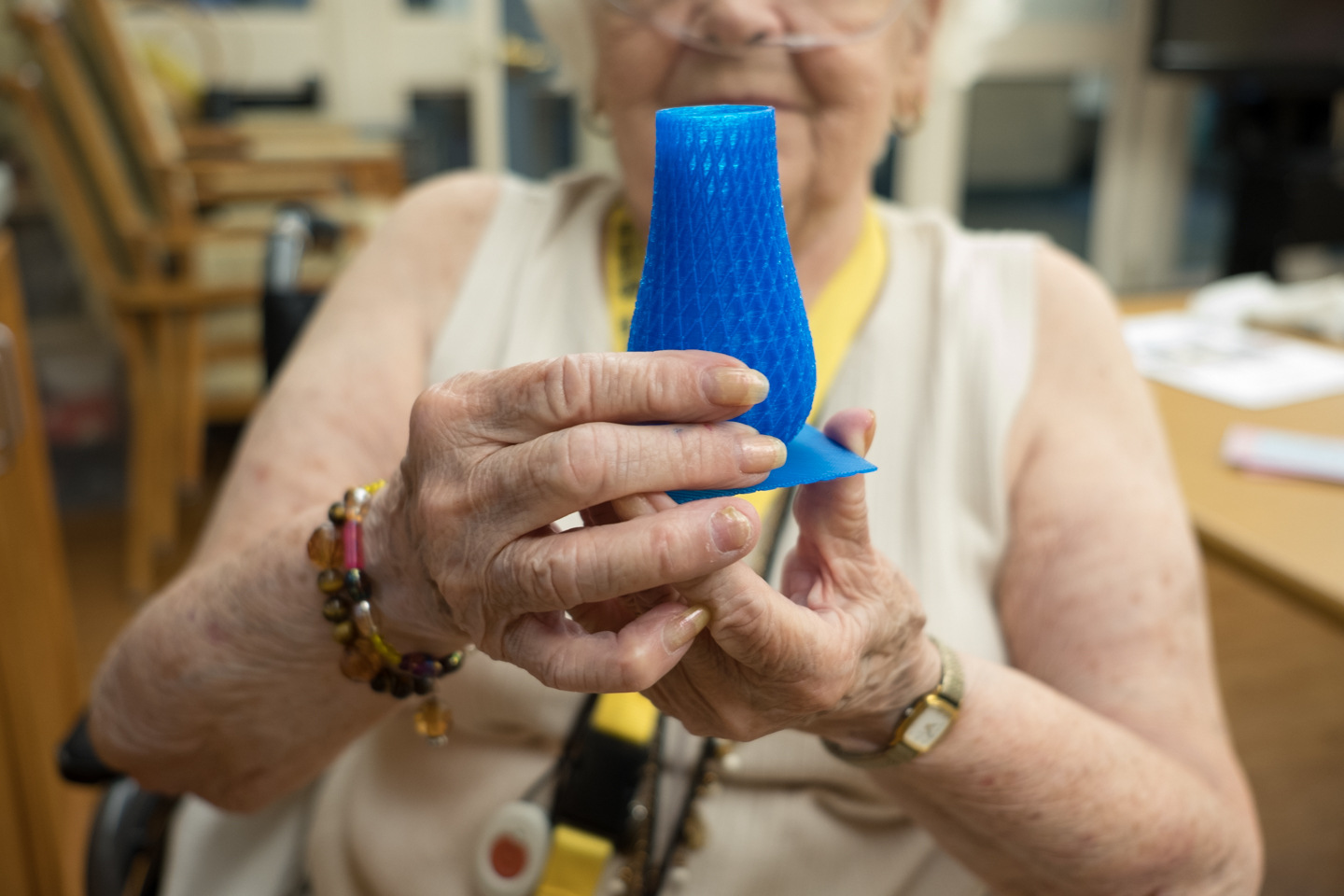 ANN ARBOR—Frustrated that her sweater got lost in the community laundry, 92-year-old Gigi took advantage of an embroidery machine to label two others.

Jewelry lover Betty had been reluctant to wear her fine necklaces, fearful they would get tangled in the tubes of her oxygen mask, so the 96-year-old found a pattern and 3D-printed a heart-shaped pendant.

Esther announced one day that she wanted to make a blue vase to add a splash of color to her room. The 84-year-old’s first attempt failed but she still proudly displayed the colorful bowl that resulted.

All three women were participants in an experimental makerspace at a long-term care facility in New Jersey. Researchers from the University of Michigan School of Information set up and ran the space, logging 280 hours of observations and semi-structured interviews with participating residents.

Honestly, I think makerspaces have the potential to jumpstart long-term care facility residents’ brains—to get them thinking and learning new things again, whether or not they participate by making something. 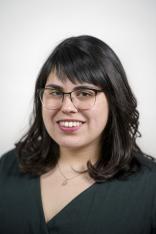 “Honestly, I think makerspaces have the potential to jumpstart long-term care facility residents’ brains—to get them thinking and learning new things again, whether or not they participate by making something,” said U-M School of Information graduate student Kayla Carucci, lead author of a study presented at the recent Conference on Human Factors in Computing Systems, the international conference of Human-Computer Interaction.

“It is very important that older adults keep their minds sharp, but that can be hard when you aren’t being challenged or given the opportunity to explore your own interests.”

Organized activities for residents are common in such facilities but makerspaces—defined as ‘open workshops with different tools and equipment where people can go independently to make something’—typically have been found in public libraries and schools, targeted at much younger participants. They feature computers and machines—large ones like lathes, laser cutters and 3D printers—in a culture largely dominated by men.

“Our work dispels the notion that residents of long-term care facilities—even some over 95 years of age—are constrained by their physical or cognitive limits, as some activities specifically designed for older adults assume,” said Kentaro Toyama, senior author and the W K Kellogg Professor of Community Information. “Aging comes with some loss in capability, but not necessarily in curiosity, motivation or interest in new things.”

Carucci spent a lot of time in a long-term care facility in which her mother worked, so she knew that many of the people admitted to those facilities dreaded losing their independence. The population of Americans over age 65 is expected to double over the next three decades, resulting in a 75% increase in the number of older adults who will need assisted living, nursing homes and skilled nursing facilities. They even have a name for this population—fourth age residents, those who will spend time in long-term care facilities and suffer declines in well-being due to advanced age and the resulting loss of independence. 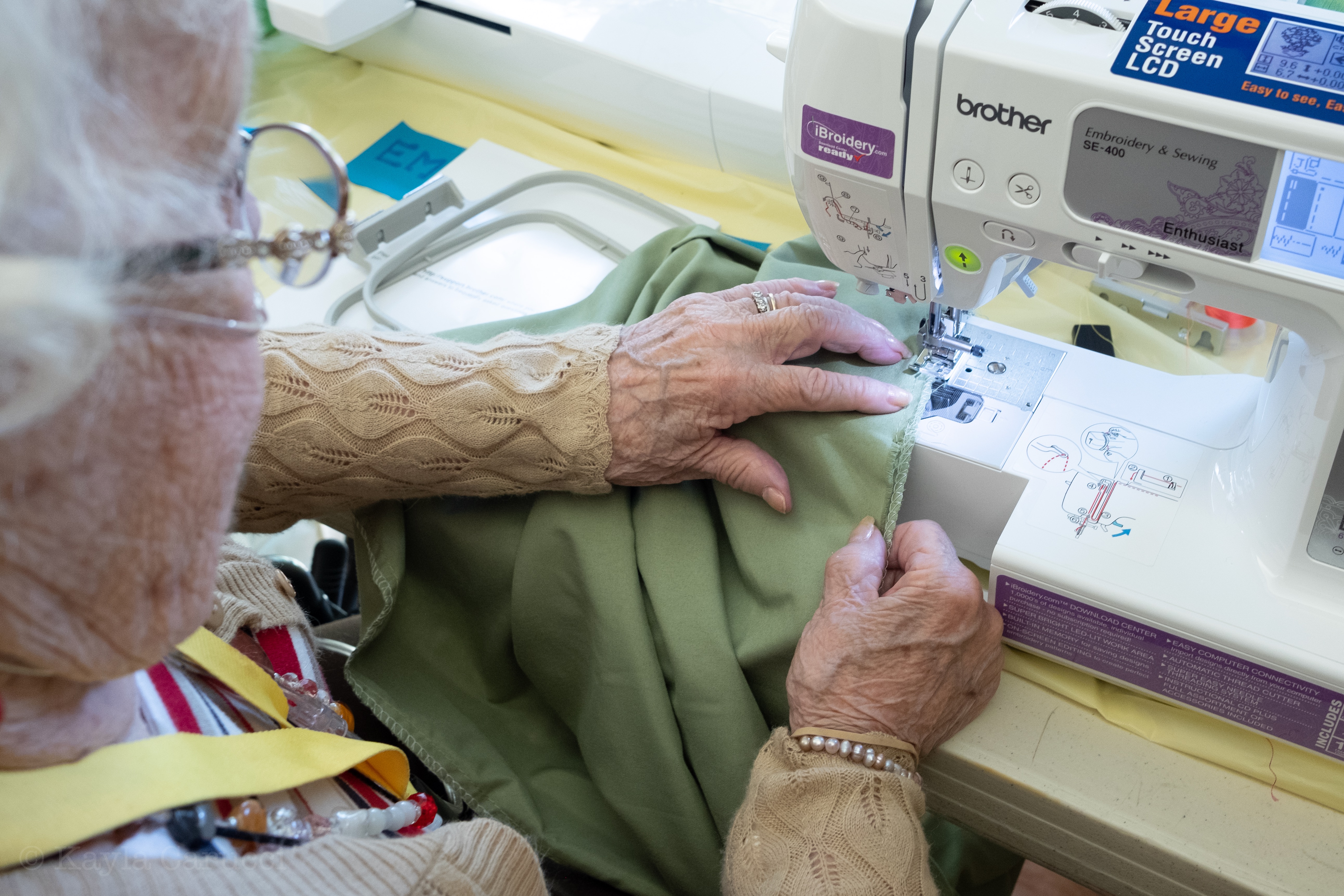 “It occurred to me that the creative arts programming that many of these facilities have was not all that different than work that might be produced in a makerspace. The concept seemed like a fantastic match for the residents of these facilities, who frequently have minimal control of their daily lives,” Carucci said.

“The residents were all intrigued and excited by the space, whether they actually participated or not. I was especially excited that several women over 90 were routine participants, particularly one 98-year-old woman who came to the makerspace 3-4 days a week for about 4-6 hours at a time.”