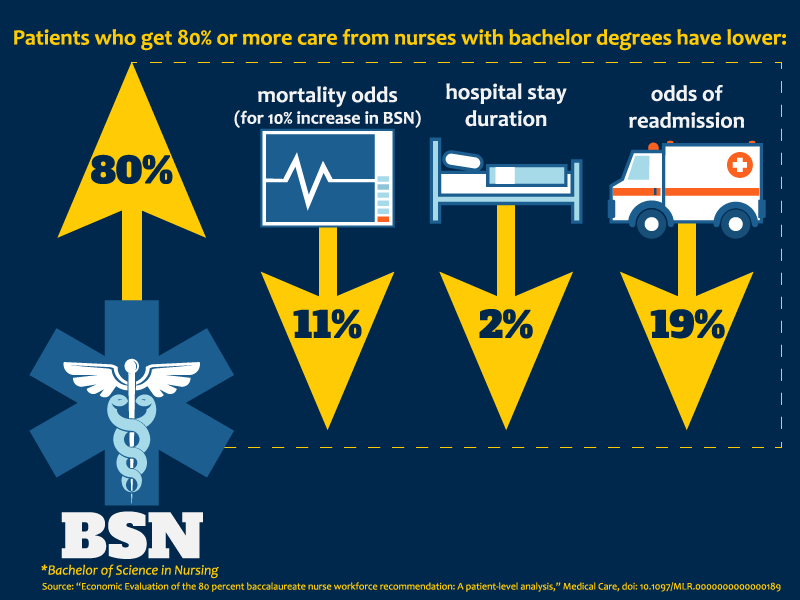 ANN ARBOR—Patients in an eastern academic medical center who received most of their nursing care from nurses with bachelor of science degrees had better care, fewer readmissions and shorter stays, according to a University of Michigan study.

The study only looked at patients in one hospital, said Olga Yakusheva, lead author and U-M associate professor of nursing. It found that when patients received 10 percent more of their care from BSN-educated nurses, it reduced the odds of mortality for those patients by roughly 11 percent. Hospital stays shortened by about 2 percent and the odds of readmissions dropped by nearly 19 percent.

“The real contribution of this study is that when we looked at patients in the same hospital, who were hospitalized on the same unit with the same diagnosis, patients who received more than 80 percent of nursing care from BSN-educated nurses tended to do better—despite often being sicker at the time of admission,” said Yakusheva, who conducted the research while at Marquette University with co-authors Richard Lindrooth of the University of Colorado and Marquette’s Marianne Weiss.

The researchers conducted an economic evaluation of a 2010 Institute of Medicine recommendation that called for increasing the proportion of BSN-educated nurses to 80 percent by 2020. The current national average is 55 percent, and the average of BSN-educated nurses at the hospital whose patients were included in the study was roughly 57 percent.

The study estimated that fewer readmissions and shorter stays could save roughly $5.6 million annually—depending on how many readmissions are reimbursed—more than enough money to recoup the upfront hiring or training costs of adding BSNs, Yakusheva said.

“This makes you think, how can we give all of our patients an equal opportunity to receive the high-quality care they deserve?” Yakusheva said. “The answer is, or at least seems to be, investing in nurse education. Our study shows that these investments can also have real cost-saving effects in the long term.”

The study included more than 8,500 adult medical-surgical patients matched with nearly 1,500 direct-care nurses in an academic medical center over seven months. The improved patient outcomes depend on a combined approach of increasing the hospital-level BSN proportion to 80 percent and adjusting staffing to ensure that all patients receive a higher proportion of BSN care.
“Economic Evaluation of the 80 percent baccalaureate nurse workforce recommendation: A patient-level analysis” appears in the journal Medical Care.