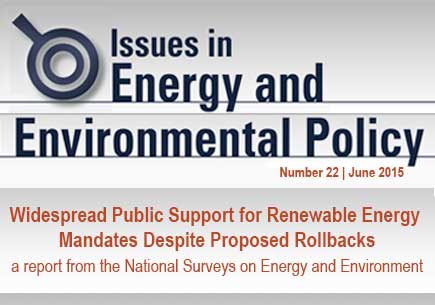 ANN ARBOR—Despite recent attempts in many state legislatures to repeal or weaken renewable energy requirements, a University of Michigan poll finds that a majority of Americans—of every race, income and education level, and religious and political affiliation—support such mandates.

A majority of Americans surveyed as part of the National Surveys on Energy and Environment said they’d be willing to spend an extra $25 per year for more renewable energy—a number which exceeds the average $15 per year cost premium of current programs. However, once the cost rises to $50 per family per year, that support dwindles.

“Though there is wide support for the idea of renewable energy requirements, few Americans know whether or not their state currently has them in place,” said Barry Rabe, U-M professor of public policy and director of the Center for Local, State, and Urban Policy.

The survey is a joint effort of the Center for Local, State, and Urban Policy at U-M’s Gerald R. Ford School of Public Policy and the Muhlenberg Institute of Public Opinion at Muhlenberg College in Allentown, Pa.

Renewable portfolio standards are active in 28 states from Washington to Maine. In the last two years, there have been proposals to weaken or repeal these standards in many states. Just last week, Kansas downgraded its standard to a voluntary target, and repeal bills are making their way through the state legislatures in North Carolina and Texas.

In addition, renewable energy requirements are set to expire this year in seven more states including Michigan and New York. None of these states have succeeded in renewing or expanding these requirements.

Opponents of renewable energy statutes often argue that these policies needlessly increase the cost of electricity. The survey found public support was closely linked to the price premium of a state’s standards, and so it is reasonable to assume that public support for such mandates might wane if the costs increase, Rabe said.

“However, given that very few Americans are knowledgeable about their state’s renewable energy policies, it is unlikely that current efforts to roll back these statutes are the result of a groundswell of public dissatisfaction or concern over the current costs of renewable energy requirements,” said Christopher Borick, a political science professor and director of the Muhlenberg College Institute of Public Opinion.

The random telephone survey of 751 American adults was conducted in April 2015. The survey had a margin of error of 3.6 percent.