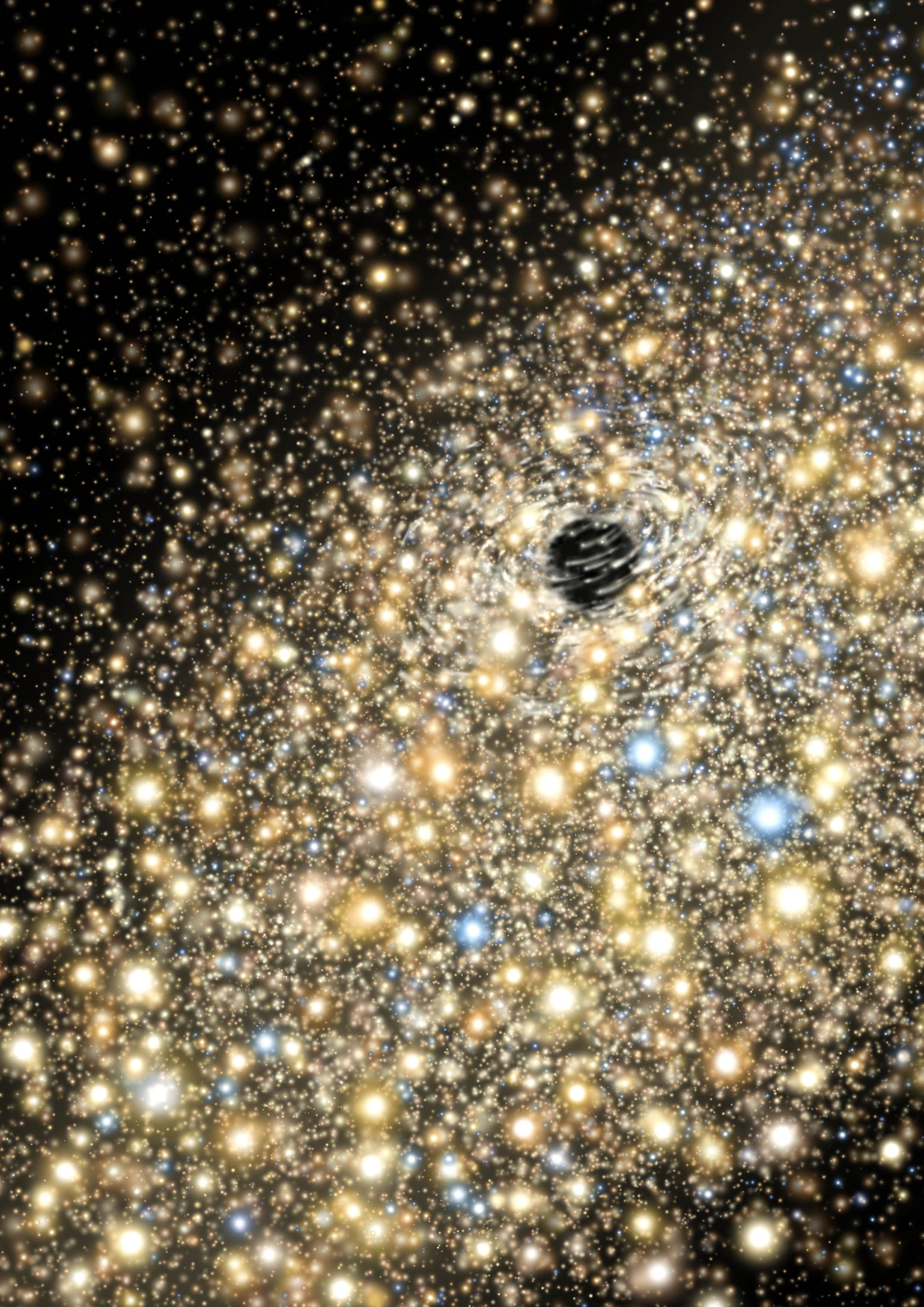 Artist’s conceptualization of the stellar environment around a black hole of about 10 billion solar masses. The velocity of stars in orbit (and close to) the black hole help to determine its mass. Gemini Observatory/AURA illustration by Lynette Cook.ANN ARBOR—At 10 billion times the mass of our sun, two newly discovered black holes are the most massive that astronomers have ever found.

A paper on the discovery, which involved a University of Michigan researcher, is published in the Dec. 8 edition of Nature.

Black holes are dense concentrations of matter that produce such strong gravitational fields that not even light can escape. These new ones are at the centers of two elliptical galaxies more than 300 million light years from Earth.

They may be the fossil remains of quasars that populated the early universe. Quasars, the brightest objects in the universe, are active galaxy cores. They are the glowing gas and dust just beyond the reach of a central supermassive black hole. Quasars go dim when their fuel runs out. They leave behind black holes.

“The most luminous quasars seem to require a black hole of 10 billion solar masses to provide the amount of energy being radiated. For a long time, we weren’t finding any black holes that large. Now it turns out that they are there, and the theory fits together with the observations,” said Douglas Richstone, the Lawrence H. Aller Collegiate Professor of Astronomy at U-M.

Approximately 63 supermassive black holes have been found at the cores of nearby galaxies. The largest for over three decades was a 6.3-billion solar mass black hole in the center of the nearby galaxy M87.

“These black holes may shed light on how black holes and their surrounding galaxies have nurtured each other since the early universe,” said Nicholas McConnell a graduate student at the University of California, Berkeley, who is first author of the paper.

“We can see the microwave background radiation in the universe, left over from the Big Bang. It’s very smooth. There are ripples in it, but they’re low-amplitude. Everything we know and love in the universe—stars, planets, black holes, people—grows out of these small perturbations,” Richstone said. “Understanding that process is a big part of the agenda of modern astronomy. And understanding how supermassive black holes form and correlate with their host galaxy and how those galaxies form is an early part of that story.”

The research is funded by the National Science Foundation, NASA, and UC Berkeley’s Miller Institute for Basic Research in Science.