ANN ARBOR—Can a car really get 3,300 miles to the gallon? The University of Michigan’s Supermileage Team is on its way to proving it can—with a lawnmower engine.

“We are taking something that is in your backyard and turning it into something that’s sleek, modern and high-performance,” said mechanical engineering senior Laura Pillari, project manager and co-founder of the team.

The new student team will compete in its first competition this summer, the SAE International Supermileage Challenge, in Marshall, Mich. The competition challenges student teams to design and construct a single-person, fuel-efficient vehicle with a small four-stroke engine.

The team’s goal this year is to beat the North American record of 3,169 miles per gallon, and to better it by reaching 3,300 mpg.

“Fuel efficiency is one of those issues prevalent in society today,” said chief engineer and co-founder Brett Merkel, a senior in mechanical engineering. “The technology we’re coming up with can have far-reaching effects, and be implemented in just a few years.”

In fact, that process has already begun. The fuel injection system, designed by mechanical engineering student and team member Lihang Nong for the team’s vehicle, is now the focus of a start-up called PicoSpray. The company won the $20,000 second prize in the Michigan Clean Energy Venture Challenge earlier this year, and it was selected to spend the next term as a tenant in the U-M student business incubator TechArb.

According to Merkel, the fuel injection system can drop the price of an engine for single-person vehicles such as motorcycles and mopeds by 70 percent, and create 50 times fewer emissions than the current engines used.

“Since those single-person vehicles are the primary mode of transportation in many third-world countries, it could have a resounding impact on emissions,” said Merkel.

You won’t see a car on the street that is getting 3,300 miles to the gallon anytime soon, the students say, but the technology is heading in that direction. 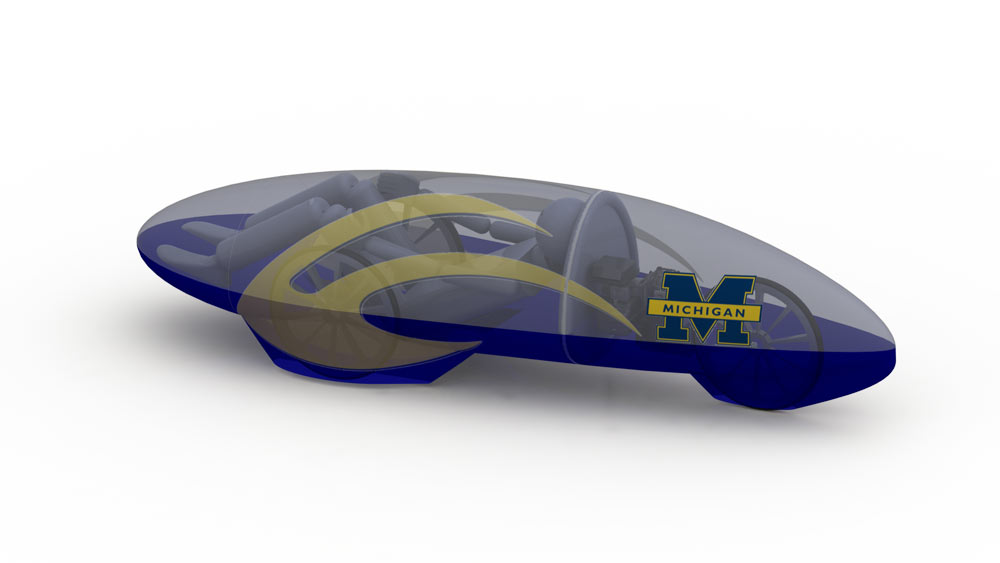 A concept drawing of the U-M Supermileage team’s vehicle. Courtesy of the U-M Supermileage teamThe team used a requirements-based design approach to the vehicle construction, which Merkel said is unique to teams in the Wilson Center. The project was broken down into the individual requirements of the vehicle—chassis, engine and body—and assigned to different groups within the team.

Requirements-based design is a technique that’s been used in the industry for quite some time, according to the team’s faculty adviser and professor of engineering practice Harvey Bell, but most students don’t get exposed to the idea until later in their education.

“I think these competition teams are one of the more significant parts of these students’ engineering education for that reason,” said Bell, who is also co-director of the Multidisciplinary Design Program and worked in the auto industry for 39 years. “The role that engineers serve in society is to create products and services that are beneficial to society. And the operative word there is create. One of the challenges of an educational institution is to give students a chance to be creative, and these student teams do that.” 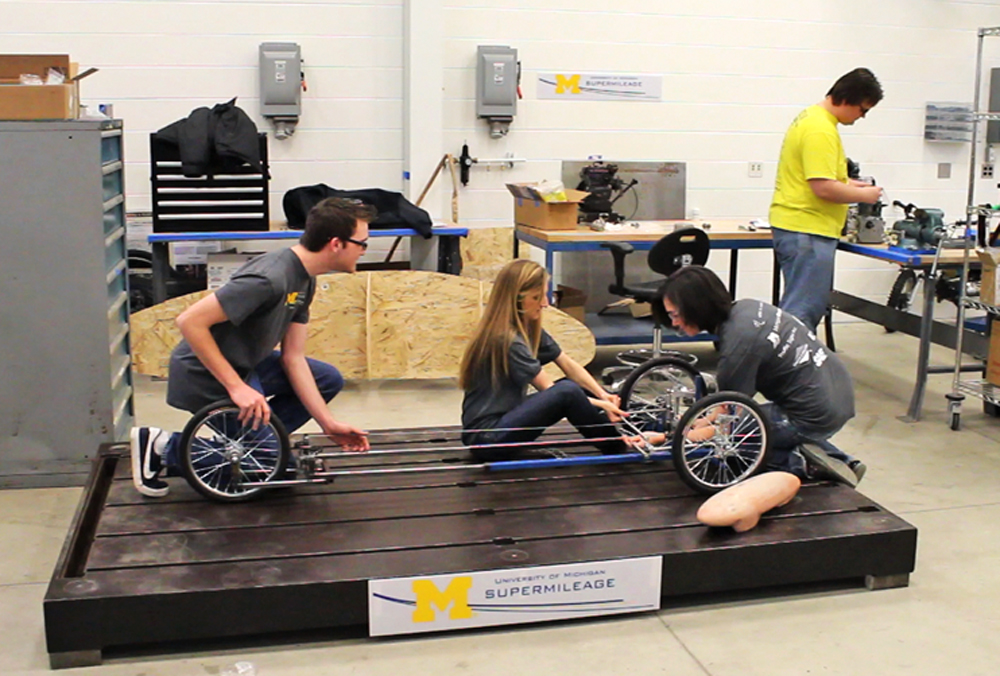 Members of the 2012 University of Michigan Supermileage Team work on their steering linkage in their workshop at the Wilson Center. Image credit: Evan DoughertyBody team leader Karan Jain, a junior in mechanical engineering, remembers why he got started with the team. “I was just sitting on my grades alone and wanted to do something more,” Jain said. “I wanted to have something that I’d accomplished while I was in college, not just sit in a classroom. This is tangible. It’s right here. I can say ‘I did that’.”

Merkel, who founded the team with Pillari after attending the 2010 competition as an intern at Eaton Corporation, said the goal was not only to compete in the 2012 challenge, but also to make the team sustainable in the future.

“It’s crucial to have diversity among the team,” said Merkel. “The project management team supports the engineering team. It gives us legs to stand on. If we just went out and built the car this year and didn’t think about the longevity and business of it, we’d be starting from scratch every year.”