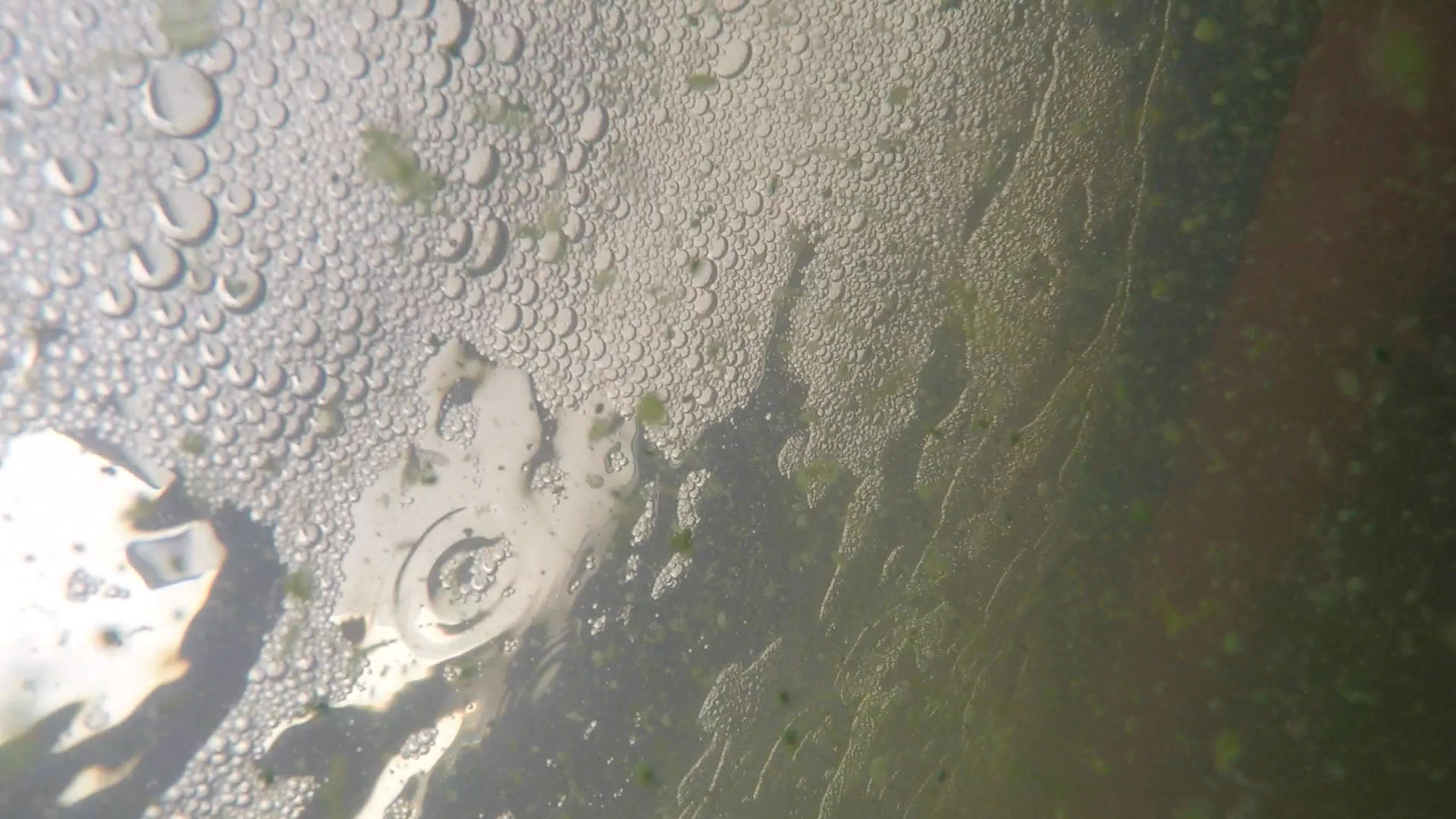 Clumps of bright green cyanobacteria visible in western Lake Erie during a July 13, 2015, research cruise. Image credit: Mike WoodANN ARBOR—The most detailed genetic study of western Lake Erie’s shifting cyanobacterial communities is yielding new insights into the factors that were at play last August when high levels of a bacterial toxin shut down the drinking water supply to more than 400,000 Toledo-area residents.

The University of Michigan-led study is revealing that as environmental conditions in the lake changed throughout summer 2014, the relative abundance of various cyanobacterial strains shifted in response, altering the bacterial bloom’s toxicity.

“The big question we’re trying to answer here is what environmental factors control the toxicity of these blooms, and it now appears there may be multiple factors involved, including the availability of nitrogen,” said U-M marine microbiologist and oceanographer Gregory Dick, leader of the multidisciplinary project.

“The cyanobacterial communities in these blooms are changing through time, and we’re able to track those changes at a level of detail that has not previously been possible.”

In response to last summer’s Toledo event, leaders from Michigan, Ohio and Ontario recently agreed to reduce levels of phosphorus in the western Lake Erie basin 40 percent by 2025. Phosphorus and nitrogen are nutrients used to fertilize crops in places like the heavily agricultural Maumee River watershed, which empties into western Lake Erie.

A forecast issued this month by the National Oceanic and Atmospheric Administration and its partners calls for a severe bloom this summer in western Lake Erie, due in part to heavy June rains that washed fertilizers off crop fields and into the Maumee. 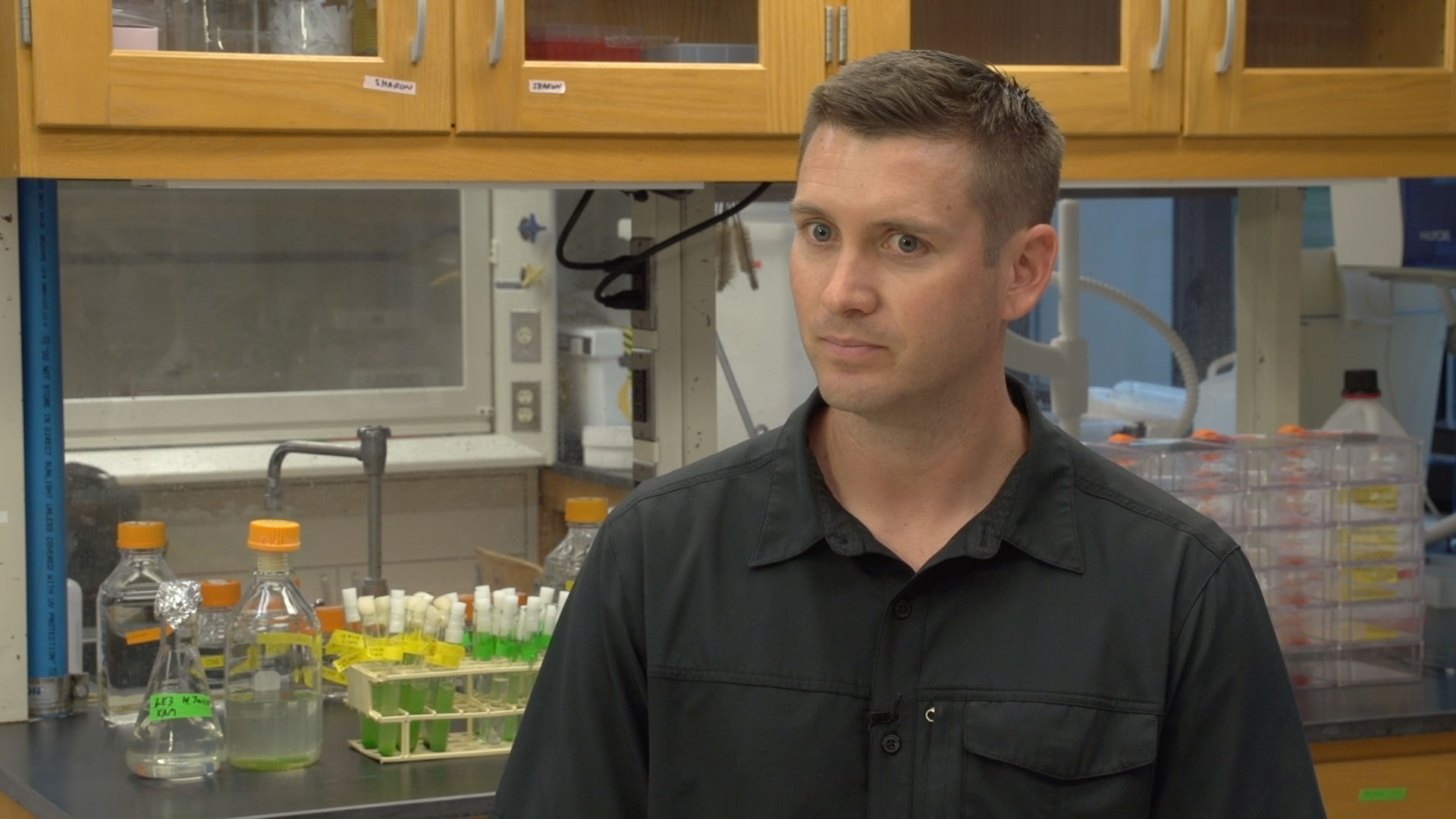 U-M marine microbiologist and oceanographer Greg Dick, leader of a multidisciplinary team investigating the toxicity of Lake Erie cyanobacterial blooms. Image credit: Mike Wood“A lot of the traditional work on these cyanobacterial blooms focuses on phosphorus as being the main culprit,” Dick said. “But in western Lake Erie we’re seeing an intriguing correlation between nitrogen availability and bloom toxicity that we’ll be following up on.”

Dick’s team was awarded a $250,000 grant from the U-M Water Center for an 18-month project that began May 1, 2014. Water samples are collected weekly in the summer and fall at six western Lake Erie locations.

One of the collection sites is the city of Toledo’s water intake, ground zero for the August 2014 water crisis. Because the researchers collected water samples there before, during and after the shutdown, their laboratory freezers now hold a detailed record of the chemical and microbial conditions that led up to and followed that disruptive event. To unlock the secrets held in those samples, they apply the latest techniques of genomics and environmental chemistry. 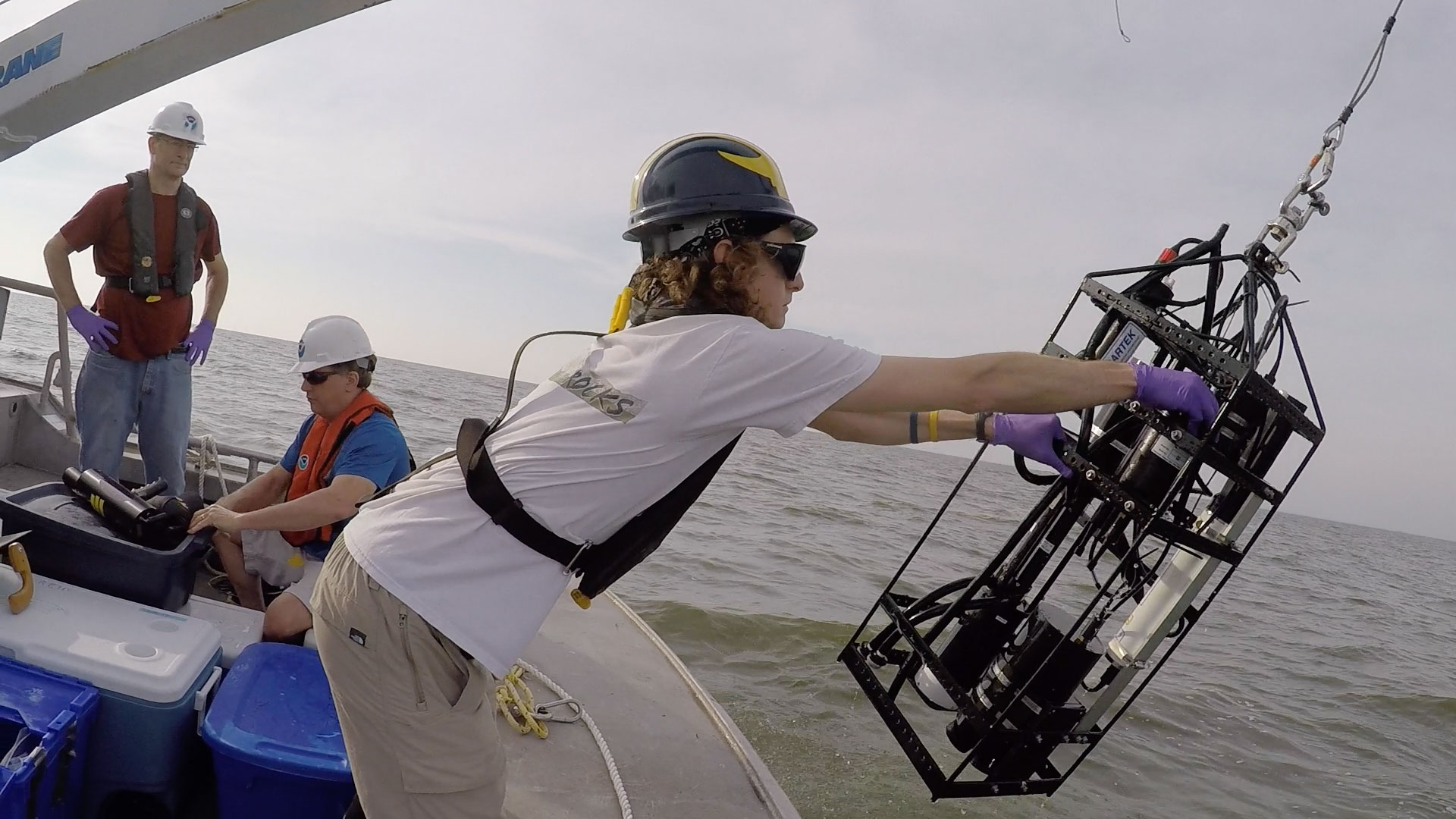 Collecting samples as part of a University of Michigan-NOAA effort to monitor cyanobacteria blooms in western Lake Erie. Image credit: Mike WoodWater collected at the Toledo intake last summer shows a peak in the level of the toxin microcystin during the first week in August, when the city water shutdown occurred. That peak was followed by a rapid drop in toxin levels that persisted for the rest of the summer and into the fall.

As the toxin levels started to drop, the genetic composition of the resident cyanobacteria—which are sometimes called blue-green algae—abruptly shifted, according to Dick.

The Toledo water crisis was blamed on toxins produced by the common cyanobacterial species Microcystis aeruginosa. Genetic sequencing revealed a shift in the abundance of strains of M. aeruginosa in mid-August of last year. Michelle Berry, a technician in the laboratory of U-M microbial ecologist and team member Vincent Denef, is credited with that discovery.

At about the time the bacterial strains shifted, the levels of microcystin toxin in the water and the amount of nitrate, a nitrogen compound, both started dropping.

“It’s like a switch gets flipped in response to environmental changes that include the declining availability of nitrogen,” Dick said.

Fertilizer runoff into western Lake Erie peaks in the spring and early summer, and by mid-summer the cyanobacteria have sucked up most of the available nutrients and used them to fuel their explosive growth.

The researchers suspect that a nontoxic strain of M. aeruginosa became more abundant than a closely related toxic strain last August in response to declining nitrate availability, resulting in a drop in toxin levels in the water.

“That’s what we’re trying to nail down right now,” Dick said. “We see this shift in strains that corresponds to a shift in toxicity, and our working hypothesis is that we’re going from a toxic strain to a non-toxic strain.” 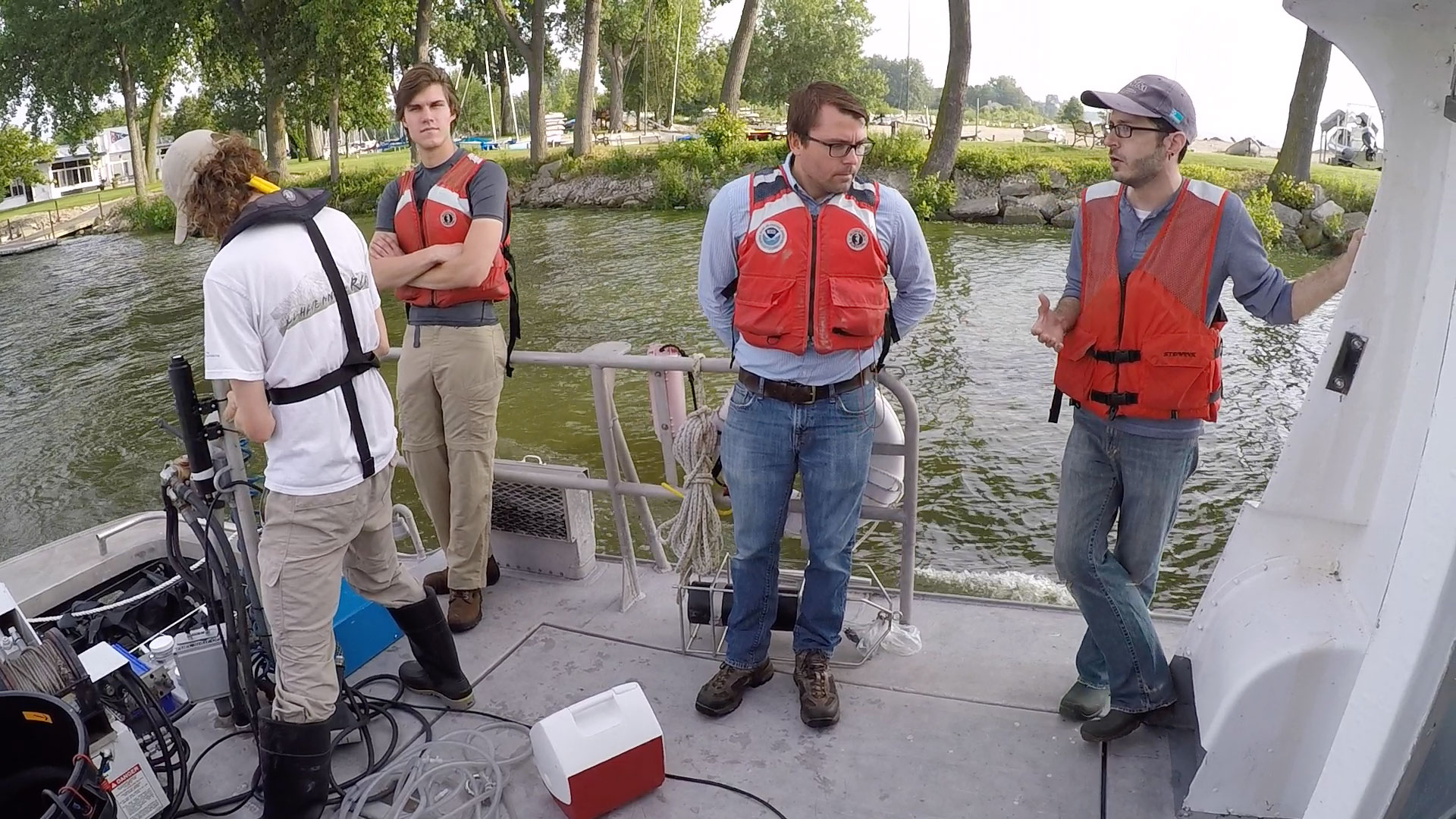 Leaving Toledo Beach Marina at the start of a sample-collecting trip to several sites in western Lake Erie. Image credit: Mike WoodTo test that idea, the researchers are now measuring the activity level of the gene responsible for toxin production in both of the M. aeruginosa strains.

Earlier field experiments in Lake Erie and elsewhere by team member Tim Davis of NOAA strengthened the apparent connection between nitrogen availability and cyanobacterial toxicity. When nitrogen compounds were added to bottles containing a mix of cyanobacterial species, Davis observed an increase in the proportion of toxin-producing strains.

How might this information someday be used to help reduce the toxicity of cyanobacteria blooms in Lake Erie? If the nitrogen link is confirmed by further studies, then the information “could influence the policies used to guide farmers on what types of fertilizers to apply to their lands and how much nitrogen we should be allowing into our waterways,” Dick said.

NOAA’s Davis said: “The better we understand the drivers of bloom toxicity, the more effective the management strategies we can put in place to reduce it.”

High concentrations of the naturally occurring chemical hydrogen peroxide in Lake Erie also may play a role in shaping the toxicity of the annual cyanobacteria bloom. That possibility is being explored by U-M aquatic geochemist Rose Cory, another member of the cross-disciplinary team.

During a recent sample-collecting trip to western Lake Erie, U-M team member Tom Johengen of the Cooperative Institute for Limnology and Ecosystems Research noted that the toxicity study is just one part of a larger collaboration between the university and NOAA. 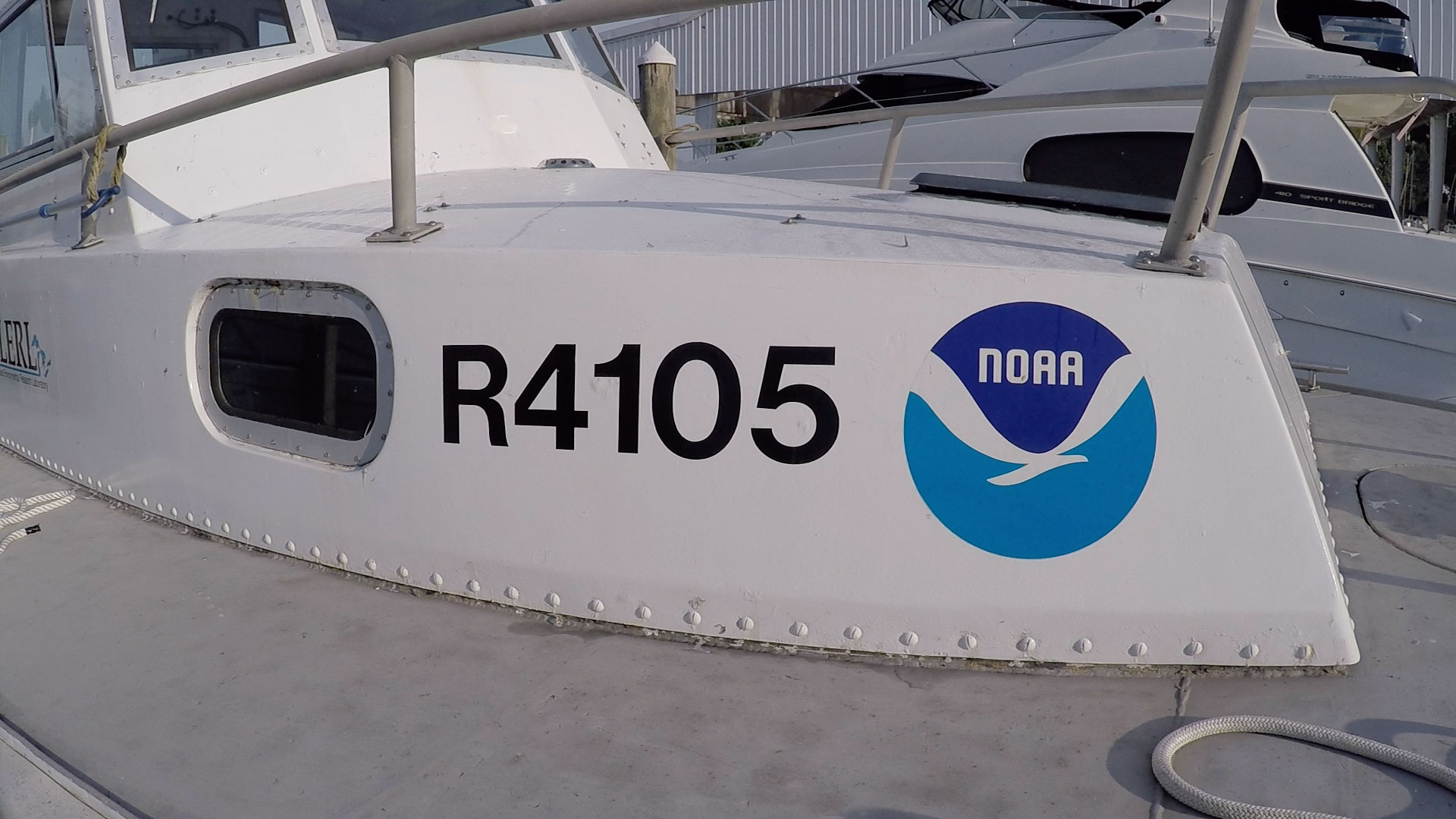 This year, in response to the Toledo incident, several changes to the monitoring program were made, Johengen said. Water samples are now collected at the surface and several feet below it, both particulate and dissolved microcystin toxin are measured, and a network of NOAA monitoring buoys provides real-time information about western Lake Erie conditions, available to the public online.

“During the Toledo incident the conditions changed very rapidly, with water moving into the area where the intake is located and wind mixing the algae that had accumulated at the surface down to depths near the intake,” Johengen said.

“So having continuous monitoring data that can relay information back on hourly or finer time scales is very important to understanding those types of rapidly changing conditions.”

In addition to Cory, the other core team members include David Sherman of the Life Sciences Institute; Gary Fahnenstiel of the Water Center; Melissa Duhaime, George Kling and Tim James of the Department of Ecology and Evolutionary Biology; and Steven Ruberg and Davis of the NOAA lab.

Findings from the study will be submitted for publication in peer-reviewed scientific journals. The U-M Water Center is supported by the Erb Family Foundation and the U-M Office of the Provost.