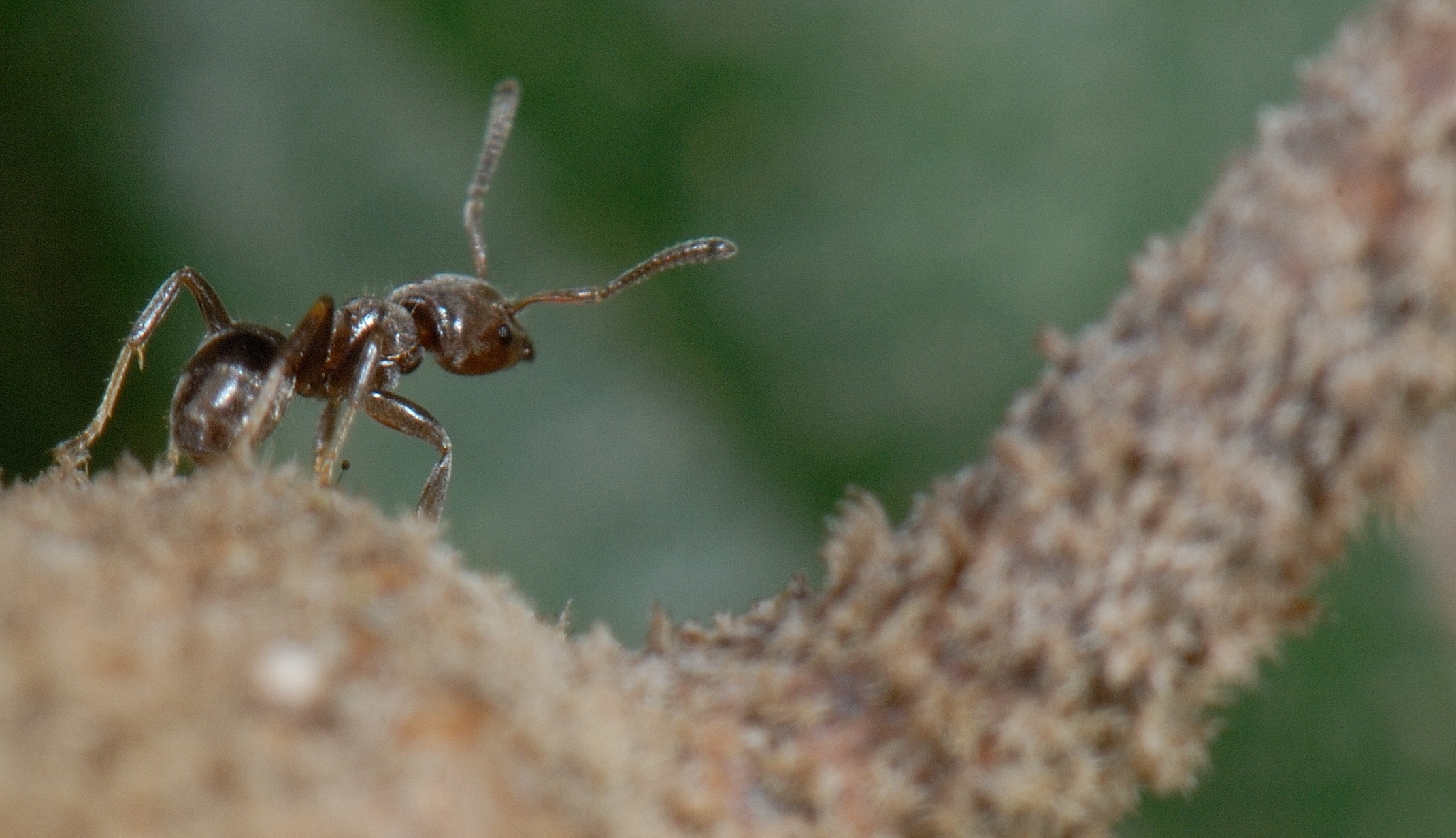 An Azteca ant patrols the surface of an Ecuador laurel tree in Jalisco, Mexico. When a patrolling ant encounters a leaf-eating insect, it bites the insect until it falls from the tree. Image credit: Enrique Ramirez-GarciaANN ARBOR—When water is scarce, Ecuador laurel trees ramp up their investment in a syrupy treat that sends resident ant defenders into overdrive, protecting the trees from defoliation by leaf-munching pests.

The water-stressed tropical forest trees support the production of more honeydew, a sugary excretion imbibed by the Azteca ants that nest in the laurels’ stem cavities. In return, ant colonies boost their numbers and more vigorously defend the life-sustaining foliage.

The mutually beneficial interaction between laurels and ants, which also involves tiny, sap-sucking bugs called scale insects that make the honeydew, is a well-known example of what ecologists call a mutualism. Theoretical studies predict that mutualisms should be stronger under resource-poor conditions, but until now there was little evidence to support that theory. 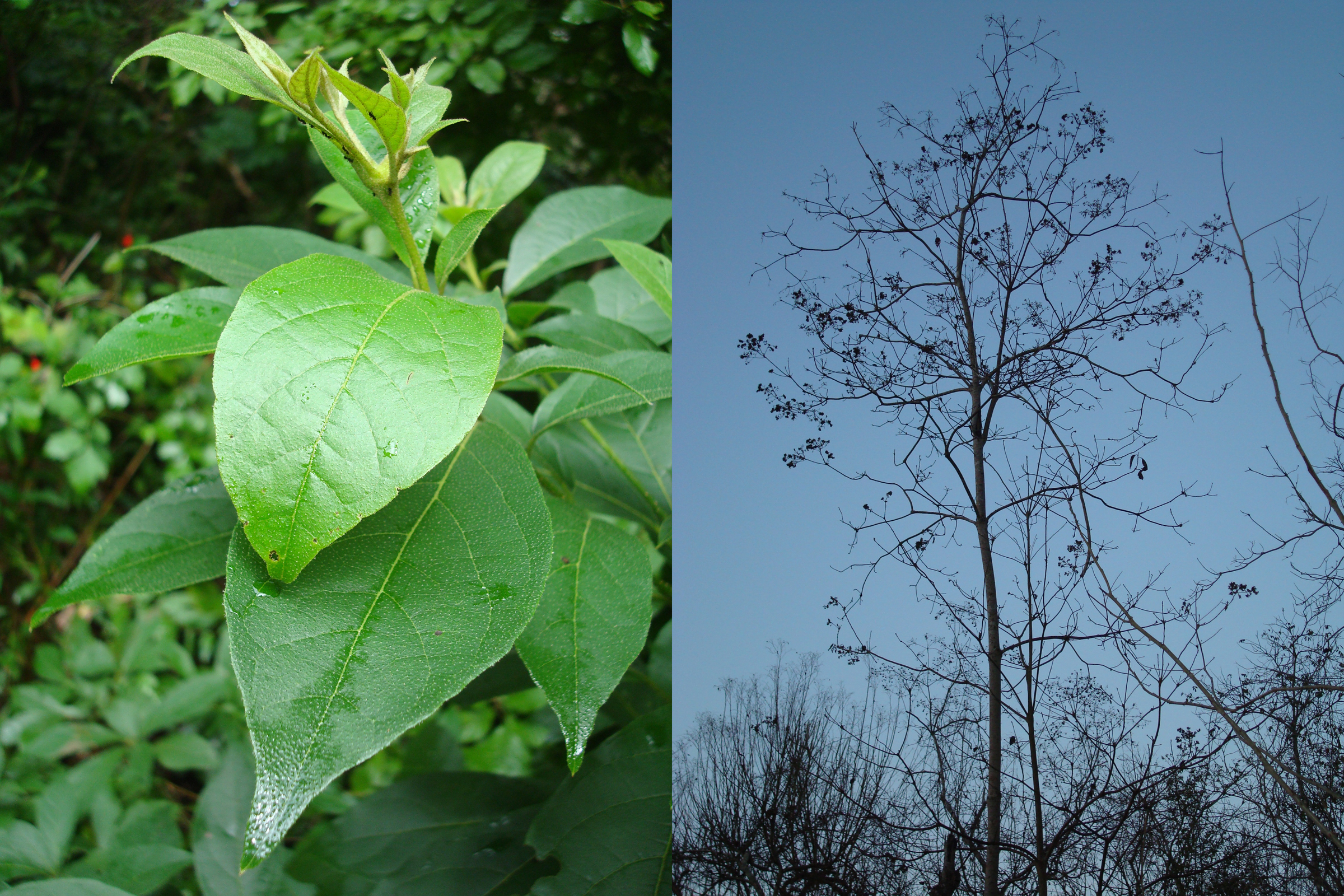 Ecuador laurel trees in the wet season (left) and dry season. Azteca ants are visible on the upper leaves in the photo on the left. The trees grow new leaves each rainy season, and those leaves produce the tree’s carbon-based food. In tropical forests where water is scarce, laurel trees make less carbon and pay ants more to protect their leaves. Image credit: Elizabeth G. PringleIn a paper published online Nov. 5 in the journal PLOS Biology, University of Michigan ecologist Elizabeth Pringle and her colleagues identify a clear-cut case of a stress-strengthened ant-tree mutualism and suggest a possible mechanism underlying it, one based on interspecies carbon exchange. Their results suggest that trees at drier sites buy insurance for their leaves, in the form of beefed-up ant protection, and pay for it with carbon, the coin of the realm.

All plant-animal mutualisms may employ a similar “insurance model,” according to Pringle, a postdoctoral fellow in the Michigan Society of Fellows and an assistant professor in the Department of Ecology and Evolutionary Biology and at the School of Natural Resources and Environment. And the type of water-mediated stress response observed in the study may be more common in the future, if droughts become more severe with climate change, she said.

“We show that trees and their defensive ants invest more in one another in drier, more stressful conditions,” Pringle said. “We saw this happening along the coastline from Mexico to Costa Rica, and then we realized that carbon exchange can explain it.” 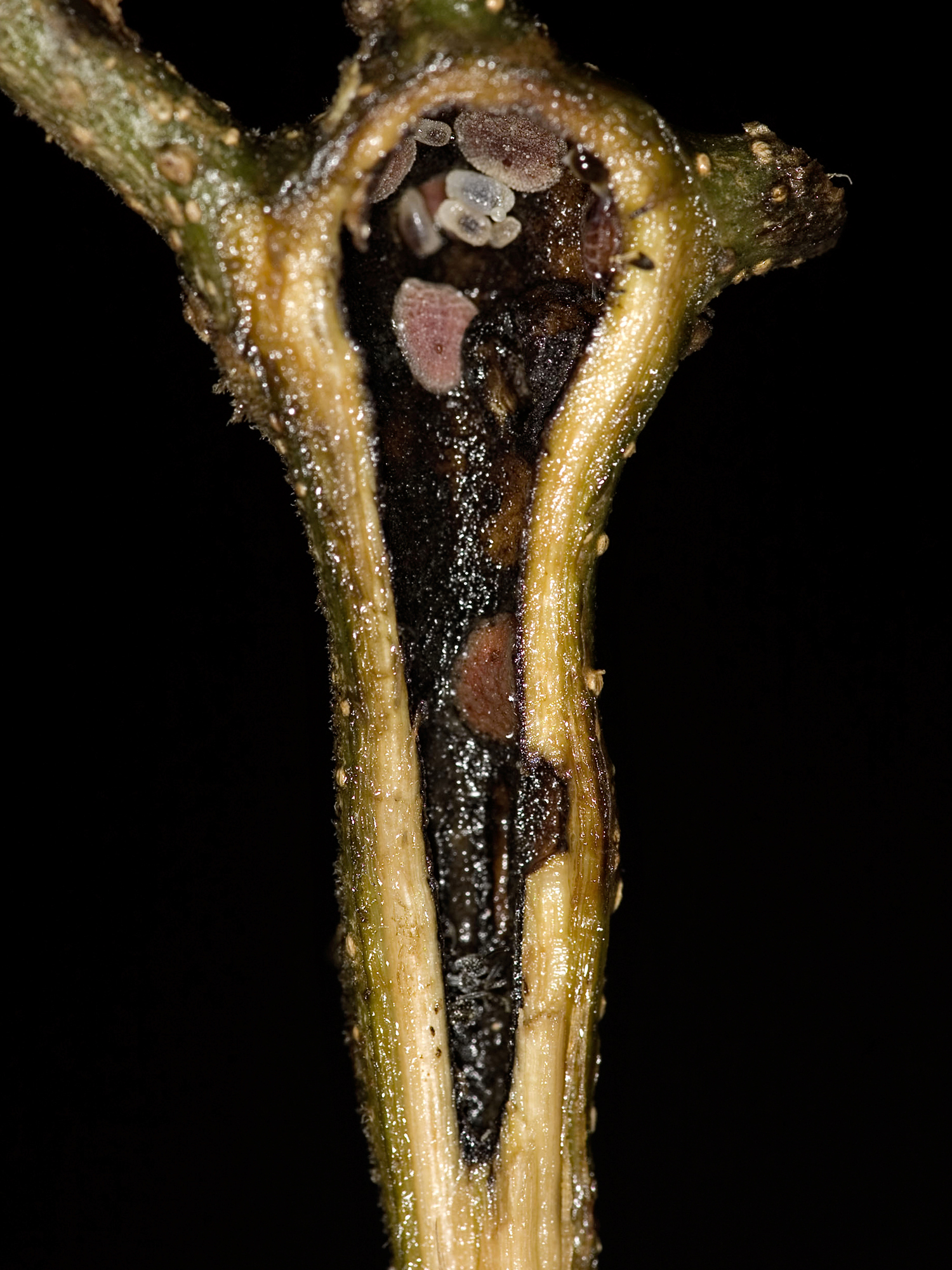 Cross-section of an Ecuador laurel stem cavity, where Azteca ants nest. An adult tree has hundreds of stem cavities, and a single colony of Azteca ants typically occupies all the cavities in a given tree. Pink scale insects feed on sap from the laurel stem and produce sugar for the nesting ants. Adult ants are approximately the same size as their larvae, which are visible in this photo — taken in Costa Rica — as white rods at the top of the cavity. Image credit: Jeffrey C. MillerTo test whether water limitation strengthens the defensive mutualism between Ecuador laurel trees (Cordia alliodora) and Azteca ants (Azteca pittieri), Pringle and her colleagues studied the interaction at 26 sites in seasonally dry tropical forests along the Pacific coast of southern Mexico and Central America.

The coastal sites span 1,426 miles, with annual precipitation increasing fourfold from the northernmost to the southernmost site. The findings reported in PLOS Biology are based on observations as well as field experiments, physiological data and an evolutionary model.

Ecuador laurels are deciduous, shedding their leaves during the dry season and growing new ones each rainy season. Pringle and her colleagues found that the strength of the tree-ant mutualism—as measured by investment of trees in sugar for ants and defense of leaves by ants—was greater at sites with longer dry seasons.

Laurel trees don’t feed ants sugar directly. Instead, they host scale insects, familiar to gardeners as common backyard pests, which produce the honeydew. Scale insects are the middlemen in this protection racket: through the scale insects, the trees indirectly pay a carbon fee, in the form of sugar-rich sap that is distilled into honeydew, to the ants in exchange for guard duty.

Pringle and her colleagues found that at the drier study sites, laurel trees support more scale insects, which in turn produce more honeydew. The ant colonies that feast on this bounty are correspondingly larger and defend trees more effectively, responding more quickly to disturbances. 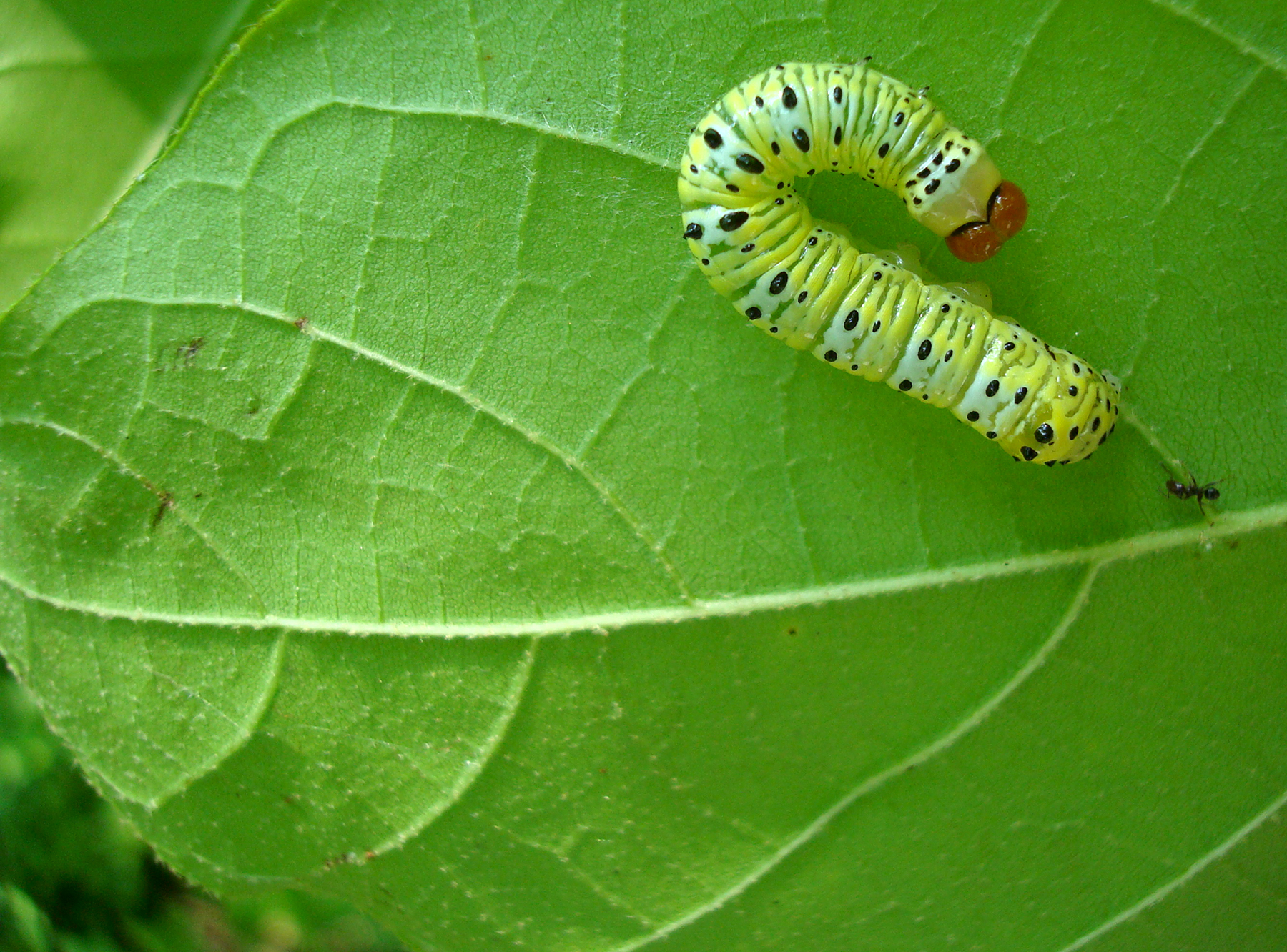 An Azteca ant approaches a caterpillar on an Ecuador laurel leaf in Jalisco, Mexico. Once the ant finds a caterpillar, it recruits nestmates to the leaf, and they bite the caterpillar’s underside. Larger ant colonies send more ants to attack such intruders. Together, the ants can chase caterpillars many times their size from the tree. Image credit: Elizabeth G. Pringle“When ants patrolling the surface of the tree encounter a leaf-eating insect, they bite the insect until it falls from the tree,” Pringle said. “We found that at the drier sites, the larger ant colonies were more likely to find such intruders, and the colonies sent more ants to attack the leaf-eaters and chase them away.”

Through photosynthesis, the leaves trap energy from sunlight and use it to convert carbon dioxide and water into carbon-based carbohydrates, which are used for food by the trees, the scale insects and the ants. Defoliation is a greater potential threat at the drier sites because laurels there have smaller carbon reserves, and a shorter rainy season means they have less time to replace lost leaves.

The fact that laurel trees at drier sites pay their ant protectors higher “wages” suggests that the potential costs of defoliation outweigh the relatively modest price of supporting more ants. Pringle and her colleagues used a mathematical model to test this idea, looking at the relative costs and benefits of carbon trading between trees and ants under rainy seasons of varying durations. 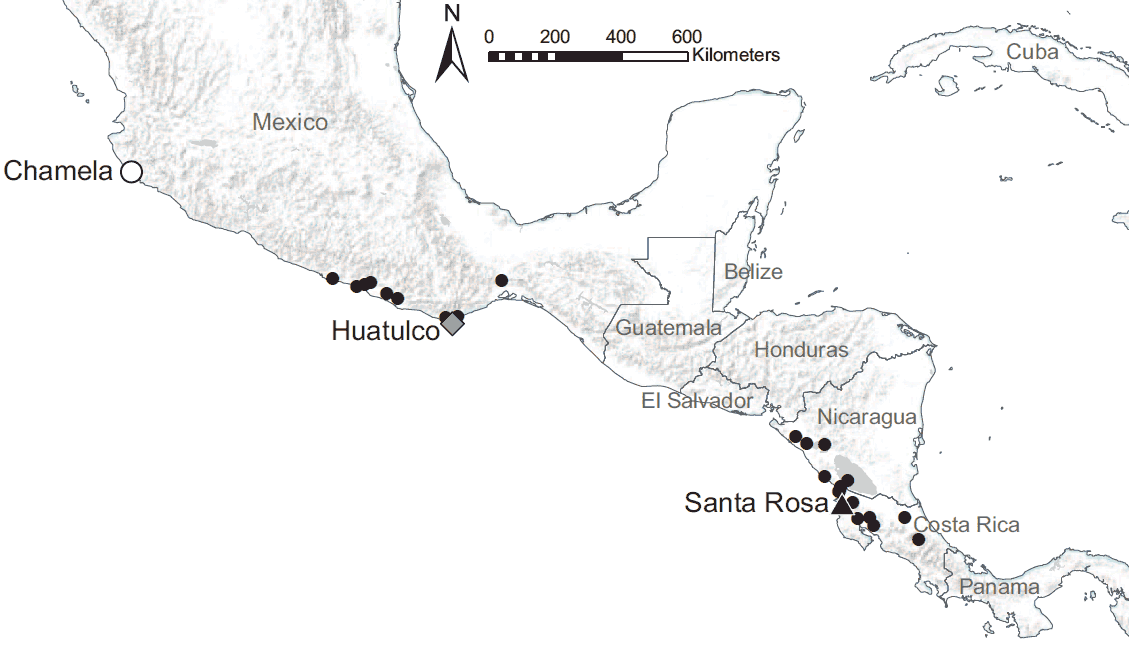 University of Michigan ecologist Elizabeth G. Pringle and her colleagues studied mutually beneficial interactions between Ecuador laurel trees and Azteca ants at 26 study sites in seasonally dry tropical forests along the Pacific coast of southern Mexico and Central America. The coastal sites span 1,426 miles, with annual precipitation increasing fourfold from the northernmost to the southernmost site. Additional work was conducted at three of the sites: Chamela, Huatulco and Santa Rosa. Image credit: Elizabeth G. PringleTheir insurance model, in which ants protect trees from rare but life-threatening defoliation events, best fit observations from the 26 sites. Like farmers buying crop insurance, the trees at drier sites appear to be hedging their bets: they pay a modest fee up front to avoid losing all their leaves to pests in the future.

Water limitation, together with the risk of herbivory, increases the strength of a carbon-based mutualism, the researchers say.

The insurance model suggests that infrequent but potentially lethal insect attacks may drive the evolution of tree-ant mutualistic strategies under different precipitation regimes. The observed differences between dry and wet sites may therefore reflect genetic adaptations to local conditions, the researchers suggest. 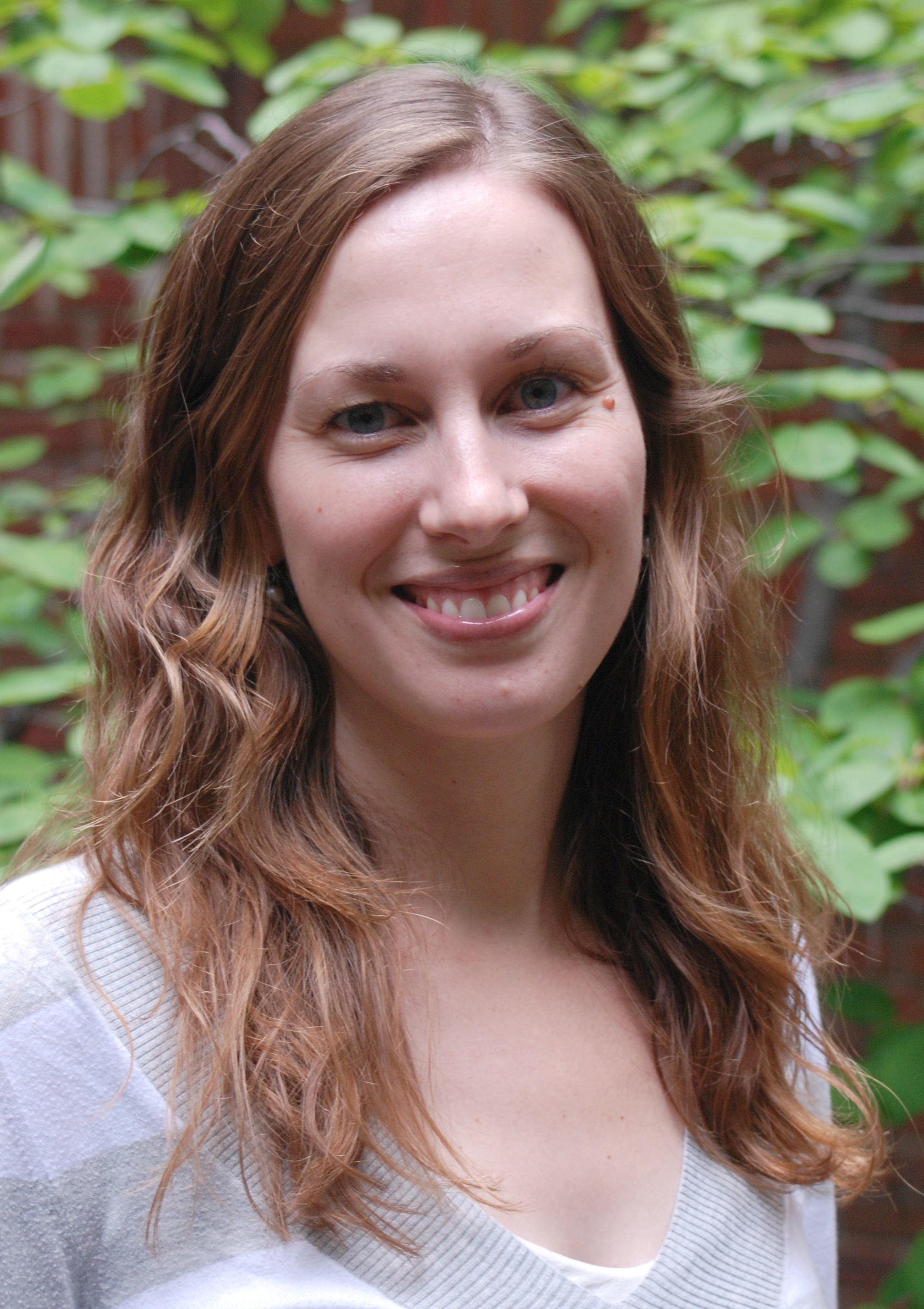 Elizabeth G. Pringle. Image credit: Dale Austin“It’s important that the key environmental factor in this system is rainfall, which is likely to change dramatically over the coming years with climate change,” Pringle said.

“As the climate changes, the increased frequency of extreme weather events, such as drought, may act together with rare biological events, such as outbreaks of insect pests, to profoundly alter the ecology and evolution of plant-animal interactions.”

Pringle’s co-authors on the PLOS Biology paper are Erol Akçay of the University of Pennsylvania, Ted Raab of the Carnegie Institution for Science, and Rodolfo Dirzo and Deborah Gordon of Stanford University.

The work was supported by the Santa Fe Institute, the Stanford Field Studies Program, a grant from the vice provost of graduate education at Stanford, a Hubert Shaw and Sandra Lui Stanford Graduate Fellowship, the Michigan Society of Fellows, and the National Science Foundation.