Nanoparticles can limit inflammation by distracting the immune system 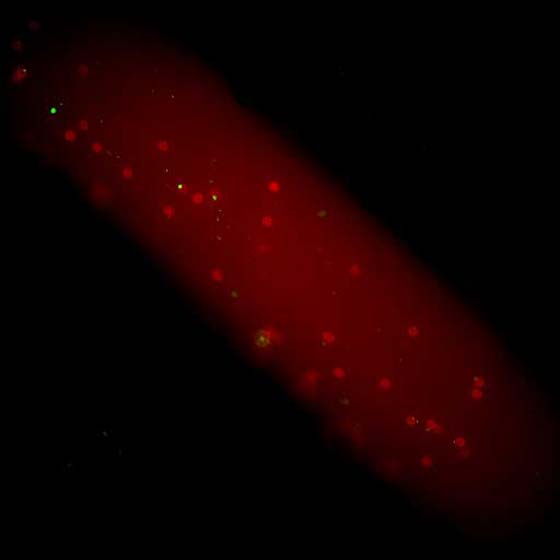 ANN ARBOR—A surprise finding suggests that an injection of nanoparticles may be able to help fight the immune system when it goes haywire, researchers at the University of Michigan have shown. The nanoparticles divert immune cells that cause inflammation away from an injury site.

Inflammation is a double-edged sword. When it works, it helps the body heal and fights off infections. But sometimes, the immune system overreacts. An acute lung injury, sustained by inhaling smoke, for instance, can lead to runaway fluid production that essentially drowns a person.

Now, experiments in mice suggest that simple plastic nanoparticles, delivered by IV, may be able to keep a type of immune cell—called a neutrophil—too busy to cause inflammation. Other diseases in which neutrophils cause excessive inflammation include sepsis and the hardening of the arteries, or atherosclerosis.

“Neutrophils are the first line of defense. They are the most active and the most optimized to mount an inflammatory response,” said Omolola Eniola-Adefeso, a professor of chemical engineering and biomedical engineering at U-M, who led the research. “They’re the underdogs of white blood cells, and we’re seeing that maybe we need to pay more attention to them.”

She didn’t start out looking to redirect the immune system with nanoparticles. Rather, her work has been exploring the dynamics within blood vessels that help or hurt the ability of nanoparticles to deliver drugs to the blood vessel wall and beyond. In experiments, her students ran blood through artificial blood vessels—channels etched into a chip and lined with the same kind of cells that line blood vessel walls.

At first, they saw only that the neutrophils were banishing their plastic particles, which were designed to attach to the blood vessel wall. This was a problem because if the particles couldn’t bind, they couldn’t deliver drugs to diseased tissue. But after watching the microscope video footage many times, they realized that the neutrophils also vanished—they weren’t binding to the blood vessel wall either.

“The ‘oh my God’ of horror about our particle turned into an excitement over these particles doing something to cells that had not previously been explored,” Eniola-Adefeso said. “These cool interactions between cells and particles got in the way of either one being able to do what they wanted to do.”

Her team designed an experiment injuring part of the blood vessel wall in the microfluidic chips and confirmed that the neutrophils were redirecting their attention from creating inflammation at the injury site to carting the foreign particles away.

Then, Eniola-Adefeso connected with Michael Holinstat, a professor of pharmacology at Michigan Medicine, who has technology that can see into the blood vessels of live mice. In mice with acute lung injury, they found that injecting nanoparticles by IV could reduce the number of neutrophils congregating at the injury site by half or more.

In fact, the neutrophil concentration was similar to the concentration found in the blood of uninjured mice. Instead, the neutrophils were taking the particles to the liver, where they could be removed from circulation. Eniola-Adefeso intends to continue the research in this direction, finding out whether an injection of nanoparticles is a viable treatment for conditions with excessive inflammation.

Her group will also continue troubleshooting nanoparticles as vehicles for targeted drug delivery. One way to keep the neutrophils away is to coat the particles with so-called nonfouling materials—materials that are resistant to picking up proteins from the blood. 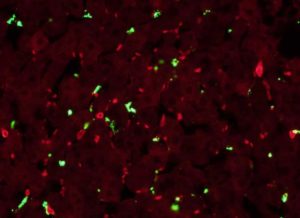 Neutrophils (red) arrest plastic nanoparticles (green) from the bloodstream and deliver them to the liver of a live mouse for disposal. Image credit: Catherine Fromen, Cell Adhesion & Drug Delivery Lab

Because the chemicals that the team uses to attach the nanoparticles to the blood vessel walls are the same as those used by the neutrophils themselves, a coating that combines nonfouling materials with the targeting chemicals will throw most white blood cells off the scent.

“To date, we’ve tried many nonfouling materials. But in the end, they foul because nature is very sophisticated,” she said.

Alternatively, other research groups have tried taking the membranes from cells that naturally travel to the targeted tissue—for instance, the neutrophils that attach to the blood vessel wall—and putting nanoparticles inside them. Like the alien in human skin from the film “Men in Black.”

The study, “Neutrophil-particle interactions in blood circulation drive particle clearance and alter neutrophil responses in acute inflammation,” is published online in the journal Nano Letters. It was funded by the National Science Foundation, the National Institutes of Health and U-M. Eniola-Adefeso is also a professor of biomedical engineering and of macromolecular science and engineering. Holinstat is also an associate professor of internal medicine.