Nanostructures get complex with electron equivalents

Nanoparticles of two different sizes break away from symmetrical designs 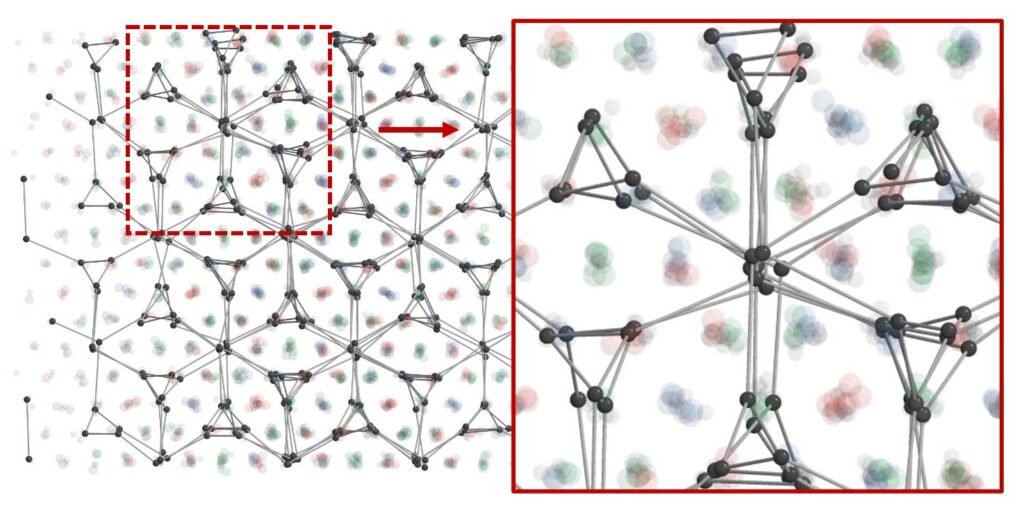 The structural illustration shows the triple-double-gyroid, a new crystal structure discovered by the researchers at Northwestern University, the University of Michigan and Argonne National Laboratory. It has never been found in nature or synthesized before. The translucent balls in red, green and blue show the positions of large nanoparticles. Each color represents a double-gyroid structure. The dark grey balls and sticks show the locations of the smaller, electron-like particles in one of three types of sites in which those particles appear. The formation of this new crystal structure is a result of the way electron-like nanoparticles control the number of neighbors around the larger nanoparticles. Image credit: Sangmin Lee, Glotzer Group

Complex crystals that mimic metals—including a structure for which there is no natural equivalent—can be achieved with a new approach to guiding nanoparticle self-assembly.

Rather than just nanoparticles that serve as “atom equivalents,” the crystals produced and interpreted by Northwestern University, University of Michigan and Argonne National Laboratory rely on even smaller particles that simulate electrons.

“We’ve learned something fundamental about the system for making new materials,” said Northwestern’s Chad Mirkin, the George B. Rathmann Professor of Chemistry in the Weinberg College of Arts and Sciences and a co-corresponding author of the paper in Nature Materials. “This strategy for breaking symmetry rewrites the rules for material design and synthesis.”

Nanoparticles have the potential to enable new materials with properties that can be carefully designed, but one of the big challenges is making these materials self-assemble. Nanoparticles are too small and numerous to build brick by brick.

Colloidal crystals are a family of self-assembled arrays made by nanoparticles, with potential applications in photonics. Crystals that can transform light may be engineered for everything from light sensors and lasers to communications and computing.

“Using large and small nanoparticles, where the smaller ones move around like electrons in a crystal of metal atoms, is a whole new approach to building complex colloidal crystal structures,” said Sharon Glotzer, the Anthony C. Lembke Department Chair of Chemical Engineering at U-M and a co-corresponding author.

“Building on Chad’s prior discovery of ‘electron equivalents’ with Northwestern’s Monica Olvera De La Cruz, we explored more complex structures where control over the number of neighbors around each particle produced further symmetry-breaking,” Glotzer said.

Smaller metal spheres, with fewer DNA strands to make them less sticky, end up acting like electrons in an arrangement of larger nanoparticle “atoms.” They roved around the interior of the structure, stabilizing the lattice of large nanoparticles. Mirkin’s team varied the stickiness of the “electron” nanoparticles to get different structures, as well as changing the temperature and the ratio of nanoparticle “atoms” and “electrons.”

They analyzed these structures aided by small-angle x-ray scattering studies carried out with Byeongdu Lee, a physicist at Argonne National Laboratory and a co-corresponding author. That data revealed three complex, low-symmetry structures. One, whose twisted tunnels are known as a triple double-gyroid structure, has no known natural equivalent.

These new, low-symmetry colloidal crystals offer optical and catalytic properties that can’t be achieved with other crystals, and the symmetry-breaking method promises many more new structures. Glotzer’s team developed computer simulations to recreate the self-assembly results, helping to decipher the complicated patterns and revealing the mechanisms that enabled the nanoparticles to create them.

“We’re in the midst of an unprecedented era for materials discovery,” Mirkin said. “This is another step forward in bringing new, unexplored materials out of the sketchbook and into applications that can harness their incredible properties.”

The study was supported primarily by the Center for Bio-Inspired Energy Science, an Energy Frontier Research Center funded by the U.S. Department of Energy and also by the Air Force Office of Scientific Research and the Sherman Fairchild Foundation.