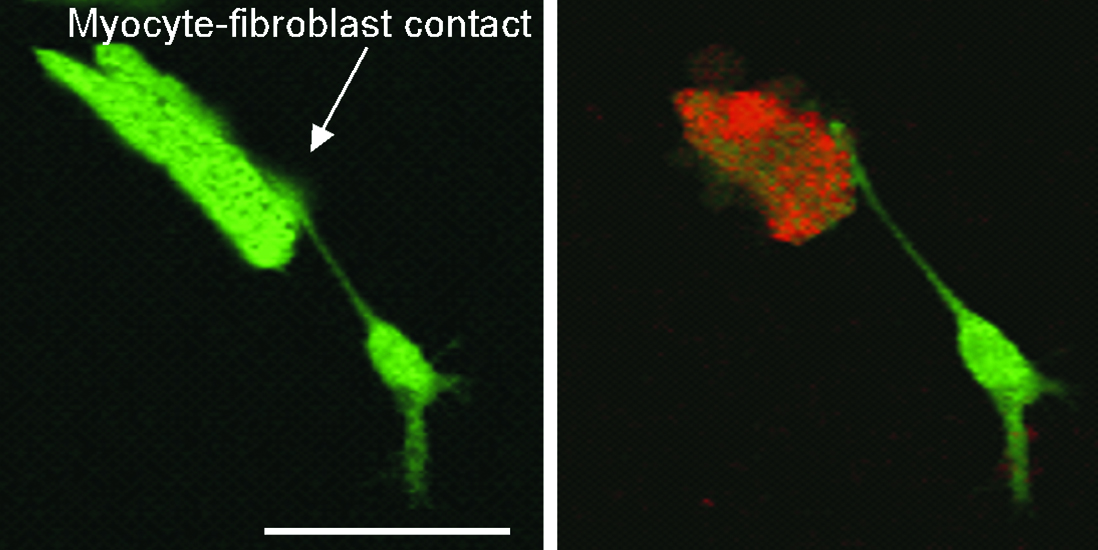 Microscopy photos show a cardiac myocyte cell (top) and an attached fibroblast cell (bottom) in a rat heart, after the injection of the newly developed nanoparticle. In the second frame, red light has been applied. The red coloring indicates that the myocyte, which causes cardiac arrhythmia, has been killed, while the fibroblast remains unharmed. Image credit: U.M.R. Avula et al., University of MichiganANN ARBOR—A new nanoparticle developed by University of Michigan researchers could be the key to a targeted therapy for cardiac arrhythmia, a condition that causes the heart to beat erratically and can lead to heart attack and stroke.

The disease affects more than 4 million Americans and causes more than 750,000 hospitalizations and 130,000 deaths per year in the U.S. alone.

The new treatment uses nanotechnology to precisely target and destroy the cells within the heart that cause cardiac arrhythmia. In studies conducted on rodents and sheep, the U-M team found that the treatment successfully kills the cells that cause cardiac arrhythmia while leaving surrounding cells unharmed. Their findings are detailed in a new study published in the journal Science Translational Medicine.

Cardiac arrhythmia is caused by malfunctions in a certain type of heart muscle cell, which normally helps regulate the heartbeat. Today, the disease is usually treated with drugs, which can have serious side effects. It can also be treated with a procedure called cardiac ablation that burns away the malfunctioning cells using a high-powered laser that’s threaded into the heart on a catheter. The laser also damages surrounding cells, which can cause artery damage and other serious problems.

The U-M team, led by Dr. Jérôme Kalifa, a cardiologist and assistant professor of internal medicine, and Raoul Kopelman, the Richard Smalley Distinguished Professor of Chemistry, Physics and Applied Physics, set out to target and destroy the cells with a far more precise technique that uses low-level red light illumination instead of a high-power laser.

Widely used today to treat cancer, the technique requires doctors to mark unwanted cells with a chemical that makes them sensitive to low-level red light. The red light then destroys the marked cells while leaving surrounding tissue unharmed.

“The great thing about this treatment is that it’s precise down to the level of individual cells,” Kopelman said. “Drugs spread all over the body and high-power lasers char the tissue in the heart. This treatment is much easier and much safer.”

The major challenge of adapting the therapy to heart cells was developing a nanoparticle small enough to penetrate the tiny pores inside heart capillaries, yet large enough to carry the chemical payload needed to do the job.

“In our cancer work, we used nanoparticles that were about 120 nanometers in size,” Kopelman said. “To work inside the heart, we needed to develop a particle that did the same job but was only six nanometers in size.”

Incredibly tiny even by nanotechnology standards, the particle had to pack in the light sensitivity chemical, an amino acid that causes it to be absorbed only by a specific type of heart muscle cells, and a natural chemical coating to camouflage it from the immune system.

Ultimately, the Kopelman team, including post-doctoral researcher H.K. Yoon and doctoral candidate Chang Lee, devised and synthesized a star-shaped particle made of polyethylene glycol—a widely used FDA-approved material. The particle has eight nanoscale tentacles, offering plenty of points to attach the chemicals needed for the process. The particle was tested by Uma Mahesh Reddy Avula, a research lab specialist in internal medicine.

“This cell-selective therapy may represent an innovative concept to overcome some of the current limitations of cardiac ablation,” Avula said.

The team tested a treatment that delivers the photo sensitizing chemical (made from algae) to the targeted cells by injecting nanoparticles loaded with both the chemical and an amino acid-based peptide that causes the nanoparticles to be taken up only by the targeted cells. Red light is then delivered to the area using a procedure similar to today’s cardiac ablation. The low-level light destroys only the cells that have absorbed the nanoparticles, leaving the other heart cells unharmed.

Encouraged by the technique’s performance in animal studies, Kalifa and Kopelman believe the next step is to begin human trials using the technology. The team is also working to devise a method for producing larger quantities of the nanoparticles at pharmaceutical-grade standards. While widely available treatment based on the technology is likely at least five years off, Kopelman is optimistic that it will find its way into common use.

The paper is titled “Cell-selective arrhythmia ablation for photomodulation of heart rhythm.” Funding was provided by the National Heart, Lung, and Blood Institute. The university is pursuing patent protection for the intellectual property.