Nearby planet-forming disk holds water for thousands of oceans 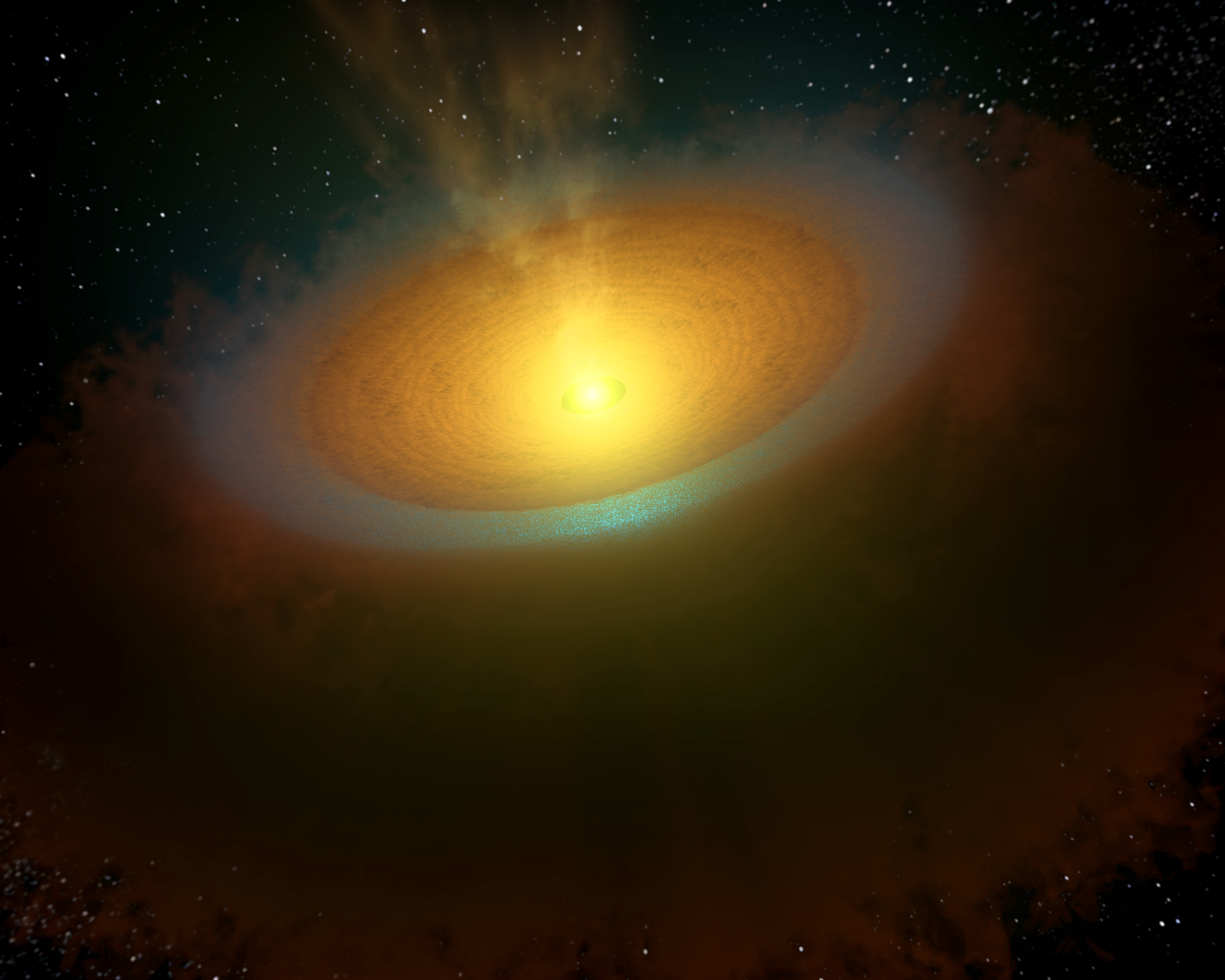 An illustration depicting the sprawling cloud of cold water vapor that astronomers have detected around the burgeoning solar system at the nearby star TW Hydrae. The cold water vapor could could eventually deliver oceans to dry planets that are forming in the system. Credit: NASA/JPL-Caltech/T. Pyle (SSC/Caltech)ANN ARBOR—For the first time, astronomers have detected around a burgeoning solar system a sprawling cloud of water vapor that’s cold enough to form comets, which could eventually deliver oceans to dry planets.

Water is an essential ingredient for life. Scientists have found thousands of Earth-oceans’ worth of it within the planet-forming disk surrounding the star TW Hydrae. TW Hydrae is 176 light years away in the constellation Hydra and is the closest solar-system-to-be.

University of Michigan astronomy professor Ted Bergin is a co-author of a paper on the findings published in the Oct. 21 edition of Science.

The researchers used the Heterodyne Instrument for the Far-Infrared (HIFI) on the orbiting Hershel Space Observatory to detect the chemical signature of water.

“This tells us that the key materials that life needs are present in a system before planets are born,” said Bergin, a HIFI co-investigator. “We expected this to be the case, but now we know it is because have directly detected it. We can see it.”

Scientists had previously found warm water vapor in planet-forming disks close to the central star. But until now, evidence for vast quantities of water extending into the cooler, far reaches of disks where comets and giant planets take shape had not emerged. The more water available in disks for icy comets to form, the greater the chances that large amounts will eventually reach new planets through impacts.

“The detection of water sticking to dust grains throughout the planet-forming disk would be similar to events in our own solar system’s evolution, where over millions of years, these dust grains would then coalesce to form comets. These would be a prime delivery mechanism for water on planetary bodies,” said principal investigator Michiel Hogerheijde of Leiden University in the Netherlands.

Other recent findings from HIFI support the theory that comets delivered a significant portion of Earth’s oceans. Researchers found that the ice on a comet called Hartley 2 has the same chemical composition as our oceans.

HIFI is helping astronomers gain a better understanding of how water comes to terrestrial planets—Earth and beyond. If TW Hydrae and its icy disk are representative of many other young star systems, as researchers think they are, then the process for creating planets around numerous stars with abundant water throughout the universe appears to be in place, NASA officials say.

The paper is titled “Detection of the Water Reservoir in a Forming Planetary System.” Also contributing are researchers from California Institute of Technology, the University of Amsterdam, the Harvard-Smithsonian Center for Astrophysics, Johns Hopkins University, the European Southern Observatory, NASA Jet Propulsion Lab and the Max-Planck-Institut f