ANN ARBOR—Jeff Plotzke looks like a runner—lean with springy energy, someone who knows his own body and likes to push its limits.

Plotzke wants to improve his running time. He’s starting marathons and hopes to go faster and develop a more efficient gait, so he’s asked the experts at the U-M Michigan Performance Research Laboratory to help him notch it up.

Athletes of all levels, from marathoners like Plotzke to casual joggers, take their running seriously, and this is the crowd that the lab will cater to.

It’s not the analysis you get when you buy running shoes, when the salesperson videotapes your gait as you run on the store treadmill. The lab is part of the School of Kinesiology and four individualized packages are offered: postpartum, injury, novice and performance.

“I think one of the benefits of this analysis is taking complex information and distilling it down to something that’s meaningful to the weekend warrior,” said Jessica Deneweth Zendler, lab director and assistant research scientist. “We’re very conscious of not making it a novelty, but making it useful to people.”

The consult starts with Cristine Agresta, a postdoctoral fellow and physical therapist, examining the three pairs of running shoes Plotzke brought with him. Agresta is most interested in the oldest pair because the deeper wear patterns say more about his running gait than Plotzke can probably say about it himself. She studies them while Deneweth Zendler takes pictures. 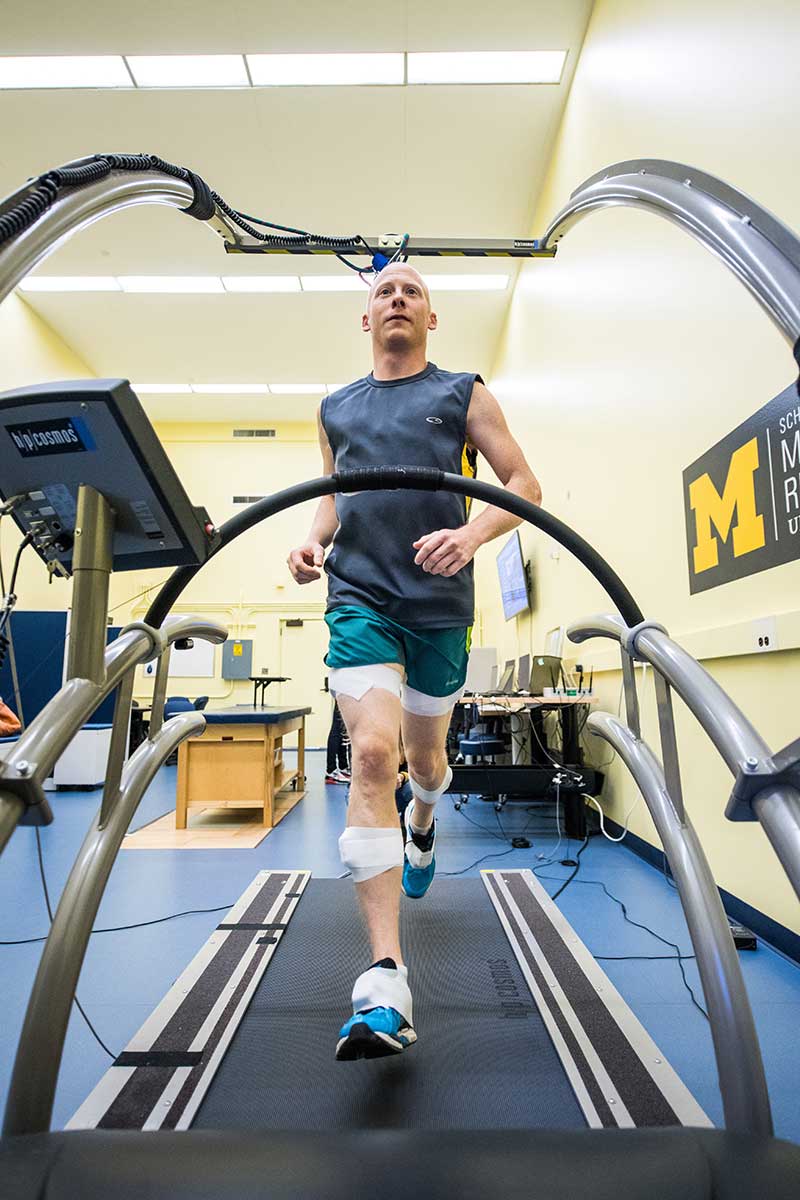 The Michigan Performance Research Laboratory (MiPR Lab) focuses on optimizing individual’s athletic performance. MiPR employs the most advanced body-worn sensor technologies to evaluate an athlete. The data collected is used to develop more effective training strategies, equipment, and screening tools to improve an athlete’s physical capabilities and long-term health. Image credit: Austin Thomason, Michigan PhotographyThe physical exam Agresta performs is like detective work—Plotzke’s posture, flexibility, even the set of his shoulders and head position, help Agresta tease out his body’s weaknesses and strengths. That Agresta is a physical therapist elevates the lab above its competition—most don’t have that kind of clinical expertise on staff.

First, Agresta has Plotzke stand and raise his arms as she looks for muscle-related problems. One shoulder blade wings out, maybe from poor posture or a shoulder injury. He’s got some slight forward head posture, perhaps from wrapping himself around the frame during triathlon biking or from his desk job.

Agresta has him hop on one foot and squat and notes that the muscle mass is bigger in the left quad and right calf, which could be related to old knee or ankle injuries. All of these asymmetries can cause glitches in his gait that gnaw away at Plotzke’s efficiency.

Next, Plotzke lies down on the exam table. She manipulates his legs in various ways and notes more trouble areas—tenderness, left hip rolling up when bending, tight thigh muscles. For the most part, the look on Plotzke’s face is a pleased, “Who knew?” Agresta’s telling him things about his body he hadn’t really thought about or even suspected.

“The points where you have pain aren’t usually the problems, they are the victims yelling out,” Agresta said. “People think if they have pain in their foot it stops there, but that’s not the case. Your neck could be contributing to knee problems. It’s all connected.”

Agresta says even little adjustments in gait can make a huge difference.

“I’ve seen people come in here injured and in their next race they get a PR (personal record),” she said.

Finally, Plotzke is outfitted with sensors on his neck and legs, which measure load and impact, and he runs on a specialized treadmill for about 15 minutes at various speeds. Cameras film his gait, and big screens project 3D images of his body, including little starbursts that indicate the precise impact and position of his striking feet as measured by the 10,000 sensors beneath the treadmill belt.

When he’s finished, Agresta gives him her report. Things looks good but there’s room for improvement.

“Your arm is barely moving,” Agresta points out. Nor is there optimal hip extension on push off. The arms and leg extension help propel the body forward, so this is something for Plotzke to work on.

“You’re not getting as much distance as you could,” Agresta tells him. She gives him physical therapy exercises to strengthen the muscles in question.

Plotzke is pleased. “I think it’s valuable data,” Plotzke said. “It’s not possible for us to look at ourselves while we’re running and see what we should be doing to improve our form.”

In the future, they’d like to expand the lab to include outdoor running. “Many runners never run on a treadmill,” Deneweth Zendler said. “Running outside is very different.”