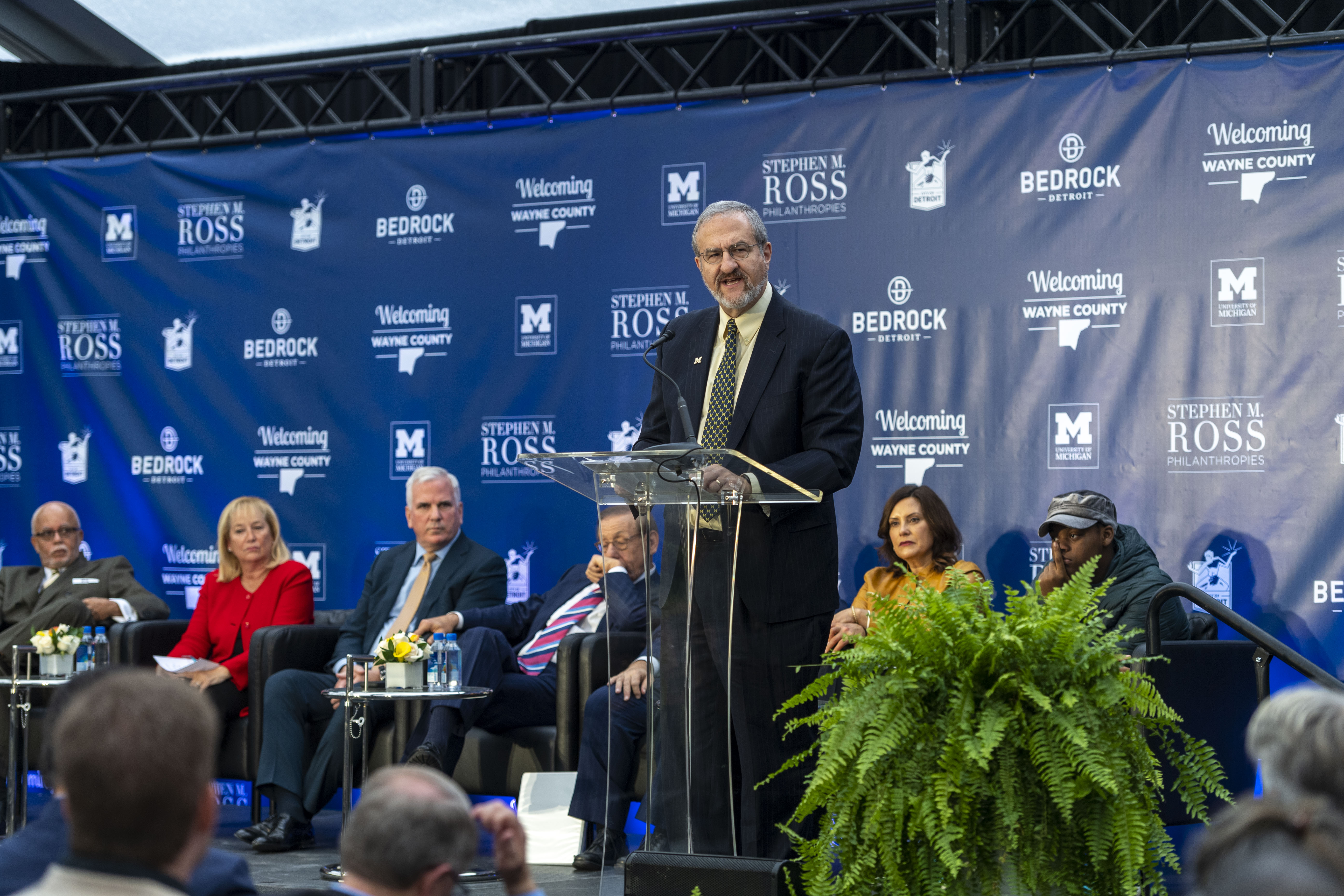 Anchoring the site will be a world-class $300 million, 190,000-square-foot research and education center operated by U-M, the nation’s leading public research institution. This academic building, designed by world-renowned architecture firm Kohn Pedersen Fox, will be a centerpiece of the first phase of a planned multibuilding development at the east edge of downtown and will offer programs that focus on high-tech research, education and innovation.

It is anticipated the new U-M facility will eventually serve up to 1,000 graduate and senior-level undergraduate students pursuing advanced degrees in a range of high-tech innovation disciplines, including mobility, artificial intelligence, data science, entrepreneurship, sustainability, cybersecurity, financial technology and more.

Development of the academic building will be made possible by a major gift from Ross, who envisioned the Detroit Center for Innovation and is a long-term benefactor of U-M and native of Detroit, and leadership gifts from Dan Gilbert and other public and private funders.

The initial phase of the DCI build-out also will include incubator and startup services for entrepreneurs, collaboration space for established companies, residential units, a hotel and conference center and event space. The new multibuilding complex will be located at the site of the former Wayne County Jail project at Gratiot Avenue and St. Antoine Street and serve as a new gateway to Detroit’s burgeoning downtown, connecting the central business district and Greektown to Lafayette Park and Eastern Market.

“This announcement represents an incredible commitment to Detroit by Stephen Ross, Mark Schlissel and Dan Gilbert that will allow us to develop, attract and retain world-class talent,” Duggan said. “Detroit has always been a leader in innovation and this new center will help ensure that continues to be the case into the future.

“It also sends a powerful message to our young people about the city we are trying to build together. Instead of turning this property into a place where Detroiters are taken to be incarcerated, we are going to build for them one of the finest learning centers anywhere, filled with hope and real opportunity.”

Duggan, Evans and other project partners will take the next 90-180 days to assess the feasibility of the overall project and conduct community engagement with surrounding neighborhoods. Construction for the Detroit Center for Innovation is slated to commence in 2021.

“The Detroit Center for Innovation combines vision, leadership and a deep commitment to this city and state and I am very appreciative of the efforts of all involved,” Whitmer said. “This is an exciting opportunity for students around the world and is an exclamation point on Michigan’s efforts to build, attract and retain the best workforce in America.”

Ross said he sees this commitment as a way of giving back to the city of his youth. 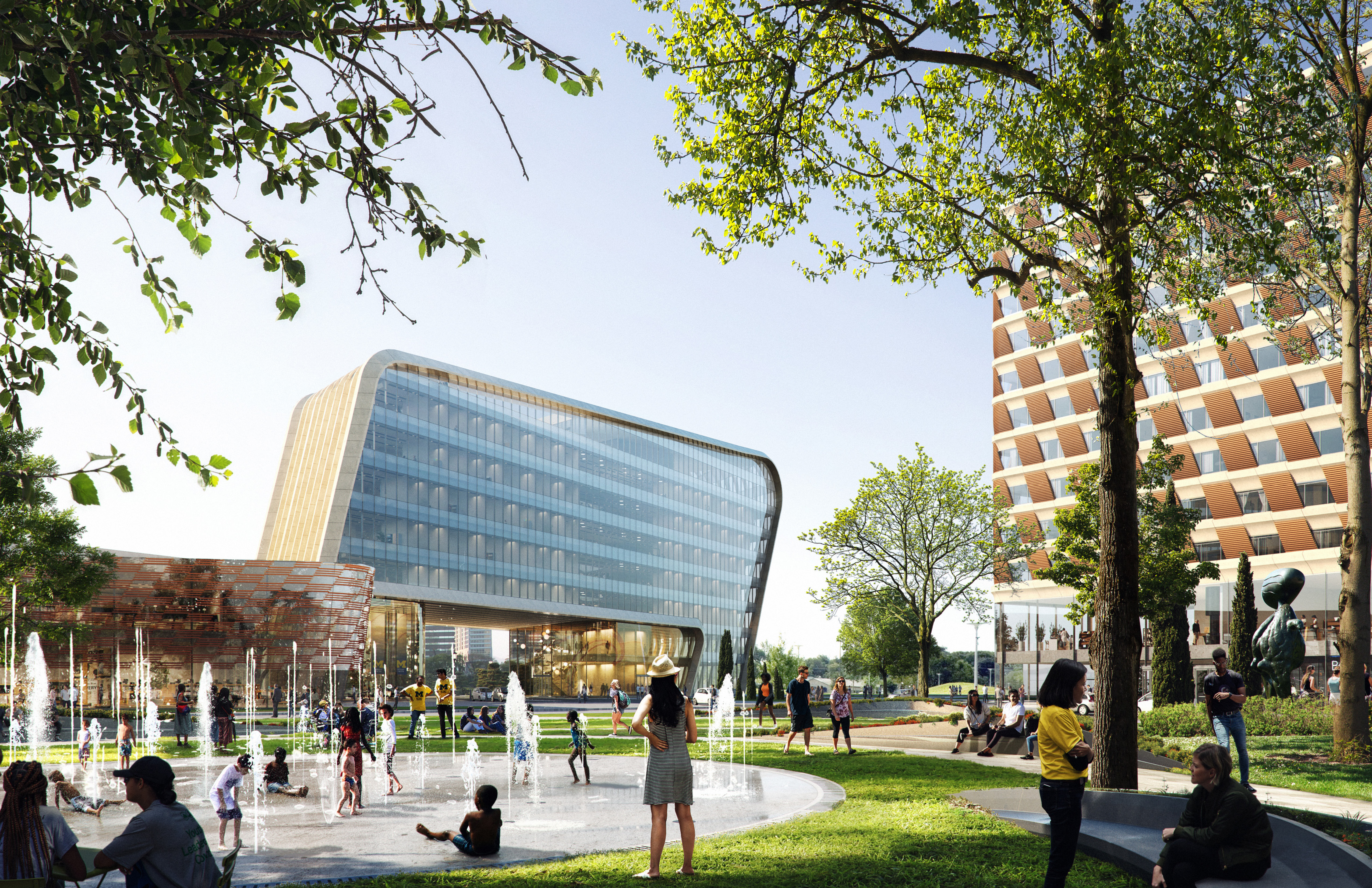 Rendering that illustrates what the Center at Gratiot Avenue and St. Antoine Street in Detroit will look like when finished. Image credit: Detroit Center for Innovation

“I spent my childhood and many of my young adult years living and working in Detroit and have long wanted to find a way to have a real impact on my hometown,” Ross said. “The University of Michigan helped spark my entrepreneurial spirit and nurtured my curiosity for all aspects of innovation, leading me to not only become a founder, but an incubator and investor in a variety of technologies and businesses.

“The idea of the new center reflects the shared commitment of Dan, myself, the city, the county, the state and the University of Michigan to create a transformative center for innovation that will help fuel the city’s next chapter of growth. The center has the potential to not only attract new businesses to Detroit, but the school and its graduates will generate new ideas, new companies and new opportunities for the community, the city and the region.

“Based on the commitments we already have in hand and the strong interest being expressed by other donors, I am highly confident that this project will come to full fruition.”

“Mayors everywhere want the jobs of tomorrow to emerge in their cities,” said Michael R. Bloomberg, founder of Bloomberg LP and Bloomberg Philanthropies. “As we’ve shown with Cornell Tech in New York, public-private partnerships can play an essential role in creating the talent pipelines our innovation economy needs to thrive. Detroit’s rebirth is a great example of this, and I applaud the city and state for taking further steps to draw talent and business into the region.”

“This is a transformative project in the history of our region, with impact beyond U-M and Detroit,” said Dug Song, co-founder and former CEO of Duo Security, now part of Cisco. “The Detroit Center for Innovation promises to be a gravity well for talent and capital, producing exciting new startups with ties to local industry that have the potential to sustain a long-term engine of growth and investment.”

Creating a pipeline of world-class talent

While the U-M academic center will provide instruction at the downtown Detroit Center for Innovation, degrees and certificates will be awarded by the Ann Arbor campus. It is designed to serve U-M or other students in the last year of their undergraduate program, as well as people seeking graduate degrees or stackable certificates.

When opened, the center will provide Michigan businesses a pipeline of talent and offer opportunities for current workers to further their skills in a world of fast-paced technological change. It will also build on Detroit’s growing presence as a center for innovation, which now includes Ford’s new Corktown mobility innovation campus, TechTown Detroit and Wayne State University.

The academic center will give faculty and students the opportunity to engage in interesting, innovative research across a number of technology-based fields and be designed with faculty input. Business incubators, research and development and collaboration space for large established companies, co-working space and startup support services will also be available, bringing top minds from the private sector together with the public and academic sectors. The collaborative approach will encourage business growth in Detroit as students graduate and start their own businesses in the area, with continued support from the center.

A new interdisciplinary committee made up of faculty from the university’s three campuses and led by U-M Vice Provost James Hilton will develop the center’s academic programs across a number of technology-based fields, as well as advise on the building’s design in relation to academic needs. In developing the academic programs, the faculty committee will draw upon strategic consultation with the Detroit business community and programs will be reevaluated every few years to see whether what the school is offering still meets the most pressing needs. In essence, every program developed for the Detroit Center for Innovation will have a built-in expiration date.

The center holds the potential to offer other certification and advanced career development courses for employees of businesses and corporations in the Detroit area in response to the changing needs of evolving technology.

“U-M will provide advanced educational programs through the Detroit Center for Innovation that will be tailored to the current and future needs of the local economy,” Schlissel said. “The Detroit Center for Innovation is just the latest part of a thriving ecosystem of U-M engagement with the city of Detroit and its people. Our work involves collaborations that support a broad array of our state’s and communities’ needs, and the foundations for these partnerships began years, or even decades, ago through connections with local leaders, public school teachers, businesses and community advocates.

“We greatly appreciate Stephen Ross’ long and generous history of working to propel our university into the future, and we look forward to embarking with Dan Gilbert on this new venture for Detroit.”

Expansion of U-M’s impact in Detroit

The new downtown center is part of U-M’s growing footprint in and around Detroit, including its nearby UM-Dearborn campus, the Detroit Center on Woodward, a “cradle to career” P-20 collaboration with the Detroit Public Schools Community District at Marygrove College in Northwest Detroit, and the Rackham Memorial Building in Midtown. 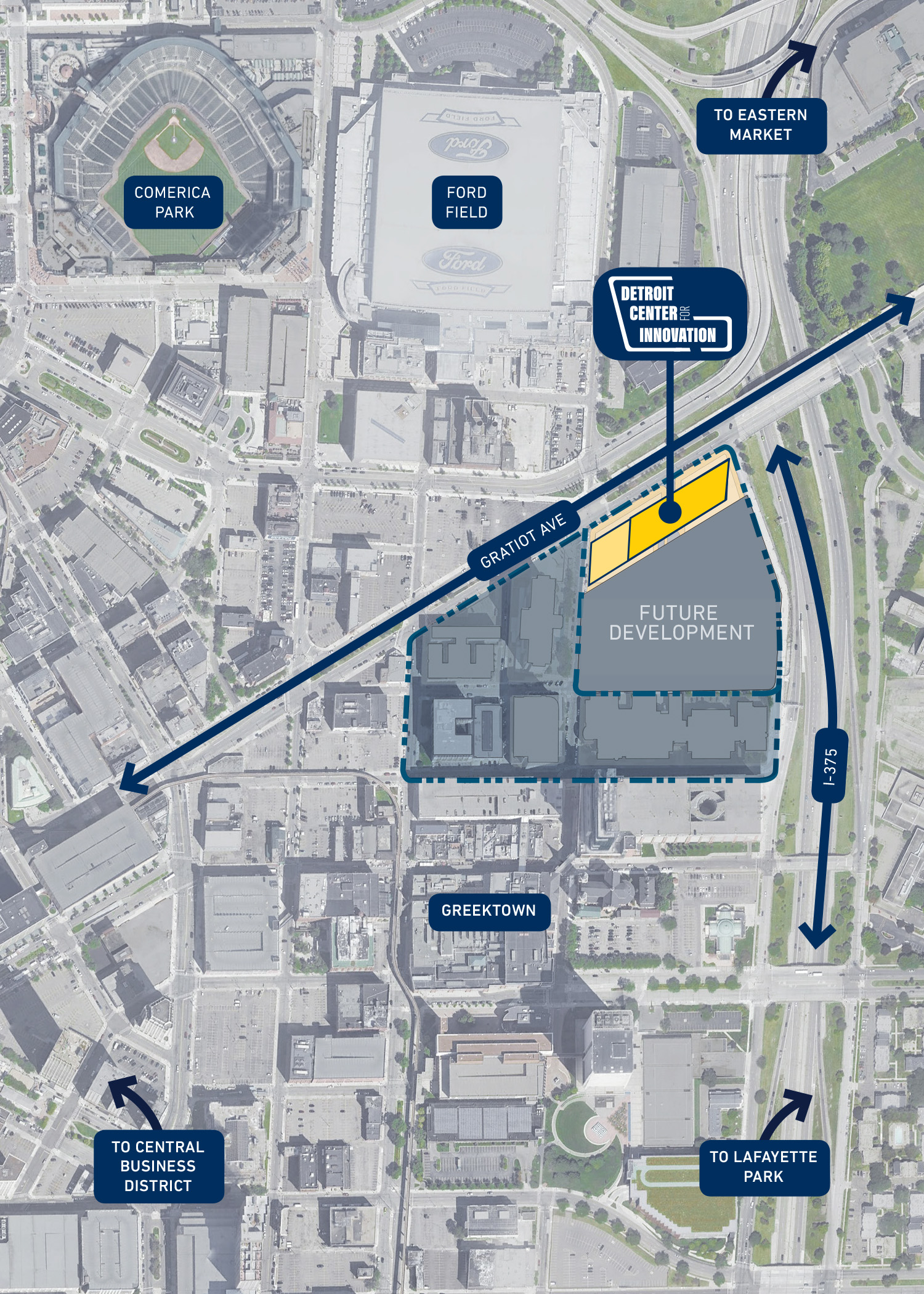 University officials have announced that the Rackham building will be the eventual home for a number of Detroit-based programs and functions, including an undergraduate admissions office, the Michigan Engineering Zone robotics program for Detroit high school students and the Poverty Solutions research initiative.

The university’s long-standing commitment to Detroit is also evident in initiatives like Wolverine Pathways, a free year-round college readiness program for 7th through 12th grade students who live in Detroit that offers a 4-year tuition scholarship to those who complete the program and are admitted to UM-Ann Arbor or UM-Dearborn.

A local center for Detroiters and students from around the world

In 2018, Bedrock announced that it acquired the Gratiot site from Wayne County after agreeing to build a new $533 million criminal justice center near Detroit’s Midtown neighborhood. Since acquiring the site, Bedrock demolished the half-built jail structure and is currently using the site to support construction related to other in-progress developments in downtown Detroit.

“Acquiring the Gratiot site was a priority for us as Dan had always envisioned it as a gateway to the city. He knew that the perfect development would not only activate the site, but be a catalyst for the entire city,” Cullen said. “By partnering with Stephen Ross and the University of Michigan, we are able to strategically develop the space to accommodate, attract and develop top talent from across the nation and from our own neighborhoods. The center expands technology-focused skills training in Detroit, and will connect that talent with sustainable and competitive careers right outside their door. We could not have imagined better partners to build this than Stephen Ross and the University of Michigan, and are eager to see Dan’s vision come to life.”

The development of the Detroit Center for Innovation will be publicly reviewed by the Wayne County Commission, which will play a vital role in transferring the land for the project from Bedrock to U-M.

“My administration saw it as our responsibility to get the best possible result at the failed jail site. I take pride in the fact that we demolished one of the most infamous symbols of government failure, and are now poised to build a world-class educational center,” Evans said. “As the project progresses, it is now our responsibility to ensure this is an inclusive institution that any student in the city and county can aspire to attend. I look forward to working with our partners to ensure students of all backgrounds and income levels have a viable path to study and grow here.”

For more information on the development, visit: detroitcenterforinnovation.com