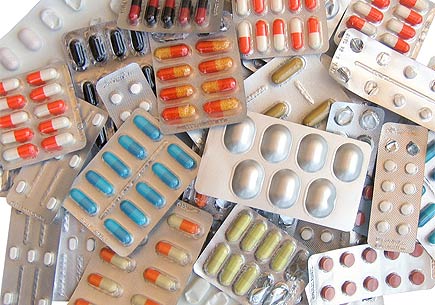 ANN ARBOR—Returning extra medicine to the pharmacy for disposal might not be worth the extra time, money or greenhouse gas emissions, according to a University of Michigan study that is the first to look at the net effects of so-called take-back programs.

The new evidence suggests that discarding unused drugs in the trash is a better option to limit the risk of poisoning and at the same time curb pollution of both water and air.

To arrive at this conclusion, the researchers compared the total emissions created by take-back, trash and toilet disposal methods. This included emissions of pharmaceutical active ingredients as well as releases of other water and air pollutants.

“National policy seems to be changing to support take-back programs, and we don’t know if that’s justified,” said Sherri Cook, a doctoral student in the U-M Department of Civil and Environmental Engineering. Cook is first author of a paper on the findings published in the May 16 edition of Environmental Science & Technology.

U.S. households accumulate an estimated 200 million pounds of unused pharmaceuticals every year, the researchers say. In most cases today, the FDA recommends throwing them away, but only if you don’t have access to a take-back program. Cities, states and even some stores have initiated them. From collection sites, the returned drugs are transferred to another facility where they’re incinerated as hazardous waste.

Health officials caution that unused pills should be out of the house as soon as possible to prevent poisoning and drug abuse by other family members. But that need must be balanced with pollution control, both for human health and environmental reasons. Flushing unused pills down the toilet is no longer advised, as the active ingredients in drugs have been found in drinking water and aquatic environments.

“Nobody has ever added up all the emissions associated with disposing of medication,” said Steve Skerlos, a professor in the departments of Mechanical Engineering and Civil and Environmental Engineering and a co-author of the study. “When you look at the available evidence to support take-back, it just doesn’t add up.”

The researchers focused on a 50 percent take-back compliance rate based on actual practice in Sweden, which has had a national take-back program for 40 years. The compliance rate there is just 43 percent. Drugs that aren’t returned tend to stay in the medicine cabinet, defeating the goal of getting unused medications out of the home quickly, the researchers say.

The U-M researchers considered a wide range of factors, including how often people would return medication, how far they live from take-back sites, how rainfall might affect landfill leachate leaking into groundwater, and what percentage of residents could be expected to comply. The results surprised the team.

“We didn’t expect that landfilling would be the best option, because when you incinerate something, it’s gone, and when it’s in a landfill, it can remain for some time,” said Nancy Love, a professor in the Department of Civil and Environmental Engineering and a co-author of the study. “However, once we considered all the environmental emissions for the three options, the results made sense.”

The researchers encourage policymakers to focus on getting more people to get rid of medicines by trash, rather than take-back.

“Trashing unused medications reduces the consumer’s inconvenience relative to take-back, and if there is a clear message perhaps we could increase the percentage of people putting them in the trash,” Cook said.

When discarding pills in the trash, the FDA recommends mixing them with an unpalatable substance such as coffee grounds in a plastic bag. This helps to deter would-be abusers from picking them out of the garbage.