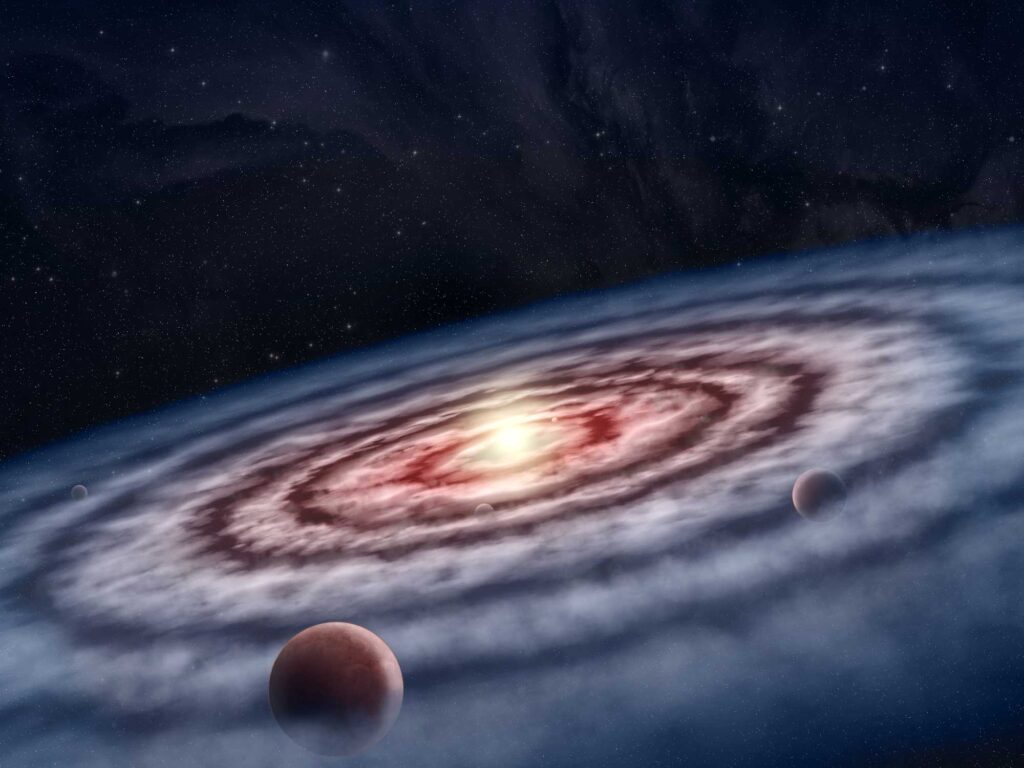 An international group of scientists, including University of Michigan astronomers, has mapped the chemical composition of protoplanetary disks surrounding five nearby young stars—an effort that will allow the astronomers to search the disks for planet formation in real time.

The survey provides the most detailed pictures of planet-forming gases to date, which will help scientists understand how planets form, ranging from gas giants called hot Jupiters to our own life-sustaining planet.

“The goal of this program was to survey the chemistry of planet formation with the highest resolution possible in a limited amount of time—just 130 hours. We wanted to know how planets are born and what sets their composition at birth,” said Edwin Bergin, U-M professor of astronomy, co-principal investigator of the survey and co-author on the papers.

“This can then be compared to the composition of exoplanetary atmospheres and in solar system planets to understand how common Jupiters are and, eventually, life-bearing worlds like the Earth.”

The collaboration used the Atacama Large Millimeter/submillimeter Array, or ALMA, to complete the most extensive chemical composition mapping of the protoplanetary disks at high resolution that allows scientists to probe the makeup of their planet- and comet-forming regions.

Pictured is a collage showing about 50% of the complete data from the MAPS collaboration. Image credit: Charles Law, Molecules with ALMA at Planet-forming Scales

The new study unlocks clues about the role of molecules in planetary system formation, and whether these young planetary systems in-the-making have what it takes to host life. The results of the program, called MAPS, or Molecules with ALMA at Planet-forming Scales, will appear in an upcoming 20-paper special edition of The Astrophysical Journal Supplement Series.

Planets form in the disks of dust and gas, called protoplanetary disks, surrounding young stars. The chemical makeup of these disks may have an impact on the planets themselves, including how and where planetary formation occurs, the chemical composition of the planets, and whether those planets have the organic composition necessary to support life.

“A planet’s composition is a record of the location in the disk in which it was formed,” said U-M astronomer Arthur Bosman, lead author of many of the studies. “Connecting planet and disk composition enables us to peer into the history of a planet and helps us to understand the forces that formed it.” 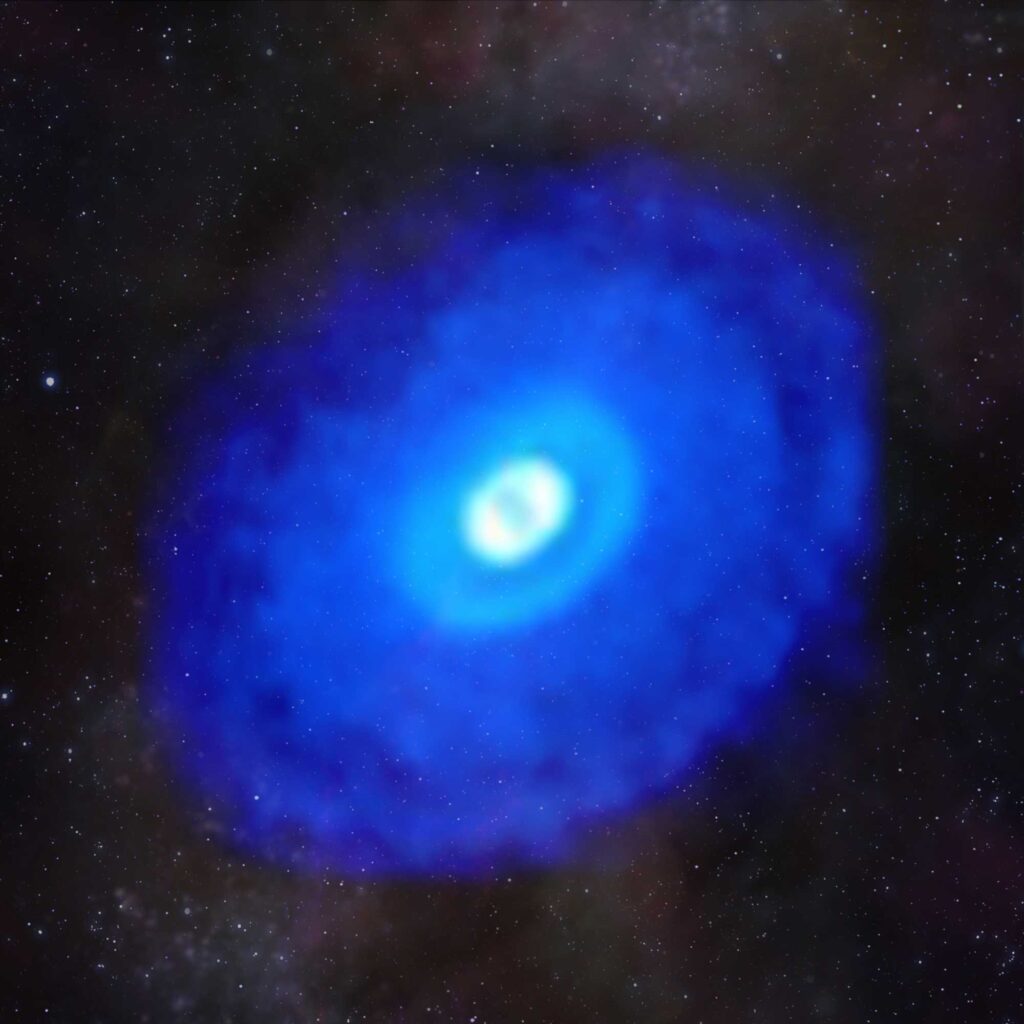 This composite image of ALMA data from the young star HD 163296 shows hydrogen cyanide emission laid over a starfield. The MAPS project zoomed in on hydrogen cyanide and other organic and inorganic compounds in planet-forming disks to gain a better understanding of the compositions of young planets and how the compositions link to where planets form in a protoplanetary disk. Image credit: ALMA (ESO/NAOJ/NRAO)/D. Berry (NRAO), K. Öberg et al (MAPS)

MAPS specifically looked at the protoplanetary disks surrounding the young stars IM Lup, GM Aur, AS 209, HD 163296 and MW480, where evidence of ongoing planet formation has already been detected. The project led to multiple discoveries, including a link between dust and chemical substructures and the presence of large reservoirs of organic molecules in the inner disk regions of the stars.

“With ALMA, we were able to see how molecules are distributed where exoplanets are currently assembling, and what we saw is that most planets likely form in a chemical environment that looks rather similar to the solar nebula, the birthplace of our solar system,” said MAPS principal investigator Karin Öberg, an astronomer at the Harvard Smithsonian Center for Astrophysics.

“Most importantly, we saw that the planet-forming disks around these five young stars are factories of a special class of organic molecules, so-called nitriles, which are implicated in the origins of life here on Earth.”

Bosman led Maps VII, which examined the elemental composition of the gas at locations in three of the five disks targeted by MAPS where Jupter-like planets may be forming. In his study, Bosman and co-authors found the gas surrounding these potentially nascent planets to be poor in carbon, oxygen and heavier elements, while rich in hydrocarbons, such as methane. 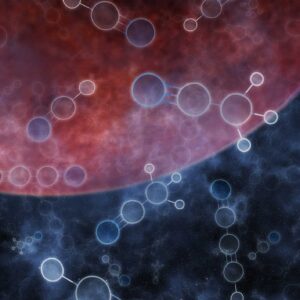 “The chemistry that is seen in protoplanetary disks should be inherited by forming planets,” Bosman said. “A carbon- and oxygen-poor environment suggests the existence of a subset of giant planets that have low water abundances in general. This is the opposite of current planet composition studies, and we are finding that the building blocks of many giant planets out there are very different from what we think formed our own solar system giants, Jupiter and Saturn.”

Bosman and Bergin pushed ALMA’s techniques to its limits in order to observe the velocities of gas very close to a disk’s star, within three astronomical units—an astronomical unit is the distance between the Earth and the sun. Gas swirls at higher velocity the closer it is to the star, and based on these velocities, Bosman and Bergin were able to observe one object that appears to be on the verge of planet formation. These results are published in the study MAPS XV.

“This allows us to look for signatures of these hidden forming planets in the gas structure—sort of a planet calling card: ‘I’m here,'” Bergin said.

All together, MAPS is providing exactly that: a map for scientists to follow, connecting the dots between the gas and dust in a protoplanetary disk and the planets that eventually form from them to create a planetary system.