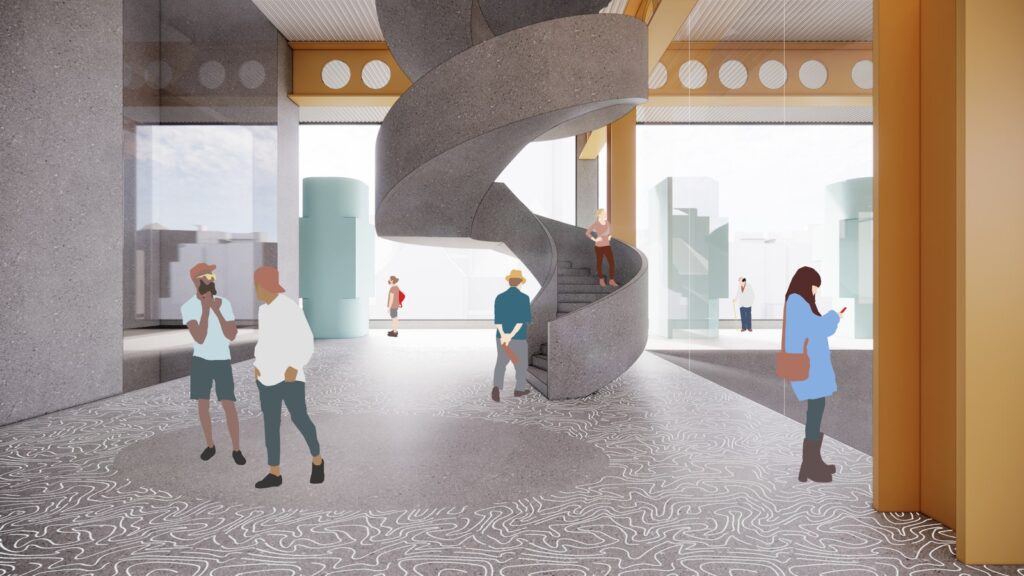 When an architect or designer completes a rendering of a building, streetscape or space, the last step in the process is to include human figures to provide a sense of scale and to make the space feel alive.

According to Bryan Boyer, assistant professor at the University of Michigan Taubman College of Architecture and Urban Planning, filling images with people is a requisite step in the process, but often fraught with challenges.

“It’s amazing how much time and effort that architects, generally entry-level staffers, put into collecting images of people and cutting them out at special angles in order to fit them into a final image,” said Boyer, who is also director of Taubman College’s Urban Technology program. “It’s on the designer’s shoulders to make decisions about the representation of the population in the space, and when you’re fighting to get things done on a deadline, representation is too often the thing that slips.”

That’s why he co-created People Party!, a new app that takes the guesswork and grunt work out of populating human scale figures into final architectural renderings.

Developed by Dash Marshall, the Detroit- and Brooklyn-based architecture and strategic design studio co-founded by Boyer, the app allows users to upload a scene or rendering, input the city where the image is situated, and the app automatically generates a population of human figures based on data from the U.S. Census Bureau.

“We’re introducing data into what is typically a process driven by idiosyncratic artistic choices,” he said. “If you’re designing a space in a specific city, the people in the drawing should reflect the makeup of that city. If you enter the location as Detroit, for example, the diversity of the scale figures generated in the app will align with the actual population—78% African American, 14% white, 7% Hispanic or Latino, etc.”

In addition to varying skin tones that account for diversity in ethnicity or race, the colorblock-style “party people” appear in a diversity of genders, ages and body shapes. Users will also see people with varying mobility needs, including those with wheelchairs, canes and crutches added to the mix.

The app is versatile, allowing users the ability to adjust the color palette, size, pose or garments to reflect a seasonal scene.

According to Boyer, there are many potential uses for the app beyond the world of architecture.

“In a sense, we’re creating an easy tool to make more sophisticated images of community—we want it to be joyful,” he said. “It’s useful to architects, but I can also see it being used as dynamic clip art for product design, corporate reporting, presentations, social media, museums, exhibitions and more.”

People Party! is currently in a free, limited pre-release phase, where users can sign up to be added to a wait list with rolling acceptance. Dash Marshall intends to officially launch the app in January 2022 after beta testing is complete.