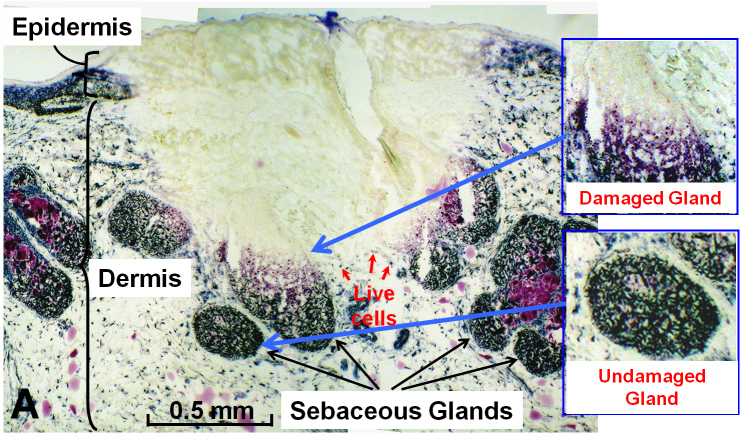 A laser developed at the University of Michigan can selectively target and damage sebaceous glands, which are known to play a role in acne. Credit: Mohammed Islam

Its 1,708-nanometer, infrared beam takes advantage of a unique wavelength that fat can absorb more efficiently than water , which makes up more than half of the human body. It can penetrate skin with minimal harm on its way to reach and destroy deeper pockets of fat, said Mohammed Islam, a professor of electrical engineering and internal medicine. The research is described in a paper published in Lasers in Surgery and Medicine.

The laser could treat acne by targeting the oil-producing sebaceous glands, which are known to be involved in the development of the skin disease.

“Typically it’s very hard to penetrate deep enough in the skin because of water absorption, but we picked a wavelength that’s tuned in to fats,” Islam said.

The new laser, which is the size of a DVD player, can reach glands more than 1.5 millimeters beneath the skin.

“Acne is an extremely common condition without an ideal treatment,” said Dr. Jeffrey Orringer, an associate professor of dermatology at the U-M Medical School. “This laser system has the potential to alter sebaceous glands in the skin and thereby impact the pathogenesis of acne. We are quite excited about this and several other potential uses for this device.”

To prevent superficial burns, the researchers found that they had to first cool the skin before treating it. They performed the experiments on human samples that had been removed due to their proximity to non-melanoma skin cancers.

The U-M team is not the first to think of this type of treatment, but they are believed to be the first to propose doing it with off-the-shelf telecommunications technology.

“Toward the middle of the last decade, there were experiments like this done using a free electron laser that was pretty much the size of an entire hospital. It was an interesting result, but it wasn’t a practical light source,” Islam said. “I’m a fiberoptics guy. We’re taking what we’ve known for years in that field and building a laser that’s compact and economical and has real potential to make it to the marketplace.”

Islam and Orringer worked on this project with professor Michael Welsh in cell and developmental biology at the Medical School, as well as graduate students and a post-doctoral fellow in the College of Engineering on this project. In October, Islam will move into a new lab at the North Campus Research Complex, which is designed to enable similar interdisciplinary collaboration.

The paper is titled “Photothermolysis of Sebaceous Glands in Human Skin Ex Vivo with a 1,708 nm Raman Fiber Laser and Contact Cooling.” The research was supported by the University of Michigan Cardiovascular Center and U-M spinout company Omni Sciences, Inc. Islam is the founder, president, chief technology officer of Omni Sciences. Omni Sciences Inc. has licensed Islam’s technology from U-M.