New metamaterial can switch from hard to soft—and back again 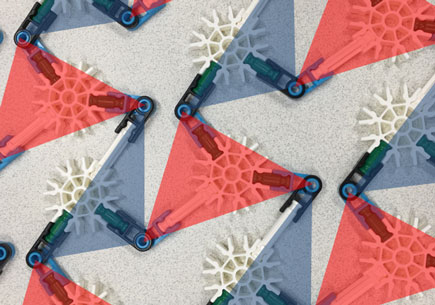 An illustration of the metamaterial. Image credit: Xiaoming Mao

ANN ARBOR—When a material is made, you typically cannot change whether that material is hard or soft. But a group of University of Michigan researchers have developed a new way to design a “metamaterial” that allows the material to switch between being hard and soft without damaging or altering the material itself.

Metamaterials are man-made materials that get their properties—in this case, whether a material is hard or soft—from the way the material is constructed rather than the material that constructs it. This allows researchers to manipulate a metamaterial’s structure in order to make the material exhibit a certain property.

In the group’s study, published in the journal Nature Communications, the U-M researchers discovered a way to compose a metamaterial that can be easily manipulated to increase the stiffness of its surface by orders of magnitude—the difference between rubber and steel.

Since these properties are “topologically protected,” meaning that the material’s properties come from its total structure, they’re easily maintained even as the material shifts repeatedly between its hard and soft states.

“The novel aspect of this metamaterial is that its surface can change between hard and soft,” said Xiaoming Mao, assistant professor of physics. “Usually, it’s hard to change the stiffness of a traditional material. It’s either hard or soft after the material is made.”

For example, a dental filling cannot be changed after the dentist has set the filling without causing stress, either by drilling or grinding, to the original filling. A guitar string cannot be tightened without putting stress on the string itself, according to Mao.

“When you’re driving a car, you want the car to be stiff and to support a load,” Mao said. “During a collision, you want components to become softer to absorb the energy from the collision and protect the passenger in the car.”

The researchers also suggest the material could be used to make bicycle tires that could self-adjust to ride more easily on soft surfaces such as sand, or to make damage-resistant, reusable rockets.