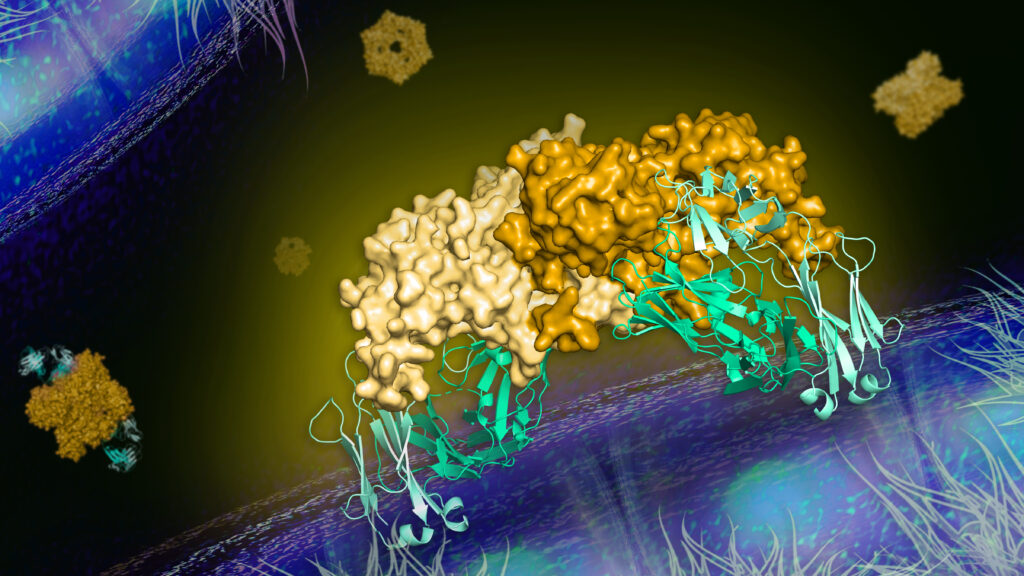 Researchers have revealed how one antibody (in green) is able to neutralize a protein that is central to the dengue virus’s ability to cause disease, by blocking the protein’s ability to interact with host cells. Image credit: Rajani Arora, U-M Life Sciences Institute

A team of researchers has discovered an antibody that blocks the ability of the dengue virus to cause disease in mice. The findings open the potential for developing effective treatments and designing a vaccine for dengue and similar diseases.

Dengue virus, a member of a group of viruses called flaviviruses, causes 50 to 100 million cases of dengue disease each year, with no effective treatment or vaccine. Other members of this group include the viruses that cause Zika, yellow fever and West Nile fever.

In a new study scheduled to publish Jan. 8 in the journal Science, researchers from the University of California, Berkeley, and the University of Michigan revealed how an antibody called 2B7 neutralizes one specific protein made by the virus—a protein that is key to the dengue virus’s ability to both replicate and cause disease.

The protein, called NS1 (short for “non-structural protein 1”) circulates in the patient’s blood and exacerbates disease by interacting directly with endothelial cells, the cells that form protective barriers around organs. By breaking apart the connections between endothelial cells, NS1 weakens this barrier, increasing permeability and contributing to increased vascular leak, which is the hallmark of severe dengue disease. This endothelial permeability may also enable the virus to more easily cross barriers to infect and damage target organs.

The authors and other researchers had previously demonstrated that this protein itself can cause leaks in the endothelial barrier, even in the absence of infectious viral particles. And in cases of dengue virus infection, the more NS1 found circulating in the host’s blood, the more severe the infection is likely to be.

“We think of bacterial toxins, but this idea of a viral toxin is a new concept,” said Eva Harris, a professor of infectious diseases and vaccinology at UC Berkeley’s School of Public Health and one of the study’s senior authors. “This is really an important protein in terms of creating new paradigms regarding how we think about viral proteins and their functions in disease.”

“This collaborative approach gives us a lot of great insight into understanding the biology of this protein, its interactions with cells and its pathogenesis,” said David Akey, a researcher at the U-M Life Sciences Institute and a lead author of the study. “It’s an example of combining structure and function to open therapeutic avenues.”

One reason no effective therapeutic has been found for dengue is that the disease can be caused by one of four different virus strains (dengue virus 1, 2, 3 or 4). Having antibodies against one strain of the virus can actually increase severity of a subsequent infection from another strain, a phenomenon called antibody-dependent enhancement.

By binding only to the NS1 protein and not to the virus particle itself, however, the 2B7 antibody does not lead to antibody-dependent enhancement of the infection.

“These findings tell us that we can really have an effect on the virus’s pathogenesis by blocking these sites on just the circulating proteins,” said Janet Smith, a professor at the U-M Life Sciences Institute and U-M Medical School. “It offers a strategy not only for a therapy to treat an infection, but also for a vaccine to prevent infection.”

And because the NS1 protein is produced by many flaviviruses, the scientists believe the antibody that targets NS1 may be useful in treating or preventing multiple flaviviruses.

“We were able to show not only the mechanism of how the antibody protects the host cells, but also the actual mechanism of pathogenesis of this protein that is conserved across other flaviviruses,” Harris said.

“I think the fact that this antibody is cross-reactive with other flavivirus NS1 proteins is one of the most exciting elements of this work,” said Scott Biering, a postdoctoral researcher in Harris’s lab and a lead author of the study. “This research is the proof of concept that you can target this one protein for multiple flaviviruses to protect against pathogenesis. It opens a lot of avenues not only for better understanding the mechanics of this virus, but also for developing effective therapeutics.”

The research was supported by the National Institutes of Health.