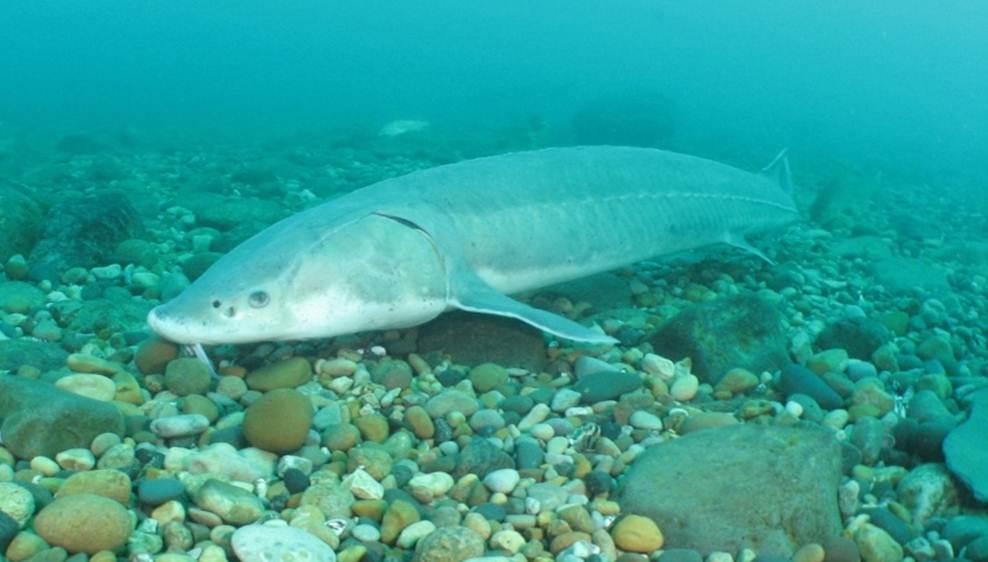 A lake sturgeon. Image credit: Adam LintzANN ARBOR– Construction of two new fish-spawning reefs is about to begin in the St. Clair River northeast of Detroit, the latest chapter in a decade-plus effort to restore native species such as lake sturgeon, walleye and lake whitefish.

The new reefs will be built this summer and fall at two locations on the St. Clair. The goal of the University of Michigan-led project is to boost fish populations by providing river-bottom rock structures suitable for spawning.

The crevice-filled rock beds are designed to mimic the natural limestone reefs that existed before the rivers connecting lakes Huron and Erie were dredged and blasted to create shipping canals, and before an increased flow of sediments into the system from agricultural and urban runoff.

Construction of the Harts Light Reef is scheduled to begin this week and is expected to last eight to 12 weeks. The site is adjacent to East China, between St. Clair and Marine City. Work at the Pointe Aux Chenes site, which is between Algonac and Russell Island, will likely begin in September and is expected to last six to eight weeks.

The $3.5 million project is funded by the federal Great Lakes Restoration Initiative and is a follow-up to rock reefs built in the Detroit and St. Clair rivers in 2004, 2008 and 2012. The habitat-restoration project is led by U-M in collaboration with various local, state, federal and private partners. 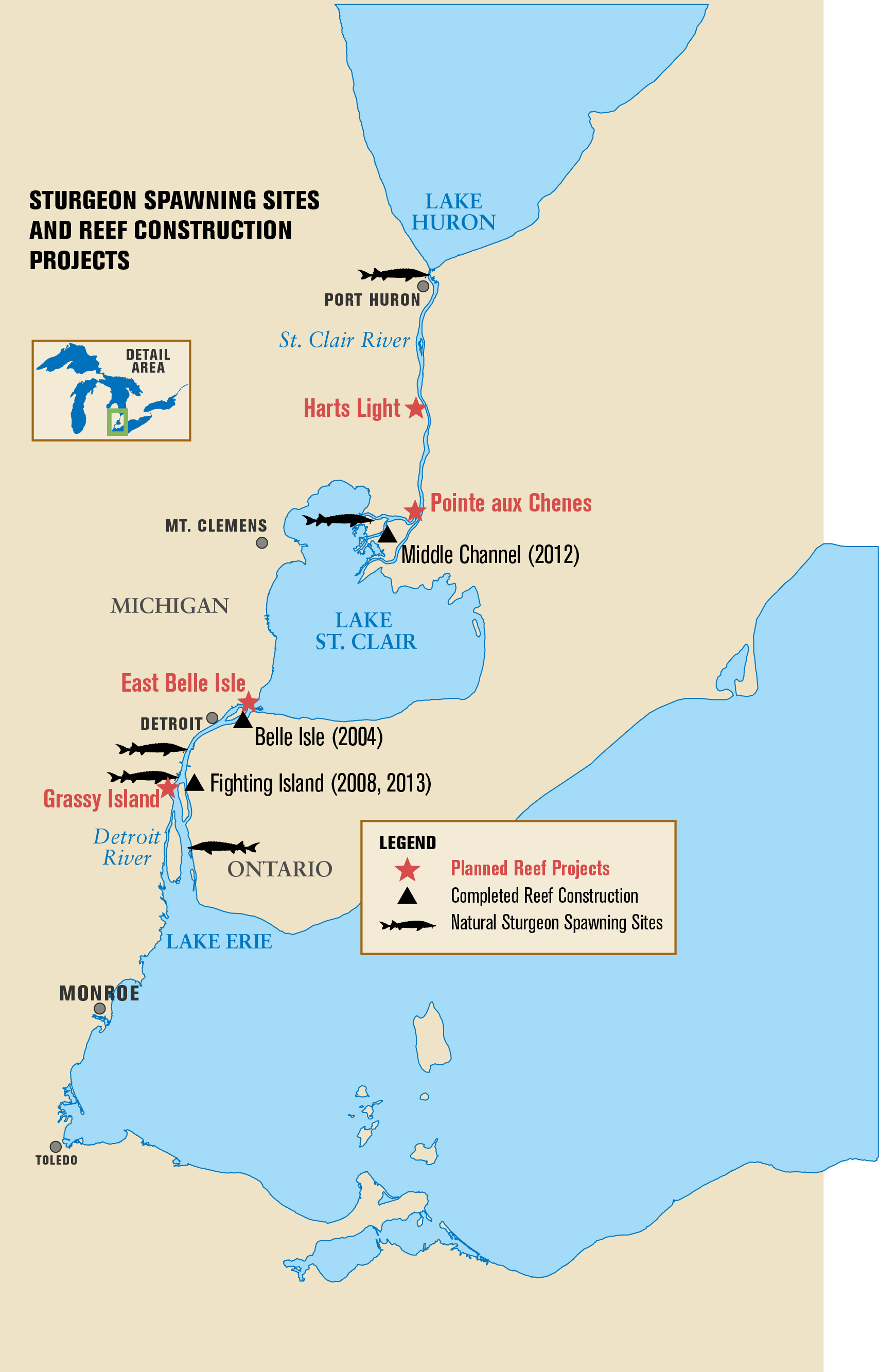 Image credit: Michigan Sea GrantOver the years, the reef builders have experimented with rocks of different type, shape and size. They discovered that the location of the reef within the river channel is more important than the kind of rock.

Deep, swift-flowing waters seem to work best, tempting the target fish species while keeping the rocks free of silt, algae and mussels. Also, the rocks must be piled deep enough to form crevices that protect eggs from being washed downstream or consumed by predator fish.

The reefs built in the Middle Channel of the St. Clair River in 2012 have attracted spawning lake sturgeon for two consecutive years, an indication that the reef builders have hit upon the right recipe, said project leader Jennifer Read, deputy director of the U-M Water Center at the Graham Sustainability Institute.

“These fish seek out rocky areas in clean, fast-flowing water. Unfortunately, most of that habitat type was removed when the shipping channels were created or has filled with silt from agriculture and construction in the watershed. But we’re gradually restoring it with these reefs,” Read said.

“A long-term goal of this team is to create enough fish-spawning habitat in the river so that we have really robust, self-sustaining populations of lake sturgeon, whitefish and walleye,” she said.

The latest spawning reefs will be made from broken limestone blocks 4 to 8 inches in diameter. That size seems to entice native fish while discouraging invasive species such as the sea lamprey and the round goby.

The limestone is from quarries in Bay Port and Ottawa Lake, Mich., and a crane with a GPS-guided clamshell shovel will precisely position the blocks on the river bottom. The work is being done by Faust Corp., a marine construction firm, along with SmithGroup JJR engineers and architects.

Both sets of reefs will be located in 30- to 50-foot waters and will not interfere with personal boats or freighters and will have no detectable effect on water flow or water levels.

The lake sturgeon is the biggest fish in the Great Lakes, and the St. Clair River is home to the largest remaining population in those inland seas. They are classified as threatened or endangered in seven of the eight Great Lakes states.

Lake sturgeon can grow up to 7 feet in length and can weigh up to 300 pounds. Female sturgeon can live up to 80 years, while males live an average of 55 years.

Taken together, the Detroit River and St. Clair River reef-building projects represent the largest effort to date to restore a primitive, wild fish within a major urban area in the Great Lakes region.