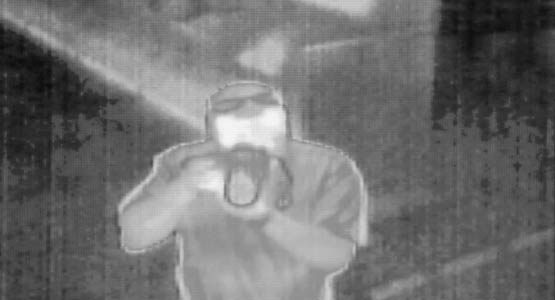 ANN ARBOR—An ultrathin light detector that can sense wavelengths our eyes can’t see has the potential to put heat vision technology into a contact lens, its University of Michigan developers say.

Heat or thermal vision, one variety of night vision, illuminates the heat being emitted by animals, humans, cars, electronic devices and more.

The U-M researchers have built the first room-temperature light detector that can sense the full infrared spectrum. Infrared light starts at wavelengths just longer than those of visible red light and stretches to wavelengths up to a millimeter long. Infrared vision is perhaps the best known variety of night vision. It can also help visualize heat leaks in houses, help doctors monitor blood flow, identify chemicals in the environment and allow art historians to see Paul Gauguin’s sketches under layers of paint.

Unlike comparable mid- and far-infrared detectors currently on the market, the new detector doesn’t need bulky cooling equipment to work.

“We can make the entire design super-thin,” said Zhaohui Zhong, assistant professor of electrical engineering and computer science. “It can be stacked on a contact lens or integrated with a cell phone.”

While conventional cameras can capture the visible spectrum with a single chip, today, infrared imaging requires a combination of technologies to see the whole range — near-, mid- and far-infrared radiation — all at once. Still more challenging, the mid-infrared and far-infrared sensors typically need to be at very cold temperatures.

If we integrate it with a contact lens or other wearable electronics, it expands your vision. It provides you another way of interacting with your environment. Zhaohui Zhong

The material graphene, a single layer of carbon atoms, is able to sense the whole infrared spectrum—plus visible and ultraviolet light. But until now, it hasn’t been viable for infrared detection because it can’t capture enough light to generate a detectable electrical signal. With one-atom thickness, it only absorbs about 2.3 percent of the light that hits it. If that light can’t produce an electrical signal, graphene can’t be used as a sensor.

“The challenge for the current generation of graphene-based detectors is that their sensitivity is typically very poor,” Zhong said. “It’s a hundred to a thousand times lower than what a commercial device would require.”

To overcome that hurdle, Zhong and Ted Norris, the Gerard A. Mourou Professor of Electrical Engineering and Computer Science, worked with graduate students to design a new way to generate the electrical signal. Rather than trying to directly measure the electrons that are freed when light hits the graphene, they amplified the signal by looking instead at how the light-induced electrical charges in the graphene affect a nearby current.

“Our work pioneered a new way to detect light,” Zhong said. “We envision that people will be able to adopt this same mechanism in other material and device platforms.”

To make the device, they put an insulating barrier layer between two graphene sheets. The bottom layer had a current running through it. When light hit the top layer, it freed electrons, creating “holes” – gaps between electrons that act as positive charges. Then, the electrons used a quantum mechanical trick to slip through the barrier and into the bottom layer of graphene.

The positively charged holes, left behind in the top layer, produced an electric field that affected the flow of electricity through the bottom layer. By measuring the change in current, the team could deduce the brightness of the light hitting the graphene. The new approach allowed the sensitivity of a room-temperature graphene device to compete with that of cooled mid-infrared detectors for the first time.

The device is already smaller than a pinky nail and is easily scaled down. Zhong suggests arrays of them as infrared cameras.

“If we integrate it with a contact lens or other wearable electronics, it expands your vision,” Zhong said. “It provides you another way of interacting with your environment.”

While full-spectrum infrared detection is likely to find application in military and scientific technologies, the question for the general tech market may soon be, “Do we want to see in infrared?”

The device is described in a paper titled “Graphene photodetectors with ultra-broadband and high responsivity at room temperature,” which appears online in Nature Nanotechnology.

This work was supported by the National Science Foundation in part through Michigan Engineering’s Center for Photonic and Multiscale Nanomaterials, and was carried out with help from electrical engineering and computer science doctoral students Chang-Hua Liu and You-Chia Chang.